I found recently (while looking for other vehicles) a new project (quite interesting actually) that could fit the tier 10 TD slot in the incoming EU tree. Introducing: 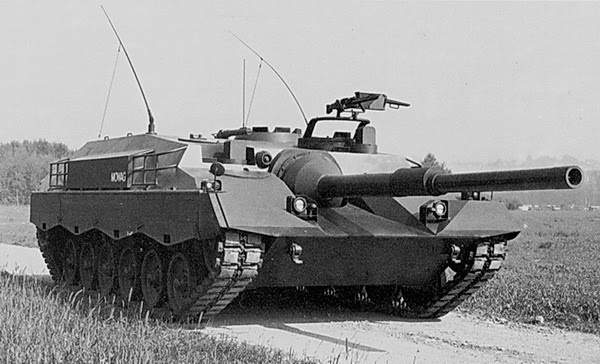 The Swiss company called MOWAG is not a newbie on the field of weaponry. In the 60's, it competed for the German Marder IVF program with its own prototype and later it built several prototypes for the German Kanonenjagdpanzer program. From there on, the company used its considerable experience in creating a line of light tank destroyer designs - the Gepard and the Taifun. The Gepard (looked a lot like the German Kanonenjagdpanzer) was not successful in entering the service and neither was the other similiar project, the Tornado (designed as an IFV). The development of both was privately funded, because the company expected Switzerland to start replacing the old AMX-13 tanks (classified in Switzerland as TD's) and the US M113 APC's. In the end, only a pre-prototype (functional model) was completed and the vehicle never entered service. It can be regarded as one of the last real tank destroyers and most likely (along with the S-Tank) one of the last turretless "oldschool" Jagdpanzers.

The Taifun was basically a development of the Gepard (Tornado) chassis. It was a very light vehicle  - its armor (50mm?) protected the 4-man crew basically only from HE shell fragments and from light autocannon fire (it could withstand only 25mm shells however). The armament consisted of the classic 105mm L7 clone (however, an upgrade to the Rheinmetall 120mm L/55 was considered - not an option for WoT though). The considered turbocharged dieselengine was a 575hp Detroit Diesel 8V-71T - the same to be fitted to the ill-fated Tornado IFV. Combined with the light chassis (estimated 25-30 tons), this vehicle could move fast. Real fast.

As you can see, this vehicle looks badass. It's like the ultimate Jagdpanzer IV on steroids. And crack. And heroin. While the project itself was developed in late 70's (yes yes, I see you all rising your eyebrows now), its roots actually run into early 60's. The chassis is old - it's basically the same (although modified) chassis used for the 60's Tornado - and that's not so bad. The armor is obviously very thin (think 30-50mm), but - as mentioned above - the vehicle is very light and has a very powerful engine, therefore it will be fast. Really fast. Cca 70 km/h on the road is expected and that's just the "basic" powerpack. With upgrades, it could be the tier 10 Hellcat-meets-Jagdpanzer. The main gun is adequate - the ubiquitous L7 is already in the game and despite the fact it would be fitted with advanced sights and other 80's thingies in real life, one can easily imagine this vehicle having Leopard 1-grade optics. Naturally, in order not to get oneshotted by pretty much anything, the suspension would have to be really nimble, which is actually something totally new - we don't have that in the tier 10 TD vehicles.

Posted by SilentstalkerFTR at 9:38 PM 6 comments:

In Russian, the order from up to bottom at each tier is: LT, MT, HT, Arty, TD 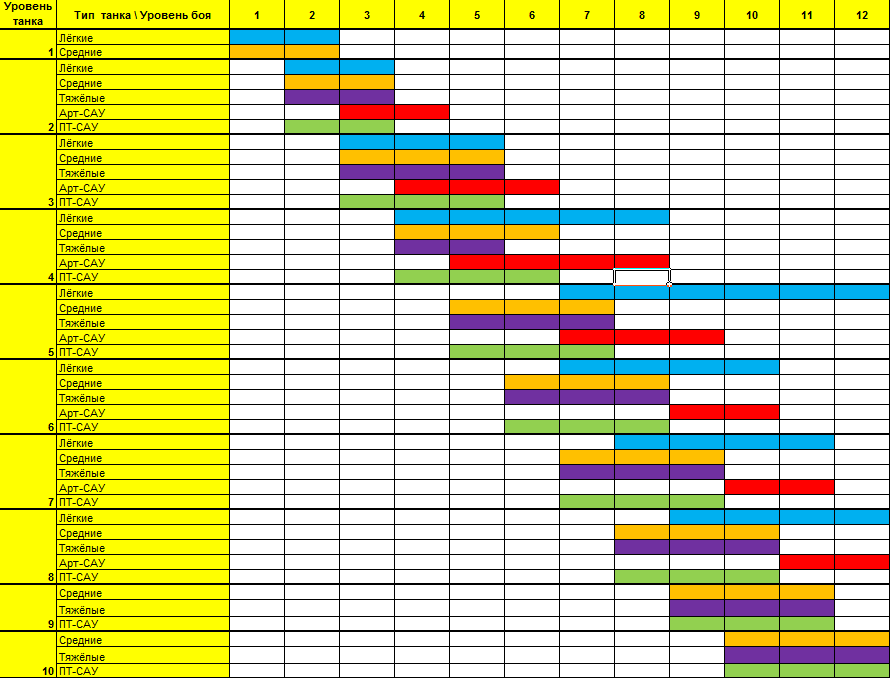 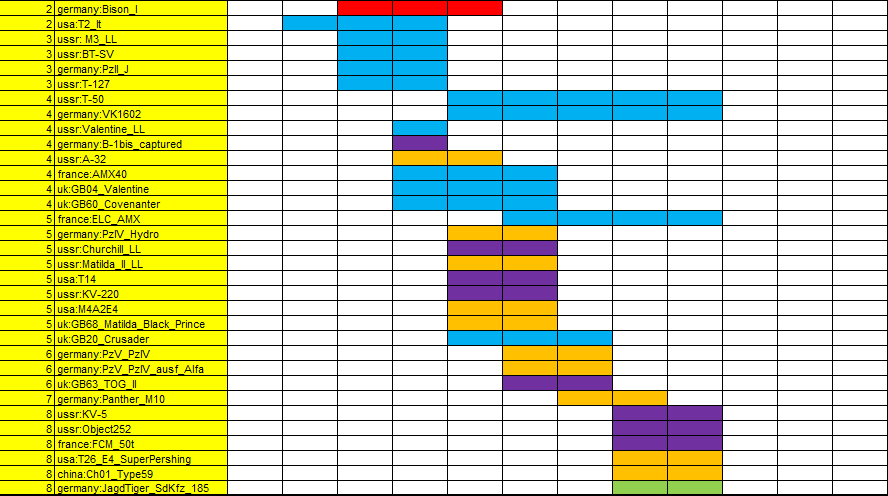 Posted by SilentstalkerFTR at 5:51 PM 3 comments:


- special statistics for CW battles? "Possible, but not soon"
- SuperPershing was modelled after the book from Hunnicutt plus the data provided by the experts from the US WG office
- apparently the second WZ-132 engine (that differs from the stock one only by 10kg weight) is okay the way it is
- if you destroy an enemy tank without anyone spotting him (for example by firing at tracer source), it counts as if you lit it up yourself for the sake of XP award
- the platoon and company hangar interface will be changed a lot to provide better functionality
- SerB is answering players' questions voluntarily - if he gets annoyed or tired, he'll stop
- German 2nd TD branch is partially modelled already ("it's done when it's done")
- Q: "Was Jagdpanzer VII Jagergepard considered for implementation?" A: "Yes. No comment for now."
- regarding the implementation of more very exclusive vehicles (Panzer IV/V, A-32 - style): "If needed, we however don't focus on exclusivity"
- E-50-, E-75-based and postwar German TD's? "We won't comment that for now in order to avoid questions like "when?!" "
- In the Russian movie "Приказ: огонь не открывать" (Order: do not open fire) (about the Japanese-Soviet war), Soviets made fake Japanese tanks. SerB states that they are based on the MTLB chassis and it's hard to say what Japanese tanks are they trying to imitate.
- tank crews have 1hp, that's why almost every shot that kills a crewmember continues further (with full strength) (SS: I hope I understood this correctly)
Posted by SilentstalkerFTR at 4:38 PM No comments:

....was apparently caused by "hardware failure".


Q: And EU server has crashed again,same shit happened last week too :(
A: Hardware failure. Its not related to the capacity.

A: It wasnt scheduled. One of the servers went out of the order. Guys are investigating the reasons. Prem accounts are compensated when certain downtime threshold is met.
Posted by SilentstalkerFTR at 11:31 AM No comments:

Storm on the topic of maps - part 2

Storm on the topic of maps

- Dragon's Ridge and Serene Coast will be removed from the map pool for re-work in 8.4
- some maps' terrain will be revolved (to be less "bumpy"), namely Prokhorovka, Abbey, El-Halluf and Ruinberg (specifically the holes in the streets are the issue)
- Redshire and El-Halluf will have their gameplay changed
- Swamp and Komarin will return, after they are re-worked visually

From the discussion (not much there really)

- apparently, there two different teams in the map department: one does the maps purely visually (artists), one cares for the gameplay. In the past there have been interviews with the first team, that does only the art part, leading to player rage that "WG doesn't care how well the map is played as long as it looks good"

AND offtopic: TXAA antialiasing is not yet developed

PS: If you speak (or - write) Russian, you can leave your opinion there.

Posted by SilentstalkerFTR at 11:28 AM 4 comments: