As I mentioned in my previous article, Finnish armored forces are interesting. Why? Because all the armored forces, relying on improvisation are. Some of the most creative designs came to be in countries such as Finland or former Yugoslavia, both of which had "to do" with what they had at the moment.

Finland armored forces were never really large and until the German Panzer IV and StuG imports, they relied on outdated Soviet and British designs, sometimes turning them into some pretty interesting conversions, such as the BT-42

When Finnish armored forces are discussed, lots of people ask about BT-42. For those who don't really remember, it was a BT-7 hull with a turret-mounted 4,5in (114mm) obsolete British howitzer. On World of Tanks forums, this vehicle recieves (undeserved) attention, because when talking about it, people start to drool about the prospect of driving around in a fast BT-7, derping the hell out of everyone. Nothing could however be further from the truth: the whole thing was hideously sluggish and it was nearly useless too: the howitzer's HEAT rounds were practically pointless and the HE rounds were useful only against soft targets. The vehicle was a nightmare to drive, the overloaded chassis broke down all the time. This is how it looked: 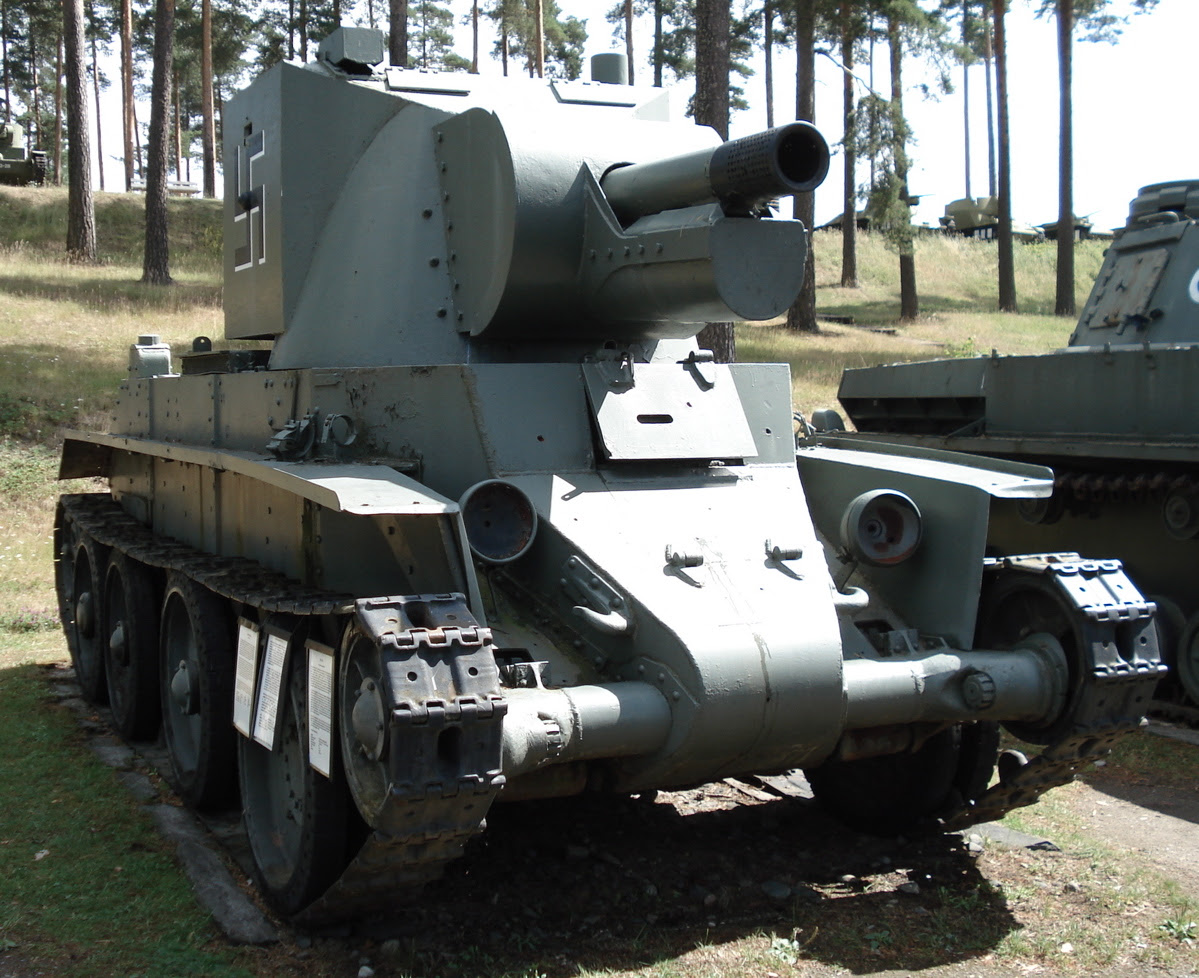 Either way, some of these vehicles were used against Soviets with very limited success. Not ideal. But there were other conversions.

One most of you probably never heard about was the "120mm Krh/40 varustettu T-26" ("T-26 with 120mm Krh/40 mortar"). It was a 1944 project to arm the T-26 hull with the aforementioned mortar. The idea was to make an autonomous mortar battery with 12 of these vehicles. The first mention of this vehicle is in the communication between Gen. Lagus and Col. Björkman from 23/24.4.1944. As the weapon to be used, the outstanding 120mm Tampella Krh/40 mortar was selected. The prototype was introduced to the soldiers on 25.7.1944 in military school in Niinisalo. For reasons unknown, the prototype was never accepted to service and some speculate that it ended its career converted into an artillery tractor, namely the T-26V (the Finnish, replacing their obsolete T-26's with German Panzers gradually, wanted to convert the obsolete tanks into artillery tractors under the designation of T-26V, however, only 3 were converted in the end).

This is a photo from the presentation: Does it have any importance for World of Tanks? Well, I doubt it. Apart from it being a possible artillery piece for the upcoming tree - but of course, the mortar couldn't be lowered to 0 elevation and fired, so its implementation would be problematic. The iconic BT-42 hower will probably appear at some point, possibly as a lowtier tank destroyer (it was capable of direct fire too, but it did not fare very well), or artillery piece.

- SerB uses his own ideas to improve the game, not the community's: "90 percent of ideas from gaming community are stupid, 9 percent are not realizable and 0,99 percent from the remaining 1 percent are already planned"
- apparently the German "dunkelgelb" yellow color scheme won't be implemented as base color (SS: unclear whether it will be implemented at all)
- apparently the Jagdmaus is not planned for now (SS: I am not sure the player asking was referring to Jagdmaus, it's my guess)
- T-34 has two engines: 480 hp and 500 hp - the difference is 4,2 percent increase, but according to SerB this does not mean that when buying the new engine, the overall tank dynamics is increased by 4,2 percent - the difference is apparently more, because the hp-dynamics increase is nonlinear
- several tanks have more rangefinder modules that affect visibility (for example the Object 907, which actually has 4 crew periscopes) - hitting more than one doesn't however decrease the tank viewrange even more, for viewrange calculation they all count as one
- according to SerB, the Jagdmaus had the same armament variants as the Jpz E-100 - 150mm and 170mm
- more special T10 vehicles are not planned for now
- the special T10 vehicles will (according to SerB) be very difficult to get
- there were cases where other developers wanted to implement something and SerB said "no" (and personally blocked it), but also cases where other developers didn't want something, but SerB pushed it over disagreement personally - but he won't give any details
- Q: "Why do all trees make the same sound when they fall?" A: "Because the game is not called World of Falling Tree Sounds"
- IS-6 gun won't be buffed ("Don't play IS-6")
Posted by SilentstalkerFTR at 12:19 PM 94 comments: