Long time readers should know how this works, but for those just joining us, send me questions to tankarchives@gmail.com, and I will answer them! Previous edition is found here.

Q: I saw this thing in Nasledniki Tritsat'chetverki (Descendants of the T-34). What is it?
After evacuation, factory #183 was ordered to produce a T-34 with multiple guns, like the KV-7. Morozov, seeing multiple gunned platforms as a complete failure, designed a project so awful, it was bound to fail. Theoretically, three people were supposed to fit into that turret, as well as 14 76 mm shells and 44 45 mm shells (90 76 mm and 204 45mm shells in total). Due to this crampedness, the turret could not rotate more than 25 degrees to the right, or it would cut the loader in half. Senior military representative at factory #183 Kozyrev writes on December 21st, 1941: "The construction bureau finished work given by People's Commissar Malyshev: powerful flamethrower tank with a 900 liter tank and a 45 mm gun...and mount with an F-34 with two 45 mm guns. The goal of the first development is clear. The goal of the second (T-34-3) is not."

Q: Would the ZiS-S-53 fit into the T-43's first turret? I recall that one of the reasons the cupola was moved from the center to the side was because the 85 mm gun's recoil mechanism did not allow the commander to sit there.
A: The T-34 "second variant" with the commander's cupola to the side was developed with a 76 mm gun, so the 85 mm gun's recoil length could not be the reason. But, let's see if it would fit. The recoil length of the ZiS-S-53 was 330 mm. The recoil length of the F-34 was actually larger: 390 mm. My books don't give the exact length, but by measuring the diagrams, the breech to recoil mechanism length of the ZiS-S-53 is 84% of the same length for the F-34. So the gun could have fit without castrating the commander with every shot.

One other thing is the turret ring size. The turret ring on the second variant was enlarged from 1420 mm to 1600 mm. The 1420 mm turret ring was tested with an 85 mm gun on it, but I don't know what the results of those tests were.

Q: Soviet MBT are well known for having auto loaders, but how early on did Soviet tank designers start to look at tank auto loaders? Any WWII era tanks?A: The T-64 was the first Soviet mass produced tank with a true autoloader mechanism, one that replaced the loader's position entirely. However, the Soviet tendency to want tanks to be as universal as possible led to large calibers being used. Past 85 mm, a manual loading process wouldn't have yielded a very high rate of fire, and the IS-2 was notable for its 1-1.5 RPM on release. The mind behind the KV and IS series, Joseph Kotin, writes: "I had a habit of following tanks to the front lines. I don't ride them into battle, but I examine the aftermath. ... I remember we tested an IS. The shell was heavy, the loaders complained that loading takes too long. I climbed into a tank, tried to lift a shell, and confirmed that it was very heavy. I needed to do something. The [Kirov] factory quickly developed a special mechanism for loading shells into the breech." Kotin's device seems to have been effective. In a letter to the Commissar of Armament Ustinov, concerning re-armament of the IS tank with a 100 mm gun, the engineers wrote "We consider it imperative that the D-25T remain in the IS-2. Latest trials at the ANIOP resulted in a rate of fire of 4-6 rounds per minute".
A mechanical rammer was used in the IS-5 (IS-100), but it caused a problem: a relatively large shell, combined with a high rate of fire, led to lots of gases collecting inside the fighting compartment. A bore evacuator could have been used, but the entire program was deemed unnecessary due to the more than adequate performance of the IS-2 against armour.

Q: What kinds of improvised defensive measures did soviet (and maybe other nationality's) tankers use in battle to defend their tanks ?And what was the expected and actual results of their experiments in the field ?

A: Everyone has heard of the Soviet "mattress armour". It wasn't particularly effective against Panzerfausts. In Soviet tests, even German skirt armour was ineffective against a Panzerfaust at 12 meters, let along mesh armour. Track links were welded on to tanks by all nationalities (there are many photos of German tanks with T-34 track links on them, since they were larger). However, that was not the best idea, since the way of making armour of multiple hardnesses work properly is hard armour, then soft armour, not the other way around. 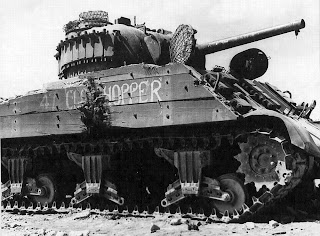 That's it for this week! There are some very long questions that came in that I will need to do some research to answer, and those will be posted next week. Keep sending those questions in to tankarchives@gmail.com!
Posted by Peter at 7:08 PM 11 comments:

Developers haven't answered anything today, I'll just add a few answers I forgot from the last of the Storm's blog posts:

- tracers weren't removed because the players were complaining about the "Star Wars blaster effects", this has nothing to do with the real reason (SS: which was the fact they got hacked)
- the new sound system (crew comments) will come in two versions: long and short one. Long one means that the commander will talk to you in whole sentences ("The engine caught fire because it was hit") - this is mostly for the newbies, so they know what's happening and why. Short one will only say everything in one or two words ("Fire"). The players will be able to enable the shortened system in game settings.
- linear XP requirement for more perks was scrapped, because it's bad for average players, XP requirements for skills/perks won't be reduced
- gear changes sound will be implemented

Oh and one more thing: tomorrow there will be no updates from me, because I am going to be very busy. See you on Tuesday!
Posted by SilentstalkerFTR at 6:32 PM 41 comments: