The Maus That Roared

Edit: to "smart" people thinking this is an April's fool - republished it, it's after midning here, no - it's a serious article. Happy?

one of the iconic vehicles of the Third Reich and the testament to Dr. Porsche's ingenuity is the Maus, mostly because it is (and probably always will be) the heaviest tank ever built. Most people know the vehicle itself, but there are other (less known) vehicles (in two cases derivates, in one case a different vehicle) bearing the name Maus. Let's have a look at them. 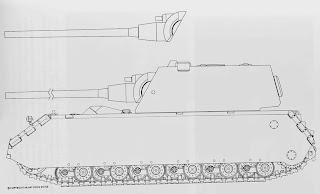 Maus II - as the name suggests - was the followup on the Panzerkampfwagen VIII "Maus". Basically what happened: the history of Maus development itself is quite complicated and covered sufficiently in other sources. The development took place mainly in 1943, with 1944 being the trial year for the two manufactured Maus prototypes.
In March 1944, as Ferdinand Porsche was trying to get the Maus production on track (it didn't have to high a priority and there were numerous delays, a lot of them being at Krupp facilities), Krupp designed an improved turret to the original Maus hull, designated "Maus II Turm" (Maus II turret). It was to be armed with the 128mm KwK (presumably KwK 44 L/55) and the 75mm L/24 gun above (!) the main gun, with a breech redesigned by Krupp (the 75mm served for close support). This turret required a larger turret ring, which was discussed between Krupp and WaPrüf 6 in April 1944. Other changes included an improved ventilation system, cartridge fume extractor and a different (slightly narrower) rangefinder. Krupp also proposed the frontal turret armor to be sloped instead of rounded.
In May 1944, Krupp was asked to make a mockup and in August, in the last mention of Maus II project, Krupp representative stated they are working on a mock-up, based on the existing Maus I turret model. After that, all the traces disappear and that was probably the end of Maus II. Here, you can compare both the "regular" Maus and Maus II turrets:

World of Tank wise, Maus II would provide a historical tier 10 alternative to the regular Maus. Balance-wise, those are quite similiar vehicles, but the Maus II turret is better armored. Why the hell did Wargaming go for the completely fake Failowe (AKA 72 ton project which itself is extremely dubious "stretched" to double its weight), I have absolutely no idea.

SturmGeschütz Maus was the alternative program to the SturmGeschütz E-100 (often - incorrectly - referred to as Jagdpanzer E-100). Amongst the modellers, this vehicle is known (also incorrectly) as "JagdMaus".
Both project originate at the same point in time. On 9th May 1944, a meeting was held between Porsche and Krupp, where Ing. Schmidt from Porsche presented sketches of the 150mm L/63 and 170mm L/53 Sturmpanzers based on Maus chassis, developed by Krupp in cooperation with Porsche, that were to compete for the superheavy Sturmpanzer contract with the Adlerwerke and their E-100 - based Sturmpanzer.
In May, the discussions continued with the 150mm variant being favoured over the 170mm. Porsche tried to "smuggle" a Flakaufbau (anti-aircraft miniturret), but that was denied, as it was planned for the superheavy vehicles to be escorted by AA tanks (Flakpanzers).
The plans never reached any serious stage however. In May 1944, there were only rough sketches and conceptual ideas (none of which unfortunately survived, the picture of the model above is only a modeller's impression, how it could have looked). One of the issues of the design was the height - the tall Maus chassis and the superstructure simply made a very tall vehicle, despite the fact Krupp mounted the observation equipment into the superstructure. The ammo capacity of 85 rounds was planned.
By the end of the May it was decided the E-100 chassis would fit the project better (we can speculate it was the height issue). A mockup was ordered, but it never really happened. On 10th of July, Adolf Hitler personally stopped the development of all superheavy vehicles via Albert Speer (the Maus project itself was worked on until August) and that was the end of both superheavy Sturmpanzers.

The Tiger-Maus design history is confusing. It's a prime example of how terribly mixed up the German panzer history was and how different designs influence each other. The basic story is (in layman terms) following (I'd like to thank Zarax (EU) for helping make sense of the intertwining projects):

In March 1942, Germans are no longer meeting a disorganized and devastated Soviet tank troops of 1941. Some seriously tough tanks are encountered, namely the T-34, KV and the KV-2 heavy vehicles, which - although relative rare, horribly unreliable generally a (in the words of S.Zaloga)tactical failure, cause a scare. By that time, Hitler (and the industrialists) start to actively play a role in Panzer development - him specifically by ordering (influenced by his personal friend, Dr. Ferdinand Porsche) all sorts of retarded ideas, mostly in the "we need it bigger" direction.
On 5th March 1942, Krupp recieves a directive that it is to inflate the earlier concieved 70 ton Panzer projects (the Löwe series) to 100 tons, so the new supertank is ready at the latest in Spring 1943. Later in March, Porsche recieves the same order and that's how the Maus development actually started. The "Löwe" line is developed in parallel to a certain extent (the last known heavy Löwe variant - with turret set in the middle - is from May 1942), but in September 1942, the Löwe development is cancelled and onwards goes the Maus.

I'll get a bit offtopic here: this is where the "Failowe" comes from in Yuri Pasholok's mind. Basically, there historically there were three "branches" of the German superheavy Panzer development: the Maus branch, starting with a VK100.01 project by Porsche, moving on to the Maus and ending with Maus II with the new Krupp turret. Second branch is the E-100 branch by Krupp (later Adlerwerke), being a direct competitor to the Porsche Maus project. This branch started with the Krupp E-100 proposal, the Tiger-Maus and ends with the Adler E-100. Third - blind - branch is the Löwe branch. This branch is older than the Maus or E-100 branches (the earliest Krupp VK7001 - Lowe predecessor - proposal is dated at 27.2.1942) and never exceeds 90 tons (which is the last Lowe project from May 1942, armed with a 150mm L/40). This branch gets completely cancelled (the last remnant of it - the turret - gets, as mentioned, cancelled in September 1942) and from that point onwards, there is only one superheavy tank program, for which two companies (Krupp/Adler and Porsche) compete with their projects. Yuri Pasholok believes that by disinterpreting one line in Panzer Tracts 6-3E (1st page), he "proved" the existence of a 120 ton unspecified Löwe offshoot, that actually "survived" the Löwe cancellation and later "competed" for the Maus/E-100 contract (the model itself is an early Lowe mutant with turret in the back). It's a complete crap and for historical materials, I will link you to Zarax's article on the matter.

Back to the Tiger-Maus. The whole Krupp Tiger-Maus 150ton tank concept came to be in September 1942, shortly before the Lowe turret development cancellation. Krupp was basically "taunted" into making a competing concept to Porsche's Maus - a 150ton tank powered by a proposed HL230 1000hp upgrade. The design was made very quickly and in November 1942, it was discussed within the Panzerkomission (a civillian committee of industrialists and tank designers).
It was to use the Tiger(H) components, hence the name - including the engine and drivetrain, but there were worries about the insufficient horsepower to weight ratio. The Tiger-Maus was to reach only 20km/h top speed too and its terrain passability (specifically climbing ability) was questioned too. Additionally, there had to be a new final drive and steering unit designed, as the old Tiger one limited the speed further to 13 km/h. Possible engine upgrades, discussed in November 1943, included the Daimler Benz MB501 and MB503 1200hp gasoline engines and the MB507 1000hp one.
In the end, the Krupp hull weighted 122 tons and was to be powered by a 1200hp MB507 engine. The armament was the 150mm L/37 gun and a 75mm L/24 secondary cannon in a 47,5ton turret, making the vehicle nearly 170 ton heavy. On 1st December 1942, the project was named "Tiger-Maus".
During the further development, significant changes were made. By shortening the chassis (and widening it for better ground pressure), the proposed weight dropped to 130 tons and the drivetrain components were taken from Tiger II. The engine used in the end was the Maybach HL230 with 700hp. The armament remained the same, the vehicle had a proposed crew of six. The vehicle had the advantage that it used many existing components and could be quickly produced - the 130t design was ready on 8th December 1942.
It was recieved very favourably at first - but then, arguably F.Porsche's friendship with Hitler played a role and the decision to develop this vehicle further was overturned. On 15th December 1942, Krupp recieved an order to stop the Tiger Maus development, allegedly because the German military wanted to avoid the dual development fiasco of the Tiger and Porsche's Maus was scheduled for development instead of the Tiger-Maus. Krupp representatives even met with Hitler personally, but without success - on 31st December 1942, the Tiger-Maus development was stopped.

The Tiger-Maus later turned into the E-100 project by Adler, but that is a story for another time. There are no original Tiger-Maus drawings unfortunately, so we can only guess how it could have looked. it probably resembled the later Adler E-100 project, there are some rumors however that the design might have had the turret set more to the back, even to the point of resembling the Porsche Maus. Personally, I doubt that.

What is NOT a real project 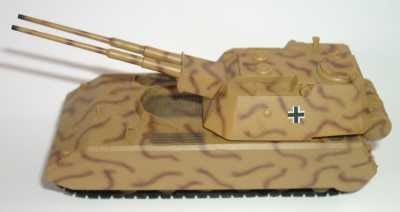 This is a model of a "Flak Maus", armed with twin 88mm guns. While it looks cool, it wasn't made by the Germans, it was made by some modeller, it's a complete fake, there were no plans for such a vehicle.

Another popular fake is the "Sturm Maus" or "Sturmmörser Maus" (not to be mistaken with Sturmgeschütz Maus, which is historical) - a Maus chassis with a 380mm rocket mortar, used in Sturmtiger. Again, it's a complete fake, but it does look cool:

Posted by SilentstalkerFTR at 11:07 PM