Thanks to Tengelsen for wonderful gold donation, much appreciated :) (sorry, noticed your gift too late) 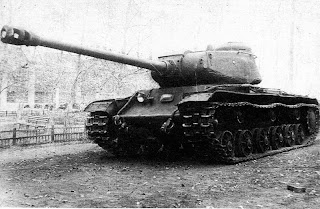 - the vehicle on the above picture is KV-122 by the way. It's possible that in time, KV-1S will move to tier 5 and will become a hull module option for the KV-1 for more historicity
- SerB states that the "maps are being remade for arty to better hits tanks behind covers" is just a conspiracy theory
- SerB states that during war and post-war firing tests in Kubinka, no side-effects of Zimmerit were ever confimed. Recently, very simple tests were made with magnets and it was found out that Zimmerit has no effect on magnetic mines. It's possible the whole Zimmerit project was made for other reasons

SS: to explain this - there are various theories and hoaxes running around about Zimmerit. The most common are that Zimmerit caused more vehicle fires when shot - it didn't - and that Zimmerit caused enemy shells to penetrate better - again, it didn't. Personally, from what I could find out, in very thick layers (we are talking 5cm or so, which noone applied on tanks), Zimmerit can probably disrupt magnetic mines (just like a piece of wood of the same thickness would), but it doesn't have any side effects and in the setup Germans used it was useless. Nevertheless, some Allies (Americans I think) actually thought that since Germans do it, it must have SOME use and therefore started using captured stock at one point. I believe that the common WW2 author consensus is that it useless. Looked good tho.

- SerB doesn't consider the Saukopfblende gun mantlet (Jagdpanzer IV for example) underpowered
- Jagdtiger hull thickness won't be buffed
- Mark IX Centurion turret is different from Mark 2,3,7
- theoretically the L7 could fit into Mark 2,3,7 Centurion turrets (won't be implemented)
- it's possible Centurion will have its speed increased to 48 km/h
- it's possible (and desired by SerB) that the Chieftain prototype will be introduced into the game, they are looking for proper data for 6 months already, SerB promised to rush the search
- the FV215b 183 won't probably have its ammo capacity increased to 15 pieces
- SerB states that the fact that Himmelsdorf houses are so close to each other is historical and based on old German cities
- SerB doesn't consider the Sturmpanzer II with gold ammo overpowered in 8.6
- SerB admits that the 198 pen for 75mm L/70 was not historical, it will also likely not be solved by using APCR shells for the gun as silver ammo (also unrealistic for 1945)
- the new camo system rollback was caused by a great amount of bugs in camo
- when various models of one tank with different setups (turrets, guns) historically had various numbers of crewmembers (KV-13, Hetzer), the crew amount obviously remains the same. Developers know about this and don't consider it too important, unlike errors in vehicle armor.
- SerB states that they are TRYING not to change premium vehicles, but they do have the possibility according to Terms of Use
- will teamkillers be punished more? "If necessery. We decide what's necessery."
- theoretically, some nations could have 2nd arty lines - but that won't be implemented for now
- on unhistorical E50M: "If you find us a more historical E50M, we will immediately put it into the game" (SS: how did that Weserhütte E-75 go, Zarax and Daigensui? Did anyone on Russian forums mention it?)
- currently, modelling works has begun on the Japanese branch (SS: the German TD's are allegedly already modelled)
- (as a sum of several SerB's posts) SerB basically doesn't care about the Superpershing shitstorm, he mentioned that he developed immunity to whining
- the increased accuracy for guns is fine according to SerB
- the speed of sound (delays between shots and sound) might eventually be implemented into the game, but has a low priority
- the "invisible enemies" camo bug has been found and fixed
- it's not yet clear whether the British tier 8 premium tank will be a medium, or a heavy
- for now the Lowe will not be removed from the shop
- SerB states that it's normal for vehicles to be rebalanced after a while when they come out on live server, test server is not enough to balance them once and for all
- SerB confirms that the source for E50M was Spielberger's book, but also states that the project from the book did not meet success and had to be "further developed" by WG


Bonus: Vallter (one of the developers) on the new reward system

I've seen a lot of questions all over the forums regarding the following message on Public Test server: 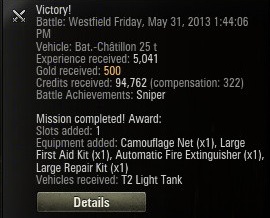 In this post you may find some explanations to this.

The case is that in 8.6 we enable a new functional for automatic in-game events - 'Missions'. Shortly, these are combat tasks, for completing which players will receive certain award. There are lots of variants for Mission conditions that allow us to create really interesting challenges. In the same time there are a lot of awards, which may be received for completing this missions. In future we will even add some unique things....

You will be able to check them out on the live server in July (most probably). Currently we are just testing the functional on Public Test that's why no specific announcement was made. We want to test as much parts of the functional as possible, that's why missions are quite easy, different, and provide lots of rewards.

I would share more with you, but I cannot atm. Stay tuned and follow our official portals in order to receive more information in future.

Thank you for reading and... What are your thoughts on this?

Posted by SilentstalkerFTR at 6:47 PM