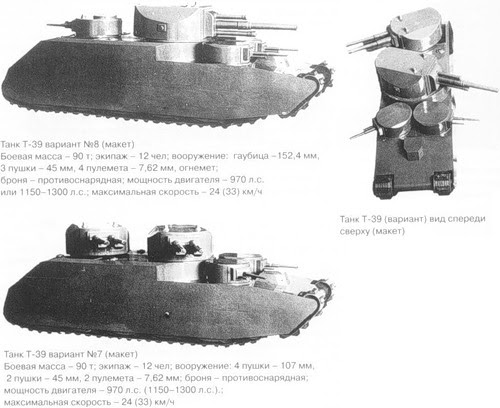 The T-39 tank was designed to be a breakthrough tank. With a rather ridiculous 4 turrets, and up to 90 mm of armour, the tank was even more powerful than the KV-1 and KV-2 that would follow it 6 years later. A number of options were presented. Two options were deemed the most viable, and made it as far as wooden models.

In real life, the T-39 was exceptionally unrealistic, and all work on it stopped in favour of the (also pretty useless) T-35 tank. However, World of Tanks is just the place to go to see how well ill-conceived prototypes would perform! Let's take a look.

The powerful 107 mm guns don't show up until tier 6, with the KV-2 and T-150. The T-150 has a comparable amount of armour, so you'd think that a T-39 would fit in the same tier. However, four 107 mm guns would mean four times the rate of fire, and 300 damage from each gun (or 1200 in total) would melt any tank of that tier, as well as most tier 7 vehicles. Even if the 45 mm turrets are completely vestigial (like the machine gun turrets on the T-28), this tank would be massively OP at tier 6.

Perhaps, at tier 7, the T-39 could find a reasonable home. The turret placement requires it to show its side before it can use all 4 of its guns, and even if it doesn't, that driver's box in the front is an excellent weak spot. It could be like a TOG: huge and slow, with no armour, but lots of hit points. It would probably have to be restricted to its initial engine configuration, and travel at 24 kph, at most.

This one is a lot more reasonable. Instead of two main turrets, there is only one. Plus, due to the 45 mm turret, it can't point backwards. The gun is more like the 152 mm gun on the SU-152, longer, faster, and more accurate, than the KV-2's gun. A slower KV-2 that can't shoot backwards would settle in nicely at tier 6 or 7 as a premium. At this tier, there is no use for the 45 mm guns either.

Despite powerful armament, this tank does not have very much armour. The sloped 90 mm plate in the front doesn't do very much to compensate for its sides (20-50 mm thick) or its lower glacis (45 mm thick). There is also a glaring weak spot that the driver sits in, inviting any opponent to make your slow tank even slower.

While the 152 mm gun option is more likely (it doesn't even need multiple turrets), both would be excellent crew trainers. 12 crewmen means you can train as many as 3 Soviet heavy crews at once!

Read more about tank history at my blog.
Posted by Peter at 11:45 PM