We probably had a great discussion on the forum after I posted "Digging Deeper (1) - Shell Normalization". But there was also a lot of confusion. I came to the conclusion, that there are a lot of misleading sources on the web, mostly written by people who are simple not deep enough in the theme of armor penetration.

For anybody who is interested - I added on the end of my article (link is above) a FAQ, which covers most of the confusing parts. Feel free to post a comment or ask me something.

What I posted were values based on tests, these tests were summed up in graphs and then again proven by combat data. That is the basic idea and the really great thing about "WWII Ballistics- Armor and Gunnery".

At the end of this summery I would like to show you page 92 of [1]. The British BIOS engineers support my conclusion of armor penetration - mechanics and thus also the way of "normalization" I concluded.
Have a look at the first picture, you can see here that the way a projectile goes trough armor is more than armor/cos(angle) suggests - in other words, positive normalization. 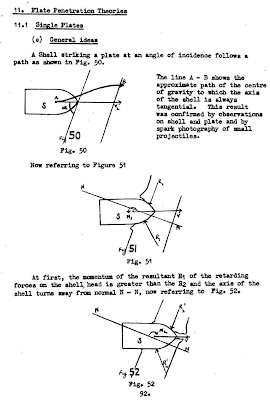 Posted by Thor_Hammerschlag at 10:31 PM