As a rather... biased player of British Vehicles I want to make a case for a couple of replacement vehicles, or alterations to existing tanks. I've got a couple of ideas, mainly for end-tier tanks within the British tree.

For starters, for better or worse, the first Tier 10 tank of mine was the FV4202.

Perhaps not the best idea? Not the most awful tank at T10, but its lack of an “effective” gold round hampered my play and made me a laughing stock within my clan at my inability to properly engage heavy tanks. My second T10 (the FV183) has some of them cringing and others curiously asking me.

“Just what were the British thinking?”

This isn't helped by the mostly fictional FV215b (120mm), either, which received a buff that seemed to hurt, rather than help it.

First, a little bit of education on British doctrine, then, some suggestions for some vehicles and some changes to existing tanks.

The British and the Germans seemed to switch doctrines post-war (or, more accurately post-Korea) Where the ultimate second world war German design of a medium included a powerful gun and decent armour (as seen in the Panther or mythical E50 design), the British chose the more lightly armoured Comet and Centurion tanks.

European powers after the war (particularly Germany and France) did not believe that armour protection was as important as speed and firepower and saw the rapid increase of armour penetration (including HEAT rounds and anti-tank guided missiles) as the death of armour. The assumption was that armour could never be developed as fast as the guns and ammunition that could defeat it.

The British experience couldn't have been any more different. Experience in Korea showed that tanks absolutely should be sufficiently armoured, for fear of being knocked out by light or medium artillery, or tanks that may have been many generations behind. During early development, the British had a specific request that the new tank could be able to defeat hits from “medium artillery” (one could assume in the range of 105mm-120mm) with suitably thick frontal armour at extreme angles to provoke deflections and maximize the armour’s effectiveness. They also demanded that gun depression should be no less than -10 degrees, and elevation at least +20- experience also gained in the hills of Korea.


An important note was that the British felt during that time frame that the best weapon to kill a tank is, in fact, another tank (this should be done at range, with a tank that is markedly superior to it's competition) while the Germans considered the best killer of tanks to be a highly specialized vehicle, either a self-propelled gun such as the Jagdpanzer series or a vehicle carrying missiles.

Many of the techniques required to build the FV4201 were tested in the FV4202, such as the reclined “supine”driver's position and the mantlet-less turret. With it's strange, tiny turret, 120mm gun, and an almost Russian-looking pike nose, it would make an interesting tank.

Armour effectiveness, if the 72 degree angle is taken into account, with a 120mm thickness, would be as high as 388 or, if the listed 85mm is true, a still respectable 275mm thickness from line of sight. And while it has a well angled upper frontal plate, its lower plate is 76mm at 45 degrees- barely enough to protect it from low-tier threats. Upper plate would be 100% autobounce. Its engine would most likely be an early version of the Leyland L60, which was plagued with faults, poor horsepower and the tank's rapid increase in weight only made this worse.

The early prototype of the Chieftain would be an interesting vehicle. With well angled frontal armour, an angled and sloped turret, low overall profile and respectable gun, early Prototypes were armed with the L1A1 gun, later with the improved L11 gun. It would have a rather unimpressive engine, a top speed of 40 kph
(governed, as normal) with a rather unsatisfactory HP out of it's engine and poor power-to-weight ratio.

The actual Chieftain is not actually outside of what is allowed in world of tanks, particularly the early versions. It has no composite armour, it still has a rifled gun, traditional gun sighting systems (not too dissimilar from the Centurion) and is powered by a rather conventional multi-fuel engine.  Prototypes P1-P6 were built in 1959 and onwards and data was assembled from these vehicles to produce the production Chieftain. 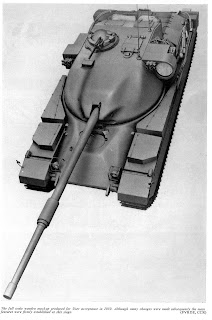 This vehicle is actually a disaster. I'm sure this isn't news to most people but it's a mostly fictional vehicle. The 215b programme was designed to mount the massive 183mm gun onto a chassis for testing purposes, and the rear-mounting was required to balance the weight of the huge gun across the chassis. What sense is there in rear-mounting the Conquerors turret onto the rear when it fits in the centre just fine?

It's current armour isn't historical and was simply added by wargaming to make the tank feel more like a heavy. Perhaps the tank's model shouldn't be wasted as it isn't outside the realm of possibilities, considering the mere existence of the Caernarvon.

My suggestion is a gameplay based one, mainly. Speaking from a game design standpoint, the problem with the current FV215b is that it doesn't have a niche. It just doesn't do anything that the T110E5 does better- aside from a tiny bit more DPM, inferior armour, poor gun layout and engine fires, I suppose. I think perhaps moving the vehicle as a Future T10 Tank Destroyer for a possible Turreted line would be best.

Return it's armour to pre-buff levels, flip it's gun stats with the current Tortoise's gun. You could lower it's health to 2200 – 2300. You'll have an interesting T10 TD that relies not on alpha (like many of the TDs), and yet, not an autoloader. Rather, you'd have a TD that can reliably hit a target every 6 seconds for a reasonable amount of damage with good soft stats (accuracy on the move, turret rotation accuracy, gun accuracy, penetration, etc.).

Much like the 183 is a TD that seems exclusively designed for close range “blooping” of targets, the 215b (120) would ideally be specialized in long range plinking, weak armor and a poor turret layout and lowish health would balance out the good DPM, Penetration, Accuracy, and Aim-time.

But, what would replace it in the current “heavy” slot? I've got a proposal, but not nearly enough detail.

The FV4202's problem in game is twofold. It is absolutely underwhelming in every bit of it's hard stats. It's gun, armor, speed, camo value and otherwise. There are tanks that do what this vehicle does better at every turn.

For starters, I do not have an understanding of where, exactly, wargaming has figured that the FV4202's speed was governed to 40 km, like the Centurions' was. Perhaps it was an assumption, of course, given the standard British doctrine- but with a 20 hp/tonne ratio, one could imagine that the extra horsepower and lightened weight could have been easily used to increase the speed of the tank anywhere from 45 – 50 kmh. If someone has proof that the 4202's speed had a governer, I'd love to see it, but in my research, it wasn't. In fact, I've failed to find the actual listed top speed of the tank. It seems wargaming may have simply copy-pasted the governor from the Centurion.

The second problem with the 4202 is the gold round. HESH on the 183 is extremely good because it has relatively high penetration numbers and a huge damage pool, neither of which it has on the 4202. Most player reviews and subjective testing has shown that it is simply an ineffective choice, it's poor penetration and unremarkable damage pool makes it a poor choice to use over the standard armour penetration round. This could be easily solved with a buff that might be a bit unhistorical- increasing the armour penetration of the HESH round to 250-270mm would make the round a lot more consistent. A further increase of it's damage to perhaps 500-520 damage would help as well.

Two small changes could easily make the 4202 a wonderful, effective vehicle and maintain its usefulness during clanwars as well as pub-matches without simply slapping a HEAT round on as a gold.