In my little Q&A session I mentioned that a major reason of the cancellation of the T110E5 were other, lighter vehicles that were being designed to fill the role of a Heavy Gun Tank(120 mm armed vehicle). The T96 project was one of the major reasons of the T110E5 cancellation. Today I want to dig a little deeper about the T96. The T96 originates from the TL-4 proposal from the Questionmark III Conference. The T96 was to be armed with a 105 mm smooth-bore weapon and be developed alongside the T95 90 mm gun tank(The T95E2 is to be in WoT AFAIK).

The T96 program was assigned to Ford while the T95 was assigned to Detroit Arsenal but they worked together to make most of the parts interchangeable. Ford proposed two variants of the T96 with more armor from the planned 3.8 inches at 60 degrees. The T96-1 variant had 4.1 inches and the T96-2 had 4.8 inches. However by the end of development the T96 was to have 3.2 inches at 65 degrees. 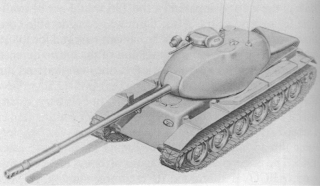 The T96 turret was to be tested at first with the 105 mm smooth-bore on top of the T95 chassis. Soon other weapons such as the 120 mm T123E1 gun and later the lighter-weight T123E6 gun, a modified British 120 mm gun, variants of the smooth-bores, and other exotic weapons were proposed. The success of the more powerful weapons being able to be mounted in the T96 turret meant the T110E5 was redundant.

This shows the T95 mounting the T96 turret with the British 120 mm gun.


Soon testing on the T95 went underway in the late 50s. The need to test the T96 and its turret faded away as new requirements arose  Soon the T96 only survived as being part of the development of the T95 turret. The variations of the T95 with the T96 turret were to be called the T95E4 which mounted a 105 mm smooth-bore, and the T95E6 which was planned to use the T123E6 120 mm gun. Only mock-ups of the T96 turret were built  The T95 project, as a whole, led to the adoption of the M68 105 mm gun which was later the main gun for both the M60 Patton and the original M1 Abrams.


Now you might be thinking how does this relate to WoT? Well the T96 could very well be an alternate tier X  for the American Heavy Branch. The T96-2 mounting the T123E6 would be a very mobile platform and should be CW viable. The T96-2's armor would be ~207 mm effective head on, this number would be increased by manual angling. Don't worry about composite armor, the T96 never had plans for it. The T96 turret would be extremely tough, it should be around ~300 mm of effective armor. The T96 turret was designed to be more protected than the M103 turret, especially against Soviet 100 mm shells. Depression for the gun would be a tasty -9 degrees. Speeds should be around ~50 km/h with good handling characteristics due to the low weight for a heavy tank(46t was the estimated weight  I'd put it closer to 47-48 tons though) and a fairly powerful engine with original requirements stating the need for a ~750 hp engine which wasn't used for the T95.

Personally I think that the T96 concept would be a neat and interesting addition to WoT. I think the balancing of  RoF, OTM accuracy, aim time, ground resistance, and others would play a vital role in making or breaking the T96 in WoT.