- the amount of played arties was reduced by about 40 percent (after the nerf + hardcap)
- when a shell penetrates an armor screen (spaced armor) or tracks, it doesn't change its trajectory
- Ferdinand won't be moved anymore this year (SS: not one tier up, or down, or to a separate branch)
- it's still not yet decided how the German 2nd medium line will look
- Sorted by priority (from most to least): garage battles, turrets flying off, historical battles, multi-turret mechanism
- 0.8.5 will bring a new map
- it's not planned to specifically give the assaulting team light tanks and arty in the assault mode (SS: as in to force them into the assaulting party MM)
- no 4th equipment/consumable slot planned
- VK3601 will me turned into a heavy after the 0.8.4 patch, it's possible its MM weight will be changed
- it's possible that the outstanding parts of the tank (antennas etc.) will cast shadows
- EU tree is too far for the devs to know, what kind of symbol will those tanks carry
- T23 won't be sold (SS: the answer was only "no" - it is actually unclear, what the player is asking about, whether he's asking for it to be sold as a regular vehicle, or as a premium vehicle or at all - thus it's unclear what Storm meant by the answer)
- Leopard 2 prototype will not be introduced (SS: yes, people are actually asking such dumb shit)
- Q: "Why is there no North-Korean flag in WoT?" A: "When the genius of geniuses in military strategy, new star, brilliant comrade Kim Jong Un allows his Korean comrades to play World of Tanks, we will immediately address this issue"
- Fiat 3000 will be implemented, but other mutations of the FT-17 ("Russkij Reno", US M1917) won't, Japanese Tier 1 could be the "Kogata Sensha", but SerB states there is something else already at tier 1 for Japan
- the option for players to enter only battles without platoons won't be implemented
- enabling the option where the tank in sniper mode rocks after shooting has no advantage for the player, "it's just prettier"
- there apparently will be no crew training compensation when VK3601 turns into a heavy, even if it is followed by a medium: "retraining costs the same for every class in gold, so what's the difference"
- various vehicles get various XP for destroying other classes, for example LT's get more XP for destroying arty than other classes
- the Chinese T-34 has more modern suspension than Type 58 (which has the "classical" T-34 suspension) in the game, because the devs have a photo of this particular vehicle having this particular suspension
- SerB states that the British Nuffield TDs having two guns aren't a problem, the second gun will serve as a decoration and the vehicles will have two loaders, even when the multigun mechanism is implemented, those second small guns will remain a decoration, as their impact and penetrating power are negligible (SS: 20mm Polsten)
- system of penetration decals might be upgraded, but not soon
- 310 series of Nvidia drivers have a bug that makes the game crash at the research tree - Storm suggests using 306 series drivers
- this is the picture of the Valentine AT
-
Posted by Unknown at 6:02 PM 32 comments: Links to this post

Apparently, Komarin will return in 0.8.5 Posted by Unknown at 3:07 PM 6 comments: Links to this post

a recent discussion on US forums made me realize, how many fake modeller-made or fan-made designs are out there, confusing the hell out of people. Since World of Tanks is a game at least based on real desings (well, that's a strech, some of the vehicles in game were never more than a drawing sketched on a napkin during those wild Schnapps-und-Frauen evenings), Wargaming won't implement outright fakes - yet people still keep asking for them. Let's have a look at the most blatant ones, that keep popping up over and over again. Please note that since the modellers, artists and other creative people all share some dark fascination with Third Reich, most of the fakes circulating around are German vehicles. There is an insane amount of confusion, regarding the late projects.

Special thanks go to Kankou, Priory_of_Sion and others from the US forums

This image keeps popping over and over again. There are even sites that offer its full "history of development" and try to pass it as a genuine design. I don't blame them, because the tank looks great. However, it's a complete fake. It was made for the computer game "Panzer Front", but for some reason someone somewhere took it seriously and started spreading it around. It might also appear under the name Panther III - two vehicles are generally designated such - one is a strange drawing of a sort, the other is this one. Both are fake.

Another very popular "design", that keeps appearing from time to time. This time it doesn't come from a computer game, but probably from some modeller. Even this vehicle has fake history accounts on the internet, that can confuse people. The main reason it is so popular is because it looks great, however, it was never concieved by German engineers. Sorry. The whole "Jagdpanzer E-100" business was a pretty odd affair anyway - basically it was just a thought design - some guy somewhere had an idea that it would be cool to put a huge gun on the E-100 chassis and make it a superheavy tank destroyer. Nothing more, not even the type of the gun was decided. Mr. Hilary Doyle (a German tanks expert) confirmed this is a fake - the only thing that actually WAS real was a part of the weapons mount, but that didn't even fit the E-100 hull. The Jagdpanzer E-100 currently in the game is a result of what Wargaming thinks it might have looked like - the most realistic one at least. As was again confirmed by Mr. Doyle, the Krokodil wouldn't work for various reasons (the weight distribution, suspension strain... there are many threads about this on WoT forums). Either way - sorry, we won't see the Krokodil in the game. 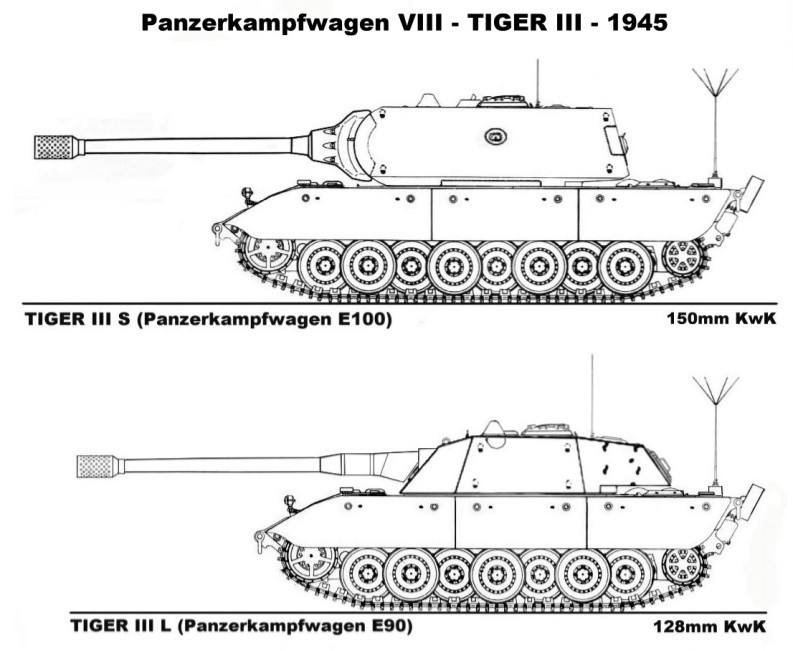 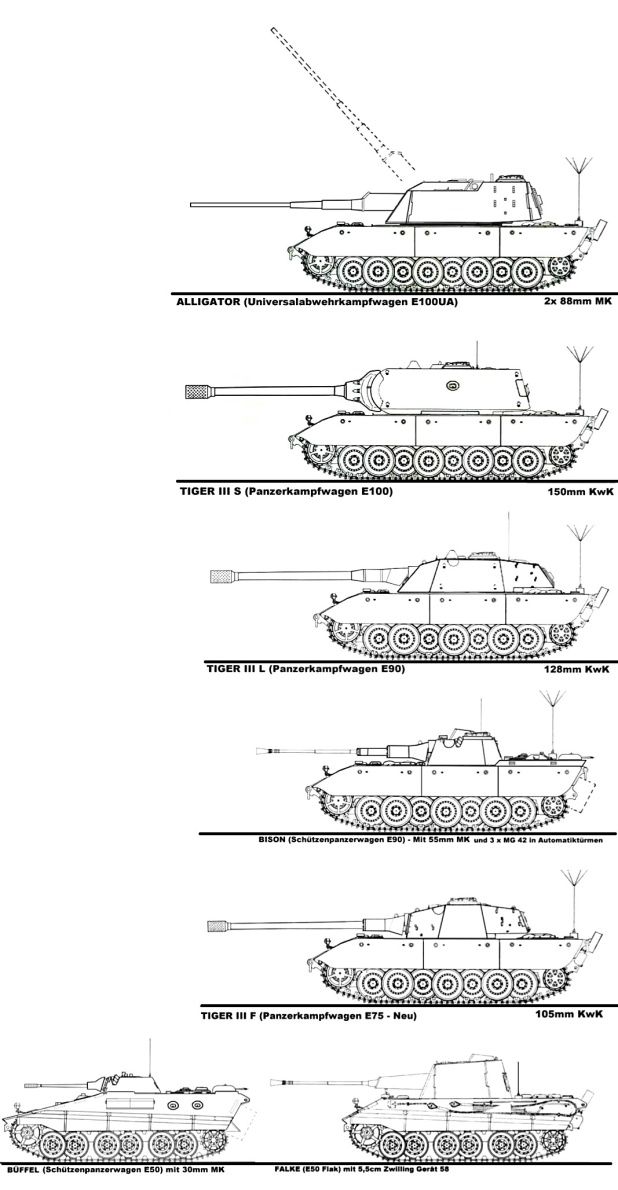 More than any other German vehicle have the superheavy E-100 and Maus hulls inspired a huge number of fake tanks. Notably the E-90 keeps appearing over and over again. Directly behind it are the E-100 hulls with various fake turrets (sorry, I don't have the books on this with me, so I can't give you an exact account). Maus suffers from the same syndrom - for example the Jagdmaus never existed. The Flakpanzer Maus (a Maus hull with a twin-88 turret) is also a complete fake and so is the Alligator (E-100 hull with the same setup). People just love to give the Germans more credit than they really deserve.

Here it gets more complicated really. E-50 existed, at least as a concept (mind you, it was not a "Wunderwaffe" superdesign, the aim of the E series was to streamline and simplify the tank production as much as possible). E-50 Ausf. M however is a Wargaming fabrication. For all intents and purposes it's a fake, but a "realistic" one. At the end of the war, the (civillian) designers started coming up with all sorts of stuff. One of the things they came up with was the powerpack engine concept (in which the engine and the transmission form one block, that can be easily replaced on the field - well, at least more easily than the earlier engines). This would require the turret to be moved to the front and various other modifications. The Germans never did such a thing, this was done by Wargaming with the help of Yuri Pasholok and Hilary Doyle. So, it's a sort of half-fake. It never existed, but it's realistic.

Unlike the last design, this is a complete fake. Not even Spielberger mentions it as far as I know. Someone somewhere thought it would be cool to make a design that would look like the Jagdpanther II and that's how it probably started. As for the StuG E-75, I am not sure, I thought it was a fake, but some people say Spielberger mentions it and I don't have that Panzer Tract book to verify it myself. Jagdpanther III (sometimes designated Jagdpanzer E-79) is also a complete fake. This is a complete fake, but an interesting one. It started as a kitbash by a modeller, who had too many spare parts of the KV-1, KV-2, BT-5 and BM-13 "Katyusha" plastic models. He did put them together and posted it online along with a fictional history. At that point, a great number of websites started taking this info as real, people started to even make fake photos of it (nevermind that the tank on the photo is a photoshopped T-35) and after that, even some popular magazines took the info for granted and wrote articles about it. KV-VI never existed, but it serves as an example of what a few people can do with photoshop, internet and free time. This is probably how most German fakes started too.

Also a fake, but an "official one". In 1945, the Germans printed out a magazine called Signal, containing the silhouettes of completely made-up tanks, designated Panzer IX and Panzer X to mislead the allied intelligence. These tanks never existed, they were never even considered, it was pure propaganda. Nevertheless, after the war a lot of fairytales started springing up about mythical German equipment and the tales of Panzer IX/X were amongst them. Usually most people know it's a fake, but from time to time, someone gets mislead by some of the internet articles and considers it real.

This is a photoshopped image, such a vehicle never existed (this is the original one). It started spreading around the WoT forums and people ask for this vehicle regularily. Sorry, people, this one's a bust. The whole thing is fuelled by a Japanese modelling company even making a model of this vehicle.

There is another version of the "88mm T-34" circulating around the internet:

There is no reliable info on this vehicle and a lot of people (including me) consider it a fake too. There is some vague account on its use by the Germans, but without any proper sources, so yea.

Anyway, I hope you find this useful and don't get misled by fakes! :)
Posted by Unknown at 11:18 AM 39 comments: Links to this post