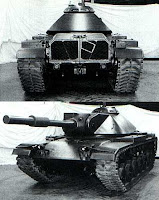 Hello and welcome to "Buff my tank!"

Historically, the VK 30.01(P) was the test bed for many of the innovations that went into many of Dr. Porsche's designs , sharing both their strengths and weaknesses.
Although it never left the prototype stage, it's direct evolution was the Tiger (P) which saw limited production and battle in one example, with most being reconverted in the Ferdinand/Elefant.

In WOT it's seen as a middle ground tank between the VK 36.01 (H) and the other, more agile lines.
In terms of game-play it's indeed pretty average and there have been many buff requests in the past, however let's look at what german engineers imagined for this tank, using "Panzerkampfwagen VI P (Sd.Kfz.181) The history of the Porsche Typ 100 and 101 also known as the Leopard and Tiger" as historical source:

As only one prototype was ever built and its development was superseded by Tiger (P) no plans were ever made to up-armor the VK 30.01 (P).
However, given that its successor was not a radically different tank and itself was up-armored with bolt-on plates, it wouldn't be impossible to imagine the same treatment, possibly with an easy to produce 30 or 50mm add-on plate.

The prototype twin 210 HP engines were sufficient to obtain a top speed of 60 kilometers per hour on optimal terrain, although with very high fuel consumption.
Again, as Tiger (P) mounted basically an uprated version of the 30.01 engines, upgrading to twin 310 HP for a very respectable power to weight ratio of  17/18 HP/ton.

First of all, WOT stock 75mm L/48 cannon is an historical mistake and introduce purely to prolong the grind on the tank and "encourage" the player to use gold for free XP: 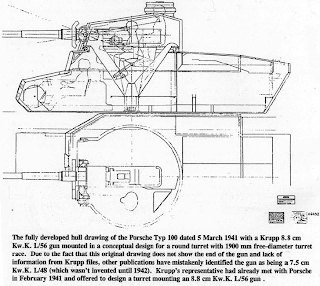 Krupp showed some extremely interesting proposals for the VK 30.01 (P).
The standard issue cannon was supposed to be the 8.8cm K.W.K. L/56 just like Henschel's Tiger, but more options were discussed:

A proposal for a 10.5 cm K.W.K. L/47 was competed on April 10, which would likely have been a redesigned 105mm L/52 for tank use with slightly lower penetration, but the most interesting one was the proposal for an higher velocity version of the 8.8cm K.W.K. L/56 on April 18 using fatter shells.

Both options would have given more than outstanding firepower, especially considering how deadly the FLAK 36 already proved to be on the battlefield but unfortunately both were discarded as one used a non-standard army caliber (not that this stopped Krupp from trying it again later on) and the other would likely have depended on the use of always scarce Tungsten due to the shell shatter effect at such high velocities.

It is also likely that both options would have meant reduced ammo capacity and in case for the 105mm also lower rate of fire, especially if the two piece ammunition was retained.
Mobility would also be adversely affected by an heavier gun, something that made the normally adventurous Dr. Porsche refuse the idea of an 88mm L/71 on Tiger (P) later on.

In WOT terms the tank is fairly balanced, although personally I wouldn't mind a little more agility.
Historically the tank design was rejected because it was too complex to maintain for the battlefield conditions, used precious copper and was seen as generally unreliable, with the electric motors often developing a tendency to overheat, although the VK 30.01 (P) prototype served as an excellent test bed for such an advanced drive train for its time.

Its direct evolution, the VK 45.01 (P) was also marred by the same faults and rejected because of them and thus lost to the more standard Henschel counterpart.
Still, as many other Porsche designs it sprung many innovations and although most of them never reached production stage it is still a monument to tank engineering ingenuity.

All in all, I'd say Balanced for WOT, most upgrades are already in place and the ones missing would be more fitting for one tier higher or a tank destroyer.

Thank you for reading and see you in the next article!