- both the top version of the Soviet IS tank with the 122mm gun (and with the frontal hull armor "divided in the middle" (two parts with different angles) and the one with "streamlined" sloped armor without different angles) are correctly historically designated as "IS-2"
- the hull with the "divided armor" was selected for the tier 7 IS because there was never such a thing as an IS tank with 85mm gun and streamlined armor
- it was considered to divide the IS tank into more vehicles, but then it was denied, as the IS variants aren't very different from each other
- apparently there is a rumor running around that one KV-3 vehicle took part in WW2 fighting. It's not true - KV-220 did, KV-3 didn't.
- it's not yet sure that the T7 German LT "Aufklärungspanzer Panther" will be researched from the VK2801, or what its armament will be
- Q: "SerB, is it possible to introduce the real-life performance IS-7?" A: "You're a newfag :) Such an IS-7 there was already in the alpha test."
- vehicle economy is separated from balancing, occasionally however it has some small influence on it
- Chinese and British arty characteristics? "You'll see"
- the reason for 88mm L/71 and other German guns penetration being different from some German penetration: different methodology of what was considered a penetration and what wasn't, it's based on Russian results with captured guns
- Q: "Why are low tier battles the way they are - everyone penetrates everyone?" A: "Because it's ololololol"
- Q: "Jagdpanther II was removed from the main TD branch, what is its fate?" A: "Its fate is beautiful :)"
- Arty Batchat doesn't have an autoloader because the devs don't have references for it - if someone finds some, they'll add
- only fallen trees count as one for the purpose of additional camo factor, standing trees still counts as multiple cover (multiple bushes)
- there will be no special XP compensation for Jagdpanther II users, the change is not related to the 2nd TD branch if I understand it correctly (SS: sorry, I'm really tired, just correct me if I am wrong)
- SerB thinks the new tutorial will be only for new players, but he's not 100 percent sure
- it's not planned for players to make their own maps
- there will be no free garage slot given out in 8.4 (not as in the AMX ELC case, "because we do not insert new tanks, we only push the existing ones up one tier")
- regarding the Waffenträger 2nd German TD branch: "It's not a Waffenträger branch, it's an open-topped TD branch. It will come in 2013."
- Valentine TD is NOT the Archer. There won't be the Archer in 8.4
- apparently, dynamic vehicle characteristics (in hangar) are being worked on
- Wespe will now be unlockable from Marder, it's not a bug
- although some of the British TD vehicles have multiple guns, multi-gun mechanism was not yet developed, eg. AT-7 will behave much like M3 Lee.
- M26 top turret mantlet thickness is 203mm
- Sexton confirmed as US vehicle
- FV215b and FV4005 Stage 2 are different vehicles (SS: apparently a lot of people mix them up)
- on the new tree, VK3601H is listed as "heavy", but this will actually be done later, not in 8.4
Posted by Unknown at 7:19 PM 29 comments: Links to this post


- one of the reasons Type 62 is not being sold is that it's very similiar to the WZ-131
- SerB states that during peak hours, RU server runs at 78 percent capacity
- apparently it's legal to use Brazillian fascist symbolism ("Nurnberg tribunal didn't find them guilty and they didn't burn any villages here")
- cross-nation designation emblems will not be introduced (SS: for example the US star on German vehicles etc.)
- German crews will not get additional names and surnames in near patches
- winter-time city maps are planned
- using company section for other purposes (chat, platoon seeking) is not punisheable
- Some tier 5 light tanks can be a top vehicle in battles
- On WG implementing software into the client looking for legal mods? "no comment"
- Object 760 won't be implemented
- WG has enough drawing plans now for the Japanese tree (SS: if I understood this correctly)
- one of the Chi Ri variants is planned to have an autoloader (SS: according to Kankou (US forums), it's a belt-fed 75mm gun)
- it's not yet clear whether all the Chi-Ri variants are going to be designated as mediums
- Chi-Ri with torsion bar suspension and cast turret won't make it to tier 10 (SS: possibly it'll be lower tier)
- It's possible that the Chi-Ri with sloped frontal armor will be on tier 8, tier 9 and 10 are most likely to be one of the STA variants and one of the early STB models.
- There is ATM a hole in the Japanese tree between low-tier heavies (Type 91, Type 95) and high-tier tanks, WG is trying to fill it atm.
- Storm: Leopard 1 that will be introduced will be: Tier 9 - Prototype Arbeitsgruppe A, Tier 10 - Leopard 1 - first production series
- Chinese tanks aren't expected to recieve a nerf, they behave normally
- Addition tank filters for the garage are unlikely
- SerB admits its possible not all trees will be symetrical - some nations might have light tanks up to tier 8, while others only up to tier 5
- the devs already have the alternative tier 10 Soviet medium, they won't tell for now
- there is a special account type where free cam is allowed (SS:for videos...)
- when the T-50-2 gets replaced (SS: yes it is confirmed), all the stats will most likely transfer to the tank that is going to replace it
- arties will not be un-nerfed even if the other precautions the devs take (hardcap, Expert medal changes) prove successful

To be continued
Posted by Unknown at 5:04 PM 3 comments: Links to this post

AT stands for "Assault tank" - these are the Nuffield designs, turretless, on the heavy side it seems. You can read about them in detail here. The source of this info is Yuri Pasholok via this site. 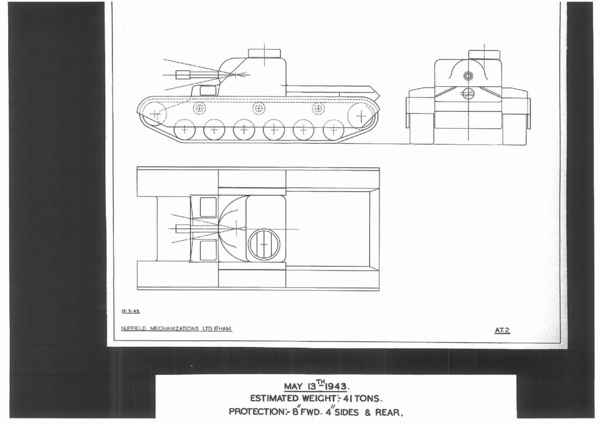 A Nuffield design from 13.5.1943. 41 tons, torsion bar suspension. It was introduced along with the AT-1 design, which had a turret with a 75mm gun or a 95mm howitzer. With AT-2, it was decided an assault tank doesn't need a turret and so it was removed. Both shared the same hull, but AT-2 had a casemate construction, which saved like 4 tons of weight, compared to the AT-1. 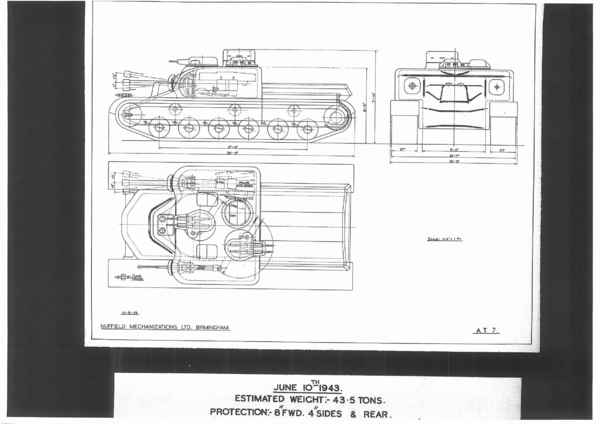 AT-7 is a weird project with a 6 pounder gun as its main armament. Basically, it was a re-worked version of the AT-6 (from May 1943), in which the developers decided to put a 6pdr gun in a sponson mount (and LOTS of machineguns in miniturrets). Later they decided it was a stupid idea anyway and they returned the 6 pounder (SS: in game this will most likely be upgraded, no was a 6pdr can suffice at tier 6) to the casemate construction, but didn't want to waste the perfectly good sponson (*facepalm*) and so they fitted it with a 20mm autocannon. Later (June 1943) the vehicle was reworked by changing the superstructure and the machinegun turrets. The whole thing had 43,5 tons in the end. There was a lighter 41,5 ton version of this project, designated AT-7A. 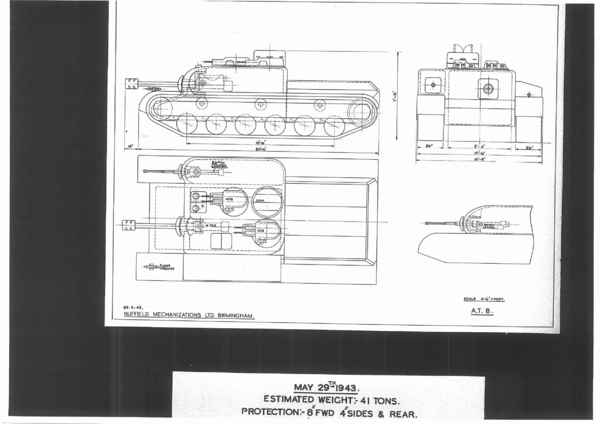 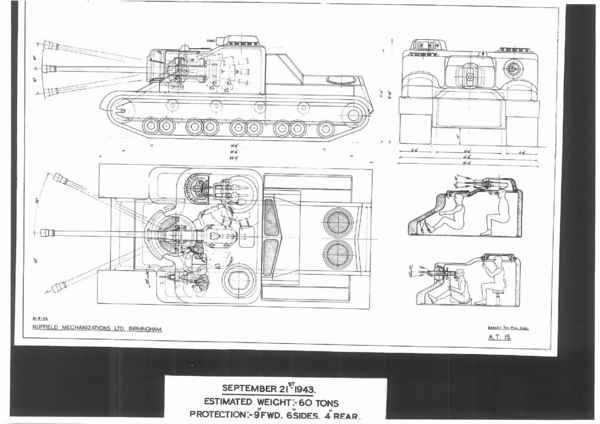 The AT-15 is much like the AT-15A vehicle already in the game, but 5 tons lighter (60 tons). AT-15 comes from 21.9.1943, AT-15A is roughly two weeks newer. It was equipped with a 17pdr gun. It was a result of the army getting pissed at Nuffield, because Nuffield engineers loved to put the gun on the right or left side of the vehicle, but not in the center. The last such an assymetrical vehicle was the AT-14 project, after that it was reworked to mount the gun in the center and re-designated AT-15. The frontal armor is roughly similiar to the AT-15A: 152mm in the front, 101mm on the sides (respectively 6,5 and 4,5 inches)
Posted by Unknown at 1:39 PM 5 comments: Links to this post

In patch 8.4, Panzer I Ausf. C and Panzer II Ausf. G are rumored to appear along with the classic Panzer I. It seems the new branch will look like this:

The history of Panzer I is well known and documented. Let's have a look at the remaining two vehicles: Panzer I Ausf. C has practically nothing to do with the "basic" models - Panzer I Ausf. A and Panzer I Ausf. B (both the chassis and the turret were different). It was a specialist vehicle, developed for the paratrooper units in order to be transported in the Messerschmitt Me-321 planes, based on the army request for a light recoinnesance tank of the 8 ton category. The vehicle itself weighted around 8 tons indeed, had a 30mm frontal armor (both hull and turret) and was powered by a 150hp Maybach HL45P engine, allowing the vehicle to reach up to 80km/h. The armament consisted of an unusual combination: there was a MG-34 machinegun, but there was also a special 7,92mm anti-tank rifle designated EW141. Its caliber is only 7,92mm, but it's a high pressure weapon and thus its penetration will be sufficient (it fires the Panzerbüchse ammunition, which can penetrate around 25mm at 300m, which means it'll probably have around 40mm penetration in game).
It's a rather new project - several were built around 1943 (although Wiki states that the development started as soon as 1939 as a cooperation project between Krauss Maffei and Daimler Benz, with the first prototype built in 1941). Wiki states that 40 of these vehicles were produced and they served along with 6 prototypes (some sources claim only 4 prototypes) and most (38) served on the western front during Normandy landings. Panzer II Ausf. G from 1941 (manufactured until February 1942), also referred to as a VK9.01 (9 ton, 1st project), or Pz.Kpfw. II neuer Art, was an attempt to re-work and improve the Panzer II series in order to prolong their lifespan. It uses a different type of suspension with 5 overlapping roadwheels (in German "Schachtelaufwerk") and eventually led (over the Ausf. J) to the development of the Leopard. Several prototypes were built and subsequently around 12 vehicles were completed. Some sources claim they never saw combat, while other sources (H. Doyle) claim at least one was transferred to the eastern front and apparently used (as it was covered by a camouflage): Panzer II Ausf. G was uparmored when compared to its predecessors and its frontal armor was cca 30mm thick (15mm on the sides). However, when it comes to armament and engine, different sources say different things (even though the performance is roughly equal): it was propelled by a 150hp engine (Maybach HL 45, or Maybach HL66) and armed with a 7,92mm anti-tank rifle, described in the Panzer I Ausf. C part. One development version was also armed with a stabilized 20mm KwK 38 autocannon.
Wiki states that its turrets were later used for fortification.

The first details about the 8.4 are starting to appear.