With the upcoming artillery nerf rebalancing coming, I thought it would be interesting to explore what artillery could do realistically. I have previously looked at how well HE works in real life, and it seems to work pretty well with even small calibers. Large calibers, like 152 mm, work even better.

The thing is, these tests only cover what happens on direct impacts, which, as any artillery player will tell you, are few and far between. Even the Object 261, heralded for its accuracy among the SPGs, has an accuracy of 0.42, which is pretty miserable for a tank, especially when shooting all the way across the map.

That range is where the problem with real life artillery comes in.

This figure from a Soviet artillery textbook demonstrates how inaccurate a gun can be at long range. The 76 mm gun has similar ballistics to the T-34's F-34 gun, which does not miss a StuG-sized target at 950 meters. That's pretty accurate. However, at a range of 3 km, the horizontal dispersion is 8 meters, or 2.66 StuG widths. At 5 km, that distance increases to 20 m, 33.6 m at 8 km, and 30.4 meters at 10 km. At those high ranges, it is also easier to overshoot, especially if you are using a low velocity gun with a high arc.

Since in-game accuracy is much poorer for all guns than real-life accuracy, let's do some conversions. The model 1938 howitzer (M-30) exists in-game on the SU-85. Its accuracy at 100 meters is 0.55 (somehow, the model 1930 howitzer on the SU-26 is slightly more accurate), meaning that shells at 100 meters would fall within a circle that has a radius of 55 cm. At 3000 meters, this circle would be 16.5 meters in radius, or 33 meters in diameter. Compared to the real life circle, 12 meters in diameter, 122 mm artillery is roughly three times less accurate than in real life. . Compared to how badly the D-25T got shafted (5.75 times), the equivalent caliber artillery gun gets off easy.

All right, so indirect fire in real life is inaccurate too. But everyone knows that arty relies on splash! Let's take a look at how well splash works in real life.

As you can see, the 152 mm shell digs out quite a pit with its explosive power. A 420 mm shell (not shown due to scale issues) displaces 250 cubic meters upon impact. Thankfully, there are no artillery pieces with such a massive caliber in this game. Even if a tank is not destroyed by the explosion, it will have a hard time getting out of the pit. 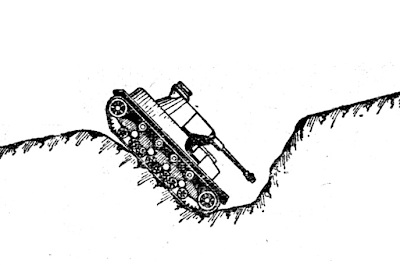 This figure only illustrates how much destruction is caused by the explosive force of the shell. However, artillery shells damage tanks not only with expanding gases, but also with shrapnel. The spread from shrapnel is not in a circle. It flies out more to the sides than front or back. The measurement of a shell's shrapnel effect is a rectangle within which 50% of the targets are struck by shrapnel. The following figure illustrates these areas for some Soviet guns.

Of course, these rounds are designed to destroy infantry and soft vehicles, and we are dealing with tanks here. However, shrapnel can still destroy tracks, optics, and wheels. In game, the damage from an artillery shell should be some mix between damage from the explosion and damage from shrapnel.

The in-splash on the SU-26 122 mm model 1930 howitzer is 2.49 meters. The splash on a stock S-51 152 mm gun is 3.66 meters. Comparing this to the crater sizes, the shrapnel is considered as barely contributing to the destructive effect at all.

And now for the biggest difference: the "satellite view". Obviously, artillery cannot aim like that! However, there are ways to aim at things you cannot see, although you need people correcting your fire.

Before the start of a battle, the battlefield is carefully studied by the battery commander. Forward observer points are established, distances to various landmarks (a house, a lone tree, a fork in the road) are recorded. When a unit radios in for artillery support, the artillery battery aims in at a visible target at the same distance, and then changes the angle to aim at the invisible target.

This is where some math comes in. The forward observer and artillery battery will see the angle of the explosion differently. Using the difference in angles, and some quick trigonometry, it is possible to dial in. Since it would be decades before cheap calculators that could handle trigonometry, you would retrieve your data from a table of pre-calculated values.

This is quite a bit more complicated than "point-and-click", of course. It takes some time, and some shells, to be able to fire accurately at a target you cannot see. The aiming does not need to be as precise as in-game. Instead of only one gun, you are firing with an entire battery.

In-game, your interface is an abstraction of the data that a well-trained crew can provide you. Assuming that the people spotting for you are trained artillery observers, and your map is in good order, an artillery crew should be able to dial in reasonably quickly, especially on maps as small as in-game. Hitting a moving target, however, would still be very difficult. A huge bloom when rotating your tracks is very much realistic.
Posted by Peter at 7:39 PM