Recently, in a new article about the foreign use of the T-62 tank (an interesting subject by itself, by the way) an interesting vehicle was mentioned: the Soviet tank destroyer IT-130 (along with the rather well-known IT-1 rocket tank destroyer), based on the T-62 hull. I did a quick research and here's what I found:

In 1978, a GRU officer Vladimir Rezun, known nowadays under the pseudonym of "Viktor Suvorov", defected with his family to England. Rezun worked as a military analyst. Naturally, he caught the interest of British secret service, whose officers debriefed him. It is not clear whether "Suvorov" was (is) a double agent for the Soviet Union or not, but basically in time it was discovered he made all sorts of shit up, including two tank destroyer designs: the IT-122 and the IT-130.

Now, the name itself is interesting. IT stands for "istrebitel tankov" - "tank destroyer". Wartime and post-war self-propelled guns were generally referred to as "SU" ("samochodnaja ustanovka" - "self-propelled gun"), the "IT" designation was generally obsolete and belonged to some pre-war project (namely for example the IT-45, or "Soviet Hetzer", a small and cheap tank destroyer early war project, scheduled to appear in WoT next year by the way) . Its use for post-war tank destroyer was strange.

It is not known whether the British secret service fell for it or not, but both designs somehow made it to the western literature, including Steven Zaloga's older books (Soviet Assault Guns, 1983). Not much is known on Suvorov's IT-122 project, but in literature, it is often paired with these images:

Seen it before? I thought so, because the vehicle on the images is the SU-122-54, a tank destroyer based on the T-54 from mid 50's, which is already in the game as a tier 9 tank destroyer of the alternative Soviet TD branch. It is my belief (and S.Zaloga's, who later corrected the information) that the SU-122-54 design got somehow mixed into the whole mess, designated IT-122 and made it eventually into various western literature sources. The same opinion is also shared by SerB, who at some point last year stated that the IT-122 is a fake and is in fact a case of mistaken identity of the SU-122-54. Here, a real SU-122-54 picture: 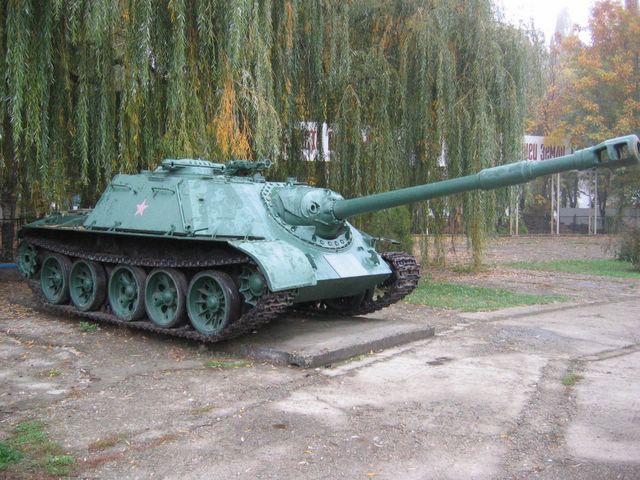 The IT-130 idea came from the same source. In this case, according to Suvorov's info, it is supposed to be a T-62 based tank destroyer from the 60's, equipped with a 130mm cannon, with similiar construction to the "IT-122". The only source of the cannon identity are the sketches from "Suvorov" (the following picture depicts the "IT-122",the The identity of the 130mm gun was not clear either, as at that time, the names of the Soviet guns were not really known. It was reported as "M-46", but who knows...

Either way, both of these tanks (under such designations) never existed. There however WAS a real ISU-130 project. Designated "Object 250", it was an experimental vehicle based on the IS chassis from 1944, built at Factory No.100 under the supervision of the famous Soviet tank designer, J.Kotin and equipped with a naval 130mm gun, designated S-26 (the original name was B-13). It was a basically an ISU-152 with a different gun (the gun was equal in power and penetration to the BL-9). Only one prototype was ever made and tested. This is how it looked:

Posted by SilentstalkerFTR at 10:51 AM