To finish off my other two articles about Postwar American Prototype Lights I will discuss the T71, T92, and the XM551.

Detroit's T71 was an 18 ton vehicle with an oscillating turret and an 76 mm autoloader(same ballistically to the M41's 76 mm gun). With ~340 hp it would be fairly quick. The frontal armor was a pike design similar to the IS-3. 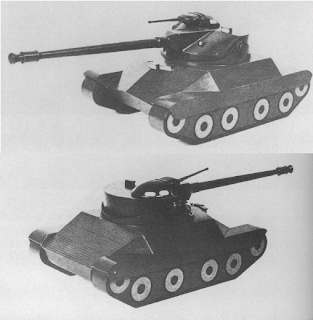 Cadillac's T71 was a conventional style tank without an autoloader. It used the same gun as the Bulldog. It was to weigh a little less than 18 tons and would have the same engine as the other T71. Both T71s lost out to the T92 due to rapid progress in the T92's development. 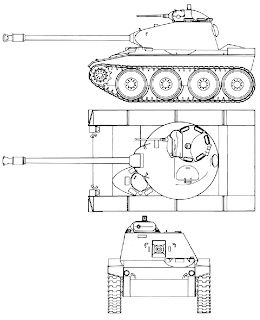 In WoT the hull is from the Cadillac T71 while the turret is from Detroit. If I recall correctly, The_Chieftain has alerted Minsk of their folly. In a future patch expect the T71 turret to be reunited with its hull.

The T92 is a very unique design which emphasized smallness. Weighing a little over 18 tons and armed with the same 76 mm gun the T92 was very close to being put into production which was planned in 1962. The 375 hp engine of the T92 would allow it to be very mobile. The 76 mm gun was located in a cleft turret which allowed for -10 degrees of comfy depression. The T92 was equipped with a semiautomatic loader. This would fire 1 round at a time and did not have any sort of drum. Each round would be put into the semiautomatic loader one at a time. After the round is fire the shell is automatically ejected. Protection is effectively the same as the M41 but lighter weight materials such as aluminum were used to protect parts of the T92. 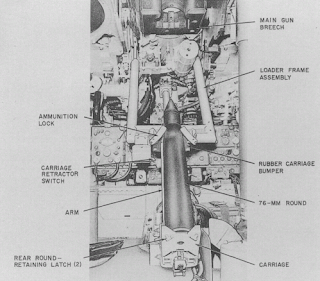 This is the semiautomatic loader. 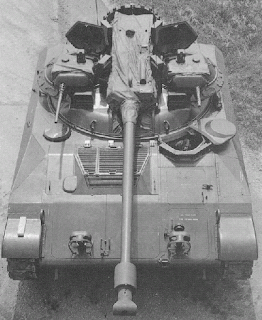 Some people say that UFOs are actually flying T92s from another dimension.

The first T92 arrived at Aberdeen in 1956, the second arrived the next year. Both proved capable machines but there were problems found, in all 50 changes were to take place and ranged from problems with the tracks to problems with the shell case ejector. In 1957, before the 2nd pilot T92 arrived at Aberdeen, Congress found out about Soviet PT-76 and its amphibious capabilities. The T92 was unable be modified to become amphibious due to the design of the vehicle. In 1958 the T92 was cancelled.

The XM551 was to be born out of the ashes of these 1950s prototypes. In 1959 requirements for an Armored Reconnaissance/Airborne Assault Vehicle(AR/AAV) were set, is was to be amphibious, air mobile, to have greater firepower than the M41, and to be quick. AAI and Cadillac presented thier designs. AAI's  12.5 ton AR/AAV featured a 3 man crew with a 152 mm gun-launcher. The armor was very weak and was to go upwards to 65 km/h. 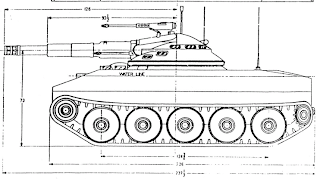 Cadillac's design was heavier and featured 4 crew members which improved the fighting performance of the 152 mm armed vehicle. Armor protection was improved over the AAI vehicle, but was to be aluminum. In June, 1960 the Cadillac AR/AAV was accepted for further development as the XM551. Armament was decided in 1961 to be the 152 gun-launcher which won over the M32 76 mm gun, the M41 90 mm gun, and  105 mm gun(an M68 was mounted eventually in the 1980s actually just so you know). A 285 hp engine was mounted in the XM551 giving it some speed. Testing began at Aberdeen in 1962. These tests proved the XM551 was full of issues. FOUR more "generations" of pilot XM551s were tested until most of the chinks were worked out. You would think that if this thing needed so much modifications that it might not be worth it. By 1965 production of the M551 Sheridan commenced. In combat however the M551 was a failure.

Here is an excerpt for the book The World's Worst Weapons on the M551. 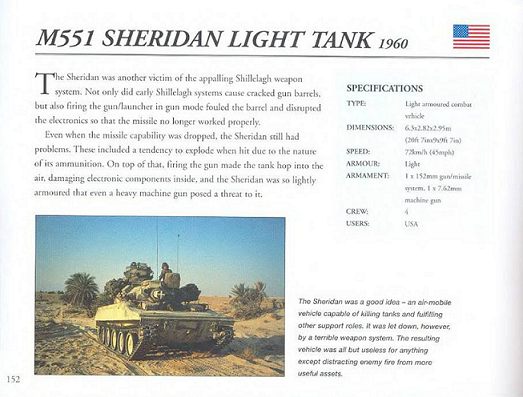 "The resulting vehicle(M551) was all but useless for anything except distracting enemy fire from more useful assets."

By 1970 the Americans started development to replace the Sheridan, the US never did adopt another light tank though. Many projects, some conventional some outright weird, we drawn up and some where extremely close to production. Today the US relies on the Abrams, Bradley, and a plethora of other vehicles to fill the void.

Now in WoT the Detriot Arsenal T71 is already in game and is expected to have the hull changed. The Cadillac T71 would be a great addition to the game being a good tier 7 light material. AFAIK the T92 is on track to become the tier 8 light tank after the M41. I personally would advice WG to reconsider the T92's position. It doesn't offer any great advantage over the M41 in anything, the T92 would be a let down at tier 8. If I was a developer the T92 would be a tier 7, maybe a crossover vehicle between the M41 and T71(DA). The XM551 is tricky. The 152 mm gun-launcher would be limited to only HE and HEAT rounds and guided missiles is a no-go. The armor of the XM551 is extremely weak and is liable to catch on fire every time it is shot.The Sheridan also is less comfortable(only -8 depression compared to the -10 on most other American Lights). Due to these reasons the XM551 should be excluded from WoT IMO.