The article was first of all released in an unfinished form. I am sorry therefore, Silent Stalker released it because I send it to him, however I only wanted to let him see on what I am working on. I didn’t write it down in the email that it shouldn’t be posted in this from so it is my mistake as well.
From now on mistakes like that won’t happen again, I joined the blog as you might read already!

About the article itself: It contains a lot of technical content. I wouldn’t be able to write it without an study of mechanical engineering, especially the mechanical part probably is not easy to understand.
Therefore I recommend reading it twice before trying to understand it for anybody who isn’t familiar with the subject of armor penetration.
I prepared a FAQ based on the confusion of the first article, you can find it in the end of this version. Also I reworked the article to make it easier to understand.

„God damn, I can’t believe that he penetrated me with that penetration at that angle! – that can’t be realistic!”

We all know this kind of situation and most probably know the reason for penetration on such occasions:


But how realistic is the way shell normalization was introduced into the game? Currently the value – ingame - is for both APCR and AP shells between -5° and -4°. What does that mean? The angle of armor is negated by these values, resulting in less effective armor against AP and APCR shells than armor/cos(angle) suggest. Angling your tank at up to 20° barely makes a difference because of this phenomenon.


First of all, we need to consider that ingame AP-shells (armor piercing) been in reality a lot of different kinds of shells. Mostly, these 3 shells were in use: 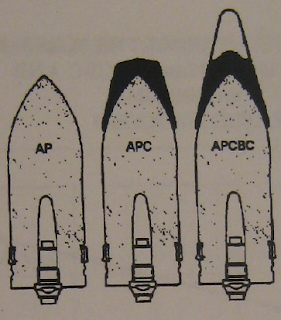 
Most common during the first years of the war, they were used by all nations.


Cap was set on the top of the AP a round to reduce shatter tendency.


Like APC - with an additional cap to reduce wind resistance.

These shells had all compareable normalization values, with AP having slightly worse values than APC and APCBC rounds. In this article all will be treated the same way.


After discussing the 3 most common kinds of shells, we will shoot such a shell against an armor plate and make a mechanical analysis. I prepared it for a AP shell. The following graph might explain the key problem with the penetration of sloped armor. The contact forces are calculated with F=p*A (pressure, and contact-Area, a rounded area all around the shell). This kind of 3 dimensional pressure-contact can mechanically be simplified by summing up the pressure of the lower and the upper part of the shell to 2 resultant forces. This is reflected here [1]: 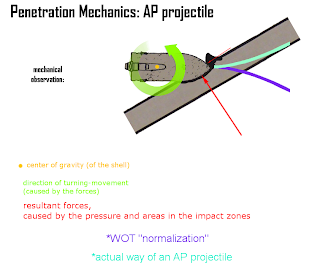 (For all who want to dig even deeper, I prepared the whole mechanical treatment of the shell in the contact zone, something like this is seemingly missing all-over the web. It’s basically the static treatment from above and the dynamic treatment (principle of D’Alembert [1]) – it explains why the shell penetrates armor at all.)

There is no Normalization for AP projectiles which negates armor (the term normalization is misleading mathematically, but to prevent confusion this article will still refer to it). On the basis of “WWII Ballistics - Armor and Gunnery” it is possible to calculate normalization values as we know them. Technically it is uncommon to work with them at all because of the complexity of the shell trajectory. However, these values are fairly good to understand the basics of AP shell penetration and the difference between World of Tanks and Reality.

Probably out of blue for the majority of WOT-players: The reality values are positive. Sloping leads to more effective armor than 1/cos(angle) suggests.  Also new - “normalization” gets higher values with a greater shell diameter (that means more mass per mm²). In other words: Small calibers are worse against sloped armor.  The normalization value increases significantly against higher angles. [2]


Also this kind of sloping explains most battle reports which were not understandable yet. Just to name a few: The IS-2 had problems penetrating the Panthers glacis on distance (with AP), or the 8,8cm L/71 of the Kingtiger was unable to penetrate the 100mm frontalarmor of the postwar T-54. [2]

- (2) Armor angling was a lot more effective than reflected ingame

- (4) The conversion of german penetration-data from 30° to 0° was done with Armor/cos(30°+normalization) as basis, however negative normalization values were put into the formula, which were actually positive values, creating less penetration for 0° data


Now for those whos brain is not broken yet, here is a FAQ which might clear up some unclear things.

(link to WG video, at 4:30)
Probably a really confusing video. The video is good, however the effect they describe was only reflected by a single type of shell in the 2nd World War. The Soviet APBC shell (Armor Piercing Ballistic Capped), I might explain that effect in an article in the future. [2]


You can see it besides the types of shells we know already, it is on the right side. You can recognize it on the blunt nose (behind the white Ballistic Bap) which is also in the video. [2] 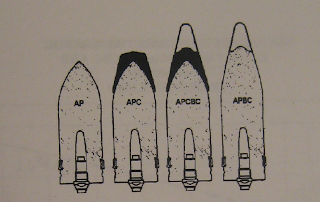 2: Wikipedia says, that the length of the projectile is also very important when it comes to normalization..

That is correct. Follow the digging even deeper link, it shows where this effect comes from. This is a really complex feature but I will explain it. You will see the moment of inertia in the link, the blue circle around the center of gravity. This moment works against the moment created by the forces which turn the shell and make the shell ricochet. The moment of inertia increases with shell lengh, thus makes it harder for the contact forces to turn the shell, which results in less normalization.


3: You are saying there is a big mistake? Why you are not making suggestion on eu forums about it?
Yes there is quite a big mistake. I might do that one day, but realistic shells and slope effects would require massive rebalancing.

4: My IS-3 sure would appreciate that...
Absolutly, the frontarmor of a real IS-3 was incredible strong against most WW2 projectiles.
Also, WOT is somehow unabled to reflect 3D sloped plates armor ingame. (angleing it does take into account however)
IS-3 front works like 110mm @56° which is currently 175mm ingame.
Same for is-7, 150mm @65° which is 300mm frorm the front (tested)

source is www.wotarmory.com for the IS-7.

Might write an article about actual performance of Pike-Nose armor one day..

5: there is nothing wrong in converting data, WG simply used Soviet criteria (Which was most strict then German, US and UK) for most guns.
Soviet criteria is less strict than the german one [2]. German criteria is 5 successfull penetration is a row and not 50% success.
According to [2] you have to multiply soviet test results by 1,06 and german by 1,14 in order to receive 50% success data. To estimate german combat ammo results you have to multiple the data by 0,943 [2] (for example for a 88mm shell) in order to estimate combat ammo penetration.

Article about how to estimate german 0° penetration at 50% success will follow.
(doubt the 1,14, but the book has great sources, will see what i will do regarding the article)


6:  F=p*A equation, it is quite useless, since you do not know the pressure involved..
Here lays another engineering aspect. Over the extent of the shell the pressure is pretty constant, with the one on the lower possibly being higher than the on the higher side because of more plastic deformation and solidification.


7: Soviet guns penetrated more IRL as well..
I said nowhere that they didnt. But the subject is normalization and thus sloped armor and the error WG made specially at this point in armor conversion was my last point of the conclusion.

If you compare german to soviet penetration ingame the difference to RL data is not that huge (only talking about the differences) but compared to any other nations data (which used AP based projectiles) the german data is really damn wrong.

Germans get ~30° data, to compensate that they get APBC normalization. On the other hand
US data for example is 50% success data (at a softer plate), ingame they get APBC like normalisation for their full penetration at 0° (for many guns).

Some penetration data where nerfed and buffed others were just buffed. That would be okay regarding balance. But they say also that its technically correct what they do, and that is very very wrong.

Anyways, soviet data is also worth an article..

8:How can they have same normalization when the latter ones are developed FROM the former AP shell IN ORDER TO IMPROVE normalization?

APC and APCBC were NOT developed to improve normalization.

APCBC - like APC, with a cap which let penetration drop less on distance [2]

9:I have just put my hands on a library copy of "WWII Ballistics: Armor and Gunnery". Could you, please, post a short comment on how you calculated the "real" normalization angles.

First of all we need to be aware of the fact, that normalization values are something to simplify the process of penetration and give an idea about how the angle of the armor changed the shell directory. 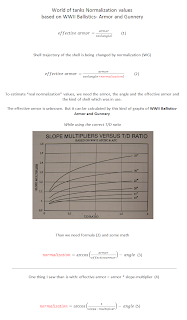 Posted by Thor_Hammerschlag at 10:03 PM