Continuing my Q&A feature, here is the #3 batch of questions!

Q: Can you list all the proposed KV-4 blueprints, their implementations in-game, their actual speed, and armour schematics? What tiers can they be implemented in?
A: I don't have all of them, but I do have some. Data on the designs is a little sparse. For some, not even their creator is known. There are twenty of these things, so I'll cover the interesting ones.

In game, Fedorenko's design would be roughly the same, except with a bigger weak spot where the 45 mm turret is. It is hard to talk about viability of the design in-game, as armour layouts are unknown.

This tank has a bit more data on it. Also similar to the current KV-4, with a bit less gun depression due to the center turret. The armour and weight are about the same as the current in-game KV-4. The speed is a little higher.

This KV-4 is a little faster and shorter than the one in game. The designer apparently hated gun depression with a passion, as none is found here.

Shashmurin's design takes an M3 Lee-like approach: big gun in the hull, small gun in the turret. This thing had little advantages over any of the other designs.

This is another TD-like project. The armour is reduced to 125 mm. Maybe this can be a tier 7, if it doesn't get the huge gun.

Mihailov's project combines speed with firepower. The useless 45 mm gun is removed, along with its weak spot. The tank itself is lighter than the one in the game, at 86.5 tons. This isn't even the fastest project, Sychev's KV-4 would go 55 kph (sadly, no blueprint is provided).

As you can see, all KV-4s are roughly the same. Some of the weaker armoured ones might do well at tier 7, but there is not very much spread.

Q: Is the current 107 mm top gun on the KV-4 close to reality?
A: Let's take a look at Soviet 107 mm guns. The top gun is the "107 mm high power gun". It gets a pretty impressive 188 mm of penetration at 1000 meters, against armour sloped at 30 degrees. Since WoT measures penetration against flat armour at 100 meters, I'm going to have to do some approximations.

Q: Are there Russian tanks similar to the Sturmtiger? I have read about the RBT-5 and a KV variant with Katyusha rockets.
A: There were self propelled T-34 mortar projects, both less than and greater than the Sturmtiger caliber. There was also a 400 mm mortar project for the T-34 and KV-1S, but they didn't have the armoured casemate of the Sturmtiger. A project existed to mount the BM-13 rockets on a KV-1, but it never went anywhere. 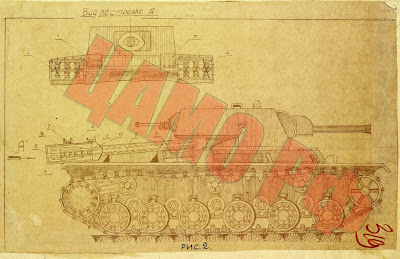 As for the RBT-5, it was an interesting tank indeed. While keeping its 45 mm gun, it was equipped with two 250 kg "tank torpedoes", capable of the same destructive power as 305 mm guns, capable of taking out enemy heavy tanks and concrete bunkers. The rockets were aimed with the standard gun sight. The 45 mm gun was used to acquire the range, and then the rockets would be fired after converting it using a table. The range of these rockets was up to 1500 meters. However, the rockets were vulnerable to bullets, shells, and shrapnel, so the project was axed. 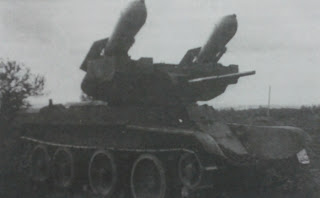 Another rocket BT project was developed, a BT-5 with 132 mm rockets. Rather than being produced for some combat purpose, it was produced to determine the effect of rocket exhaust on the tank and its crew. Turns out that it was harmless, but was unacceptable in terms of fire safety. The project was discontinued, but the data gathered was used in the Katyusha program. 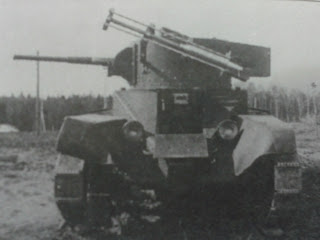 As for direct equivalents of the Sturmtiger, I don't know of any. The largest caliber the Soviets put in a tank expected to participate in close combat was 203 mm.

Q: I heard about the successor of the T-39, the T-42, and I was wondering if there is any info about it.
A: The T-42 was not a successor, but a predecessor to the T-39 (the T indexes are not sequential). The story of the T-42 begins in 1930, when the USSR invited foreign specialists to consult with on tank building. One of these specialists was German engineer Eduard Grote. The, as SerB puts it, "gloomy Teutonic genius" seems to be set on ridiculously heavy tanks, as Grote proposed a 1000 ton tank in 1931 with either three or six turrets, two 304 mm guns, four 152 mm and 76 mm guns, and two 45 mm guns, with a crew of 40 people. This proposal was denied. Grote proposed a slightly more reasonable tank, only 75 tons. There were only three guns, two 45 mm, and one 76 or 100 mm. The tank crew was 10 people. Based on this project, he also designed a heavier tank, the T-42. The tank's mass was 100 tons, armour up to 70 mm. The main gun, 107 mm in caliber, would be placed in a center turret, that could rotate 270 degrees. A 76 mm gun was placed in the front turret, which could rotate 202 degrees. A 45 mm gun was placed in the rear turret, which could rotate 278 degrees. The tank was planned to be accelerated to 30 kph with a 2000 hp engine. It could also cross up to 2 m deep rivers with a watertight hull and turrets.

As of fall of 1931, it was decided that Grote's services are no longer required.

That's it for now! Keep sending those questions in to tankarchives@gmail.com, or post them in the comments.