- the Chinese Type 100 tank destroyer is nothing else but a Soviet SU-100, license-manufactured (or perhaps only imported to) in China
- some time ago, the game mechanics allowed the engine to burn after any hit (regardless how small), it was changed (a threshold for needed damage per hit was added) because lowtier vehicles burned too much after being hit by rapidfire autocannons
- the Maus speed was set "according to the data coming from its developers"


Storm confirmed this is completely correct - a player called Crueldwarf explains how the mantlet works: 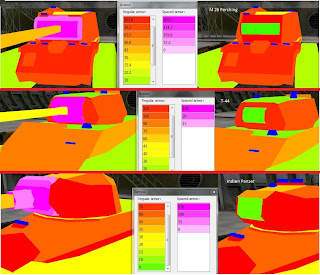 This post was related to the tier 8 medium tank mantlets (specifically Indienpanzer mantlet thickness whine). Basically, all tanks have "empty space" (a zone with very thin armor) behind their mantlet, as demonstrated by the picture above. The difference is, Pershing has much thicker mantlet than other tier 8 meds and T-44 has only a small "empty" space behind the mantlet.

The T-44 (both turrets) has only a 120mm thick mantlet, but the "hole" behind it is relatively small. Only the center of the mantlet is completely penetrable. The rims that overlap with the turret armor make the armor effectively 240mm thick - and that is difficult to break.

The Indienpanzer has a 130mm thick mantlet (in the center), but the hole behind it is very large. Additionally, the mantlet rims are only 100mm (inner rim) and 55mm (outer rim, as shown on the picture) thick. The huge "hole" is the price to pay for very good elevation and depression. In effect, only a very small part of the mantlet is cca 170mm thick, the rest (notably the center) is 120-130mm thick. Generally, the mantlet of the Indienpanzer is very thin for its size.
Posted by SilentstalkerFTR at 5:47 PM