today we are going to look at the upcoming Marder III tier 4 vehicle. Simple enough you say? Well... we'll see :) 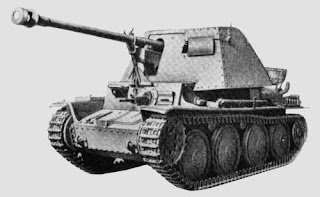 First, a small history trip. I won't put here the detailed history of the Marder series, because it's well documented and even the wikipedia suffices for the basic idea. It's enough to say that the Marder vehicles were concieved as a cheap way to move PaK36(r) or PaK40 around withot having to tow it by horses, with some minor protection added as a bonus. It was a generally successful design line despite its obvious flaws. Basically it can be said that Marder I vehicles were based on captured French tanks, Marder II on Panzer II hulls and Marder III's on various types of the 38t chassis.

Marder I consisted of 3 basic variants: one was the conversion of the Lorraine tractor - this is the best known one, another was the conversion of the FCM 36 tank (that one is already in the game) and yet another was the Hotchkiss H39 conversion. They all carried the Pak 40 L/46 variant. Over a hundred vehicles were converted like this and some of them served until the end of the war. Marder I (39H) is depicted here: Marder II also has its roots in Russia invasion and the need to get as many anti-tank guns to the frontline as possible. Self-propelled AT guns had one more "charm" too: in later years of war, it happened more than once that towed or even manpack AT guns had to be left behind, simply because no tractors or horses were available.This was especially a problem for very heavy AT guns, such as the PaK 43. Self-propelled AT guns such as the Marder series could simply drive away.


Marder II is already in the game, so there is no point in writing about it (the info about it is available anywhere, including wiki), BUT it wasn't the only Marder II. A perhaps lesser known, yet equally as important vehicle, designated Marder II (SdKfz 132) existed before the Marder II we know from World of Tanks. This is how it looked: The ingame Marder II (SdKfz 131) was armed with a PaK 40 straight from the start and was built on the Panzer II Ausf.F/G chassis, while the SdKfz 132 was built on the earlier chassis (Ausf.D) and was armed with a captured Soviet 76,2mm gun (original Soviet designation: F-22). The earlier Marder II was shorter, but cca 1 ton heavier and also taller (earlier Marder II: 2,6m tall, later Marder II: 2,2m). It is worth noting that the later Marder was only ever equipped with the 75mm PaK 40, never with the Soviet 76,2mm, so the combination we have in game is not historical.
The earlier Marder II was faster too - 55km/h with the same engine as the later variant, but it also had one extra crewmember.

But now we will get to the vehicle this article is focused on, the Marder III.

When you say Marder III, most people will imagine two basic models: Ausf.H (as depicted on the first picture of this post) and Ausf.M with rear superstructure, that looks like this: However, just like with the Marder II, neither of both is in fact the first incarnation of Marder III. The first Marder III has its roots - yet again - in the German invasion of Soviet Union. Just like with the early Marder II, it was equipped with the Soviet 76,2mm gun and was generally known as Panzerjäger 38(t) (do not mistake this for Jagdpanzer 38t, which is the "Hetzer") and it was based on the 38t Ausf.G chassis (in fact, all Marder III's were known as Panzerjäger 38(t), but the name is mostly used for this first one, with the latter types being mostly referred to simply as Marder III). It was a bit taller than the later Ausf.H but (like both the other variants) was propelled by the 150hp Praga engine. It carried the same armor as Ausf.H (50mm in the front, 15mm on the sides of both hull and superstructure). Around 344 were made between April 1942 and October 1942 (this number includes the 84 refits of obsolete Panzer 38t's between November 1942 and November 1943). This is how it looked. By now, it is practically clear that the vehicle included as Marder III into the game will be the Ausführung H however. It was a later variant, produced in huge numbers (around 1100 pieces) from November 1942 to September 1943. What can we expect from this vehicle in game?

Well, for starters, for the same weight (10,8 tons), it was equipped with more powerful engine (150/160hp Praga AC). Ingame Marder II also has a 160hp engine, so in stock configuration (Marder III's gun was the 75mm PaK 40) the vehicles will most likely perform equally. The frontal armor is a bit thicker (50mm compared to Marder II's 30mm), but at tier 4 it doesn't make that big of a difference, as T5-T6 vehicles will penetrate it with ease. Historically, Marder III Ausf.H carried a crew of 4 (compared to the 3 of the Marder II) - whether that's an advantage or not for World of Tanks is disputable.The vehicle is taller (2,5m compared to 2,2m of Marder II), so we can expect a bit worse camo factor.

What is the main reason I consider Ausf.H pretty much a done choice? Well, obviously apart from the leaked icons that hinted at Ausf.H - two things: first - in 1942, a prototype Ausf.H was made carrying the 76,2mm gun, making it the only Marder III model to historically carry both 76,2mm F-22 and the 75mm PaK. Second reason is even more interesting. There was a project to refit the Marder III with the 75mm PaK42 L/70. No prototype was ever built, the project ended on paper.

A lightweight vehicle with a very accurate and high-pen gun (the L/70) could fit tier 4 perfectly. Compared to the contemporary Hetzer, Marder III would be far worse protected and it would lack 105mm derp, making the "sniper" L/70 quite fitting. The weapon is heavier though, with it (in case the current ingame weights are kept), the weight of the vehicle would rise by 220kg to rougly 11 tons).

The second major variant (Ausf.M) had its superstructure shifted to the back and the engine to the middle. One of the main reasons for this is better engine access (resulting in less maintenance time) and easier and faster production (the model was simplified). It also carried one less crewmember. It carried the PaK 40 and from April 1943 to May 1944, around 975 were made and they served until the end of the war. Its inclusion (despite being the latest Marder III model) is unlikely, mostly because of the limited weapons options (it never carried the 76,2mm) and because of extremely thin armor (20mm instead of the 50mm of Ausf H).

Apart from the mentioned 76,2mm Ausf.H prototype, another vehicle was proposed: the mid-casemate Marder III with 75mm StuK 40, designated Sturmgeschütz 38(t). A prototype was made:

It is not clear whether this project has anything to do with the Marder III development, or it came to be separately. Some sources (I.Pejčoch) claim to former while others claim the latter and some sources (Doyle) claim the name Sturmgeschütz 38t was used for something else entirely (namely an assault gun based on the Hetzer).

Yet another variant was proposed (for training) - it was a regular Marder III, powered by a woodgas generator. Not very safe for combat.

What is not a Marder

Occassionally in various internet quizzes and "what's this" threads, several pictures pop up and various posters claim them to be Marders or even some new Marder prototypes. I have seen random claims saying that Marder I vehicles were at first equipped with 50mm L/60 PaK's. They were not. One picture exists but it's just a field conversion. This picture was taken in France and it shows a converted Marder I vehicle belonging to the French resistance. Whether this modification was done by the Germans or the French is not known. Another picture that sometimes pops up is the "50mm Marder II" - but everyone can see the superstructure is different.

It's not really a Marder II, it's a field conversion of an original Panzer II with a Marder-inspired casemate structure attached. This vehicle belonged to the PanzerjägerAbteilung 128 of 23rd Panzer Division, the photo was taken in Summer 1943. This vehicle was led as active from 6/43 to 11/43.

A third special vehicle that is not a Marder is located on this picture, right behind the two tank wrecks. Despite the casemate, it's in fact a Grille, refitted with a 75mm PaK 40. Probably one-time field conversion. And - last but not least - there was a Marder-ish proposal for a tank destroyer based on everyone's favourite scout, Panzer 38t n.A. Not much is known about it apart from the fact the engine was moved to the middle, so it probably resembled the Marder Ausf.M. No prototype was ever built.
Posted by SilentstalkerFTR at 1:13 PM