On the developer blog, Storm asked the Russian players, how they like the 0.8.6 test. Here's an excerpt from Storm's comments under the article.

- apparently, the new dynamic camera works like it should, players were complaining about it getting "stuck" behind object, players complain about it a lot (SS: funny, I didn't have any such problems - do any of you?)
- dynamic camera  moving after each shot is being discussed within WG, apparently it's an atmospheric decision
- combat tasks within the game will come, but later (whatever that is)
- LeFH French premium arty will possibly be removed from the shop
- when HEAT ricochets and hits something else after the ricochet, it will penetrate as usual
- Storm states that KV-5 will be especially tough in 0.8.6
- apparently, the idea of tank spotting being tied to how many spotting points are visible won't happen - it would complicate already hard-to-understand mechanics even further
- the graphic bug where something caused violet rectangles to appear will be fixed in next test round: 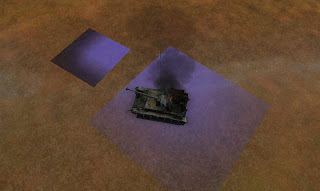 Well, that's it. There are like 700 player comments at this moment and most of them consist of some serious whining - Storm doesn't answer on those.

Just a thought: I don't blame Storm and SerB trolling and being rude anymore. Look what some Russian players are writing to them (and this is by far not the only rude comment): 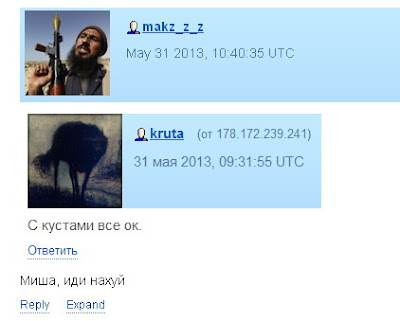 Translation: Misha, go fuck yourself
Posted by SilentstalkerFTR at 9:45 PM