Only 2 and a half month after receiving the order Professor Porsche prepared the first design drawing on June 4, 1942. It had the number K 3381 and was done by Ing. Leopold Schmid. The designation from Porsche for the project was “Porsche Typ 205”. The drawing showed a streamlined tank with up to 120mm armor and 120 tons weight. [1] 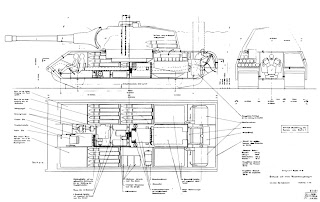 The turret’s weight alone was 23 tons, carrying a massive 15cm KwK L/40 – with some modifications done to the ammunition. The weight of the projectile was decreased from 43kg to 34kg to increase ROF to 4-5 rounds per minute and the muzzle velocity to 845 m/s. As an alternative, a 12,8cm L/50 with a muzzle velocity of 810 m/s was also considered during the development of the tank. [2]

The powerhouse was driven by an air-cooled 16-cylinder diesel engine, with a comparable propulsion system to that of the Tiger (P) – every track was boosted by a single electrical engine. The ground pressure of the vehicle was 0,92 kg/cm². There was also a shortened variant of the blueprint of drawing number K 8331 [1]. This one however hasn’t been discovered yet.

This is what we currently know about the earliest of the Maus’ prototypes.

Further values I can read out of the book [1] (without guarantee, the drawings are still too small to read most of the values) - just to give a rough idea of the vehicles armor values. Armor values are based on interpolation, and the assumption that the confirmed 120mm [1] are on the front of the hull.

Turretarmor:
120/120/80
The turret front is just as the Löwe’s covered by a huge gun mantlet. The turret sides are very thick possibly even ticker than the frontalarmor.

This might also explain the weight of 120 t, the armor is all round pretty good and not much thinner than on the front. The size of the vehicle is comparable to the E100, just a lower profile and maybe a bit shorter. [1]
However it’s still quite a bit smaller than the tremendous Maus.

Is there a spot for it in World of Tanks?

Definitely. Zarax already placed it in his reworked Porsche techtree at T8, which seemingly is a good spot for it. The armor is fine at T8, with relatively thick sides it would be quite tough for mediums but heavys of the same tier would have little trouble penetrating it from the front. During the development of the Maus many engines were considered, there is probably one which fits a 120t tank at T8 very well. As speed limit I would suggest 25 km/h.
Also, it offers a good variety of guns. The 8,8cm KwK 43 L/71  is a decent stock gun, upgradeable to both a 10,5cm KwK L/70 (current Löwe gun) or as an alternative the 12,8 cm L/50. (both historically verified, [2])

Posted by Thor_Hammerschlag at 10:03 PM