those of you, who are interested in French projects most likely know about this vehicle, but let me introduce this beauty to the rest of the good folks reading this blog.

This is the Somua SM project. Works on it begin at the Société d'outillage mécanique et d'usinage d'artillerie (SOMUA) design bureau in 1946, during that time France desperately sought to regain international prestige by (amongst other ways) restarting its tank-producing industry. As you can see on the hull, experience learned from the German vehicles has been used in its design (the sloped armor reminds us of the Tiger II, by which it was heavily inspired). A 100mm gun, installed in an oscillating turret (which was apparently identical to the one of the AMX-50) has been chosen as the armament.

First prototype was finished in October 1951 and trials lasted until mid 1953, but by then politics intervened and it was decided to buy the American (and cheap) M47 Pattons instead. Not much else is known about this vehicle, including the exact armor thicknesses or weight (it is estimated it will be the same weight category as the AMX 50). In game however it could be a rather interesting vehicle. In fact, we can be reasonably sure it will be implemented at some point, because a long time ago (mid 2012), it appeared in the French tree (before the whole "future tree" concept was scrapped) as a tier 7 heavy tank: 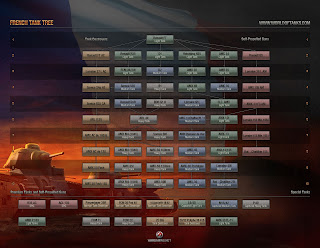