In December 1942, the Technical committee of the Main Artillery Command of the Red Army developed technical/tactical requirements for a self-propelled artillery gun, equipped with a twin-linked pair of 122mm M-30 howitzers. These requirements then went to the OKB-172 factory, based in Perm, where by the end of April 1943, a project for the twin-barrelled SPG based on T-34 was developed. It recieved a factory designation of SU-2-122. 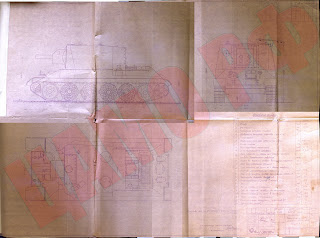 Just like with the KV-7, the main point of the idea was the possibility to fire in salvos. In order to implement this idea, a price had to be paid: the T-34 hull was prolonged by one roadwheel and the weight was increased to 35 tons. After considering advantages and disadvantages, the aforementioned committee decided to scrap the SU-2-122 project, not even a prototype was built.
Posted by Unknown at 10:45 AM