Disclaimer:
This is a purely speculative article that takes into account WOT german tech tree and uses historical tanks to speculate possible new tank additions.
While trying to keep the articles faithful to history some room for inaccuracy is allowed within these rules:

1) No tank or tank part will be 100% made up, at least a mention about tank role and vague specs are needed

2) Components not planned for the tank are allowed, provided it wouldn't create grotesque inaccuracies like putting a gun that would obviously cripple a tank under its weight

3) This will be limited to WWII plans, anything post war risks to be too arbitrary to properly balance

No serious expectation of anything listed to appear in WOT as described is applied, but as we're discussing about implementing history into an arcade game some items will be controversial.
This is unavoidable as WOT tech tree rules need a tank to be better than the previous one and ergonomics are not exactly cared about, meaning that most designs are over-performing their real counterparts.


Although Porsche is best known for the Ferdinand and the Maus, he worked on a plethora of lesser known designs, although most of them never left the paper stage.
Starting from 1943 and as the war material situation worsened he focused on lighter designs, some of which were tank destroyers.

Due to a lack of early designs, this tree will start from tier V, in my mind branching from either the Hetzer or the Panzer 38 Neuer Art:

Based on the Porsche Typ 245 light tank design, this light assault gun was meant to double up as recon tank and use belt-fed weapons, eliminating the need for a loader.
Designed to be fairly well armored (60mm sloped frontal armor), it was planned to be fast with a 250HP air-cooled  Porsche engine, which pushed its 15 tons at a top speed of 58 kilometers per hour, granting a pretty good 16HP/ton.

At around 1.5 meters of height and being shorter than the Hetzer, it was pretty short and hard to detect, making it a potentially great ambush tank.
Its planned armament was a 55mm Rheinmetall M112 autocannon with a traverse of 5° on each side, coupled with a light MG in the cupola.

We could estimate as upgrades that the tank could receive a Porsche Typ 100 engine variant, and keep relatively light armament.
I initially thought about 55mm Gerat 58 but it would look ridicolous on the tank, as well as its early relative 5cm Flak 41.
Considering larger guns, the 75mm L/48 would look quite big on the tank already, so it's likely we'll have to be limited to howitzers and short guns.

An autoloading variant of the 5cm L/60 cannon could be used with a 5 round drum, although lackluster penetration would not improve the situation by much.
105mm L/28 would match the tank pretty well, but it will likely mean giving up most traverse.


Stretching up a bit more, one could consider the 8cm PAW 600, which would give slightly better HE damage than a 75mm gun, however gold ammo is limited to 140ishmm HEAT penetration.
Alternatively, the 30mm MK103 or an autoloading 37mm with the uranium rounds could be considered, but this is borderline with history.

All in all, an excellent "flanking TD" useful for hunting scout tanks and protecting artillery but not exactly a pleasant grind.

Possibly one of the first drafts of the Porsche Typ 250, the Porsche Kleiner Panzerkampfwagen was an interesting project, based on the use of cast armor to speed up building.
Another relatively compact design, it was supposed to be 2.2m tall in it's largest version, 6.75 meters long and 3.15 meters wide.

Fairly well protected by an 80mm sloped front, it sported a 345HP Porsche V-10 engine pushing 25-26 tons, making it a still relatively agile vehicle at 13HP/ton, while crew was now composed by 4 members.
Its initial armament was supposed to be the 105mm L/28, with a 30mm autocannon as secondary weapon.
Top speed is not given but one could estimate around 45-50kmh on ideal terrain.

During its development upgrading the cannon was considered.
Sources are slightly sketchy on this though, as they state a 10.5cm PAW firing fin-stabilized ammo at 900m/s was planned.

Now, this leaves us in a bit of a conundrum:

While there was a 10.5 PAW firing fin-stabilized ammo (called 10H64, it reached prototype stage), it was rather a low velocity gun-howitzer meant to fire HE and HEAT than a long gun.
On the other side, the only gun in the german arsenal that could match the performance specs (105mm and 900m/s) would be the 105mm L/68 proposed for the Tiger II, which in its rifled version was estimated to reach around 860 m/s, but on the tank with a front mount it would make the tank almost twice as long, not to mention making it nose heavy and unmaneuverable in city or wooded terrain.

This leads me to two hypothesis:

1) The 10H64 was meant for a front mount, while the long 105 for a rear casemate. It could fit with some difficulty but there are no designs to support this.

2) Speculating on a wrong translation and given the british authors, it is more likely 900 feet per second were meant, a performance quite close to the 10H64 cannon.

Personally, I think the latter option is more likely, but given that in WOT smoothbore guns are not a welcome option (although in this case it would be a "derp gun") we could speculate the tank would mount yet another design as top gun, the 105mm L/47.
Rougly as long as the 88mm L/56, it was designed by Porsche to fit the VK 3001 (P)/Tiger (P) turret and we could estimate a similar performance as the russian 107mm or french 105mm of tiers V-VI.

As for mobility, it is likely the V-10 engine would be later replaced by a 500HP V-12 that was in development, granting it nearly 20HP/ton, pushing the top speed to over 50kmh.

Sometimes confused with the E-25, this 1944 design was the ultimate "light" tank destroyer by Porsche.
Roughly the same size as its tier VI predecessor, it was designed to sport 120mm frontal armor, 4 man crew and a semi-automatic (mentioned as "belt-fed", likely an auto-loader) cannon plus a 30mm MK 103/108 in the small turret above.

A 500HP V-12 engine was supposed to push its 27 tons of weight to a top speed of 57 kilometers per hour, which at around 18HP/ton would have made the vehicle quite agile, although it's likely the weight was under estimated.

Weapon-wise, Spielberger states that the 105mm L/28 was originally planned, but later to be replaced with a semi-automatic 10.5cm cannon of higher performance.
In this case, one could assume we'd end up with a similar armament as the WOT Jagdpanther, although given the better chassis specs gun would inferior in performance, with in my opinion a final choice between a drum loaded version of the howitzer and the 88mm L/71 or 105mm L/47 if the 10H64 is not picked.

Engine-wise, we could maybe expect the same choice as Ferdinand or a bit lower in HP as the initial mobility is already quite good, with the possibility of the historical engine being the top one.

As the tank is already in WOT and no tier changes are expected, only minor adjustments are foreseen.
WOT already upgrades this tank above historical plans so not much could be said.
If one wanted to improve slightly historical accuracy an 88mm L/100 or 105mm L/68 could be used instead of the 128mm L/55 as they would be more plausible as upgrade but still fictional.

The biggest historical stretch of this tree, but necessary to find a proper design for the tier, this was supposed to be Porsche proposal for the Lowe tank, dated 11 may 1942.

Coinciding with the "Schwerer Lowe" specifications, it was a 90 ton tank design, with 120mm front armor, 80-100mm side and armed with a 15cm L/40 (likely E-100s L/38) cannon.
2 Porsche engines of unknown power were supposed to push the tank at 30 kilometers per hour.

Now, for the speculative part:

A chassis length of over 7.7m is given, making it likely rear turreted, something that is to be expected by a Porsche design.
A width of around 3.8m is given, touching slightly above 4m with what is expected to be side skirts, or possibly with tracks mounted.

This would give it a pretty familiar look, one that WG took for tier X: 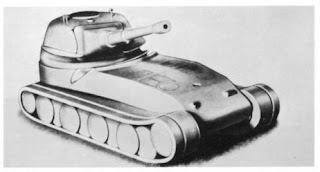 Playing with similar designs, one could imagine the final product as something close to this brutal merge:

The image above is of course NOT historical and it's merely speculation on how the Schwerer Lowe turret would look with a chassis similar in size to the Porsche design, in this case the Sturmpanzer Bar.

120-140mm frontal armor and E-100 level gun selection, it wouldn't be exactly top spec in either armor or firepower, so we could argue that this tank would be a turreted TD.
Starting with the 105mm L/68, one could likely grind the 128mm L/55 up to the 15cm L/38 or L/40.
Limiting slightly the turning ability an heavier gun could be likely carried, such as the 128mm L/61.

The above is an artist impression, however it's pretty likely the Sturmpanzer Maus would have looked like that.
Developed in tandem with the JagdPanzer E-100, it was supposed to be pretty similar in gun selection, with a choice between the 15cm L/63 (or L/68) or the same 17cm carried by the Jagdpanzer E-100.

A relatively simple trade-off, it would get slightly better armor in exchange for slightly worse mobility.
Aside from the above mentioned guns, extra long 128mm cannons up to L/76 were mentioned, however it is unlikely they could bring much tactical benefit, although one could prefer an extremely precise low alpha cannon.

With this, the line ends.
Although some pretty heavy streching from history has been taken in some cases, all tanks above existed at least in plan form as a list of specification.

No fantasy tanks or Wargaming developers have been harmed in the making of this article.
Posted by Zarax at 2:20 PM