So, last few hours have been quite interesting, regarding what will be the content of the 8.6 patch. What we think there will be and was (somewhat) confirmed is the following

Apparently, it's a Geschützwagen (GW) based on the Porsche Tiger suspension. The gun seems like something shorter and large caliber. I think we can safely assume this thing will go between GW Panther and GW Tiger (logical choice, putting it between GW T and GW E wouldn't fit historically), so GW Tiger and GW E will be kicked up to tier 10. As far as I can tell however, the arty is not historical, there was no Tiger (P) based artillery vehicle designed - but I will doublecheck.

Edit: According to SerB it's "GW Elefant", built for a 210mm gun. This vehicle is however not in Doyle or Spielberger books I believe.

What is that? I don't know. The hull has been identified as being the one of M47 Patton, the turret looks like a Batchat155, but could be really anything. Can't tell you any history of that one. It's probably not made up however, as the French experimented with all sorts of American hulls and they also (as one of the first European nations) had large amounts of M46/M47 pattons at their disposal.)

Edit 2: Confirmed by Storm to be T9

This vehicle has been identified as the SU-14 arty prototype (based on the T-35 hull). There were two made - one with a casemate, one without it. It can be assumed that the lack of casemate will allow it to carry heavier weaponry, so it might be implemented after the current tier 6 SU-14.

This one we know a lot about, because The_Chieftain talked about it in his 12 hour stream show (awesome event by the way, why can't EU server have something like that?), it can be found roughly at 6h30min mark onwards. 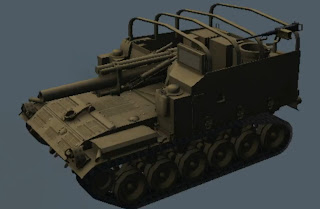 It's - to quote The_Chieftain: "...basically a M41 Bulldog chassis that you stick a 6 inch gun on". More can be found here. The main armament is a 155mm howitzer and it should be pretty nimble. Chieftain said it's going to be very mobile and it's going to have a nice arc of travel. 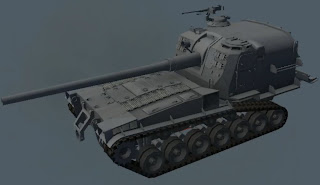 Basically it's a heavy SPG, based on the M47 Patton tank chassis. The M53 is the 155mm version, M55 a 203mm version (more here). Chieftain stated that if you like the GW Panther, you're gonna like this vehicle. The traverse is 30 degrees each way.

It's confirmed the T8 will become T10 in the US tree.

Finally, possible new Chinese premium tank (thanks to Fugaku, US forums for posting this).

As you can see, it's 113-ish hull and a 111 turret, possibly with some 122mm gun mutation. Not much else is known and it's highly unlikely anything will be found until its introduction, as virtually nothing is known of these vehicles.
Posted by SilentstalkerFTR at 9:54 AM