today, a new batch of vehicles was announced for the 0.8.6 patch of World of Tanks. One of the most interesting ones is the lowtier German artillery, designated as "GW 10.5 CM Mk.IV(e)" by Wargaming - Mugsy (US forums) - this designation was also used on the EU server. Here's a screenshot: 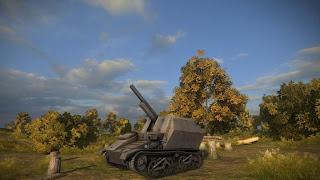 This designation is slightly wrong. Someone messed up the V and the I. In reality, it was a Mk.VI light tank that this artillery was built on, not a Mk.IV. After all, the picture itself was named MkVI(e).jpg when I downloaded it, so I guess it's just a Wargaming typo.

Anyway, this vehicle is rather interesting, let's have a look at it closer. The British Mk.VI light tank was the ultimate development of the long line of Vickers light tanks, going back to 1930 Mk.I and even further back to the Carden Lloyd tankettes. These tanks were very light recon vehicles (Mk.VIB weighted 5,2 tons) with thin armor and a heavy machinegun as its main weapon. In terms of 1940 they were obsolete, but they were produced nonetheless ( Mk.VIB was the most common version, from 1937 to January 1940, 914 were made, another model - Mk.VIC - was made until June 1940).

What happened was the British expeditionary force (BEF) took a number of these vehicles with them. In fact, the Vickers was the primary light tank for the BEF. Their performance was less than stellar however, they got torn apart by the Wehrmacht. Notably, insufficient armor and armament was cited as the reason of their failure.

Some Mk.VIB light tanks were left behind by the BEF during the Dunkerque evacuation and Germans captured them damaged, but more or less intact. It should be noted that even Germans, who happily utilised otherwise obsolete designs (such as some French light tanks) in secondary roles, found them completely useless and got rid of them quickly (some served as training targets for gun trials).

However, 6 were transferred to the German by the name of Alfred Becker, the commander of the Baukommando Becker unit. In 1940, 6 of them were rebuilt by the Germans to carry a 105mm leFH 16 howitzer and a MG34 machinegun. The howitzer was enclosed in a thin (11-22mm thick) superstructure and the vehicle was open-topped. In fact, the superstructure was thicker than the hull armor. The new improvised self-propelled gun was crewed by 4 men and powered by the original Meadows V6 (87hp), allowing it to go as fast as 50 km/h on the road (but only 20 km/h in terrain).

Earlier it was believed that these SPG's were never actively used and spent their "life" in Belgium as training vehicles. However, now it seems they were transferred to the Artillerieregiment 227, fighting near Leningrad in late 1941, where they apparently survived until 1942. Despite being essentially improvised vehicles, the Germans were allegedly quite happy with them.