I promised an article about the history of the VK7201. Well, here's what's I found. Everyone who has read my comments on this vehicle probably knows I consider it an unhistorical fake, made up by Wargaming's chief tank researcher, Yuri Pasholok.

Well, I was wrong. It's fully historical. But it's a pretty obscure vehicle.

First, a short Lowe introduction. The Lowe program was a (relatively early) very heavy tank program from 1941-1942. If you are interested in its particularities, I suggest you have a look at the Panzer Tracts - Paper Panzers. What we need to know for starters is that there were 5 basic Lowe models Doyle mentions, all proposed by Krupp. Here are their parameters, mentioned in Panzer Tracts 20-1: 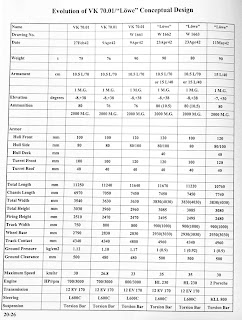 The common consensus is that the very early models had the turret in the back, while the later models had the turret moved to middle (this can be verified by checking the table hull lengths, comparing them to the respective gun lengths and then to total lengths of the vehicle). Contrary to popular belief however, there was never such a think as "Leichter Lowe" or "Schwerer Lowe", that nomenclature was made up, all the projects were referred to in VK (Vollkettenfahrzeug - tracked vehicle) nomenclature and later by the name of Löwe. It started as a roughly 75 ton tank, the early projects had the turret in the back, like this: Later, the turret was moved to the middle into what we know from the game as the Lowe. By the way, if you look at the table and compare it with the ingame Lowe, you'll find out that the tier 8 tank we all know is not historical, it's a mashup of various Lowe models. But that's really not the topic of this article.

So, where did the VK7201 come from? The first hint was that it is internally in game referred to as VK7201(K). Okay, so it was made by Krupp. German version of Spielberger's book offers an interesting theory. According to Spielberger, "an alternative Lowe chassis turretted self-propelled gun was originally started by Krupp along with the first Lowe project".

That was not uncommon at the time: the Germans always tried to use available chassis for more projects. For example, the superheavy Jagdpanzer E-100 on the E-100 chassis, or its competitior, Jagdpanzer Maus (yes, that's not a fake). But this project was rather special. It was concieved with some sort of unspecified 150mm howitzer (Feldhaubitze) in a round turret (unspecified where located, but according to the vehicle length, it can be theoretized it was in the back). The very interesting part is that this project was concieved as an infantry support vehicle chassis (weapons carrier), with superheavy frontal armor. This new type of chassis was designated "Infanterieunterstützung-Fahrgestell" (gotta love Germans and their combined words) - the "infantry support chassis" as a reaction on Hitler's direct demand for the development of superheavy vehicles for both destroying tanks and specialized heavy vehicles for supporting infantry (no doubt under the influence of professor Porsche and his own megalomania).

Plans were made to incorporate an unspecified other weapon. The vehicle was designated at first the VK7201, but later it was concieved the weight of 75 tons wouldn't fit such a heavy projected armor (originally, it was projected with cca 100mm frontal plate, but Hitler demanded as much armor as possible, ideally cca 200mm). The project then recieved a name of "Howitzer on infantry support chassis 'Lowe'", in German: "Feldhaubitze auf Infanterieunterstützung-Fahrgestell 'Lowe'", which can be shortcutted as F.a.I.Lowe (well, it probably wasn't in real life). Yea, you laughed, it's stupid, but historical, sorry.

Not much else is known about this project, not even its engine, so that's most likely made up. Its history presumably ends with the termination of the Lowe project in April 1942. I will later scan the respective part of Spielberger's book.

So, there you have it, not only is the Failowe historical, but so is the name in fact. See, Wargaming introduces only well-researched and historical vehicles. Kudos to Mr.Pasholok for uncovering this obscure and interesting, if silly-named vehicle. Long live the Failowe!