SS: Today we have 2 articles about the Chi-Ri development from Soukoudragon (US forums).

The Chi Ri Kai is what would be grabbing historically existing features and components and bringing them together. The most important part is the gun. I see no choice but for the 105 to be used. 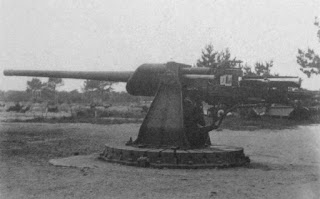 According to the Japanese wiki article that has this gun picture, this 105 has the single tray loader attach to it. By looking carefully, it can be seen. If this single tray loader was removed, it seems like the cannon can be mounted into the Chi Ri plan 2 big turret. That would give the Chi Ri Kai a big alpha and a high pen but with a slow reload. The 105 would be the top gun and the 75mm belt fed would be stock with the 88 available in the modules. This 105 would also be used, likely as the top gun, for the Tier 8 Ho Ri TD, but with the single tray reload attached. The pen, alpha, and accuracy, would still largely be of tier 8 or tier 9 TD gun quality on this tier 8 medium tank.

The hull would be based on the Ho Ri sloped TD.

Technically speaking, this sloped hull was based off the Chi Ri hull anyway. It's just a matter of taking this design and giving it back to the Chi Ri for the Chi Ri Kai. If you look closely, the picture identifies where the transmission, engine, ammunition, and the fuel tank would be located. Just like how these components were switched around in the Ho Ri 2 (e.g. the engine is in the rear in the Ho Ri 2), these components can be switched around to fit the large Chi Ri turret in the middle. As of now, I don't know what the armor would be of the front slope. But even by maintaining the 75 thickness, this very sharp slope of perhaps as much as 70 degrees would make for strong frontal armor.

For suspension, one of the various suspensions examined for the Chi Ri can be used. The Mitsubishi Heavy Industries Torsion bar plan gives the most modern feel.

So these 6 road-wheels with Torsion bars instead of the springs portrayed in this picture.
The Chidori suspension system is also a nice option.

The resulting tank could look something like this example: The Sloped Chi Ri hull, a 105mm cannon, and the MHI torsion bars suspension.

(Image made by forum poster: sp15)

And finally, all of the advance features from the Type 5 Chi Ri will carry over, such as the wide treads, the turret basket, gyro-stabilizer, long range observation, the electric motor that rotates the turret, and so on.

With that said, the Plan 2 Chi Ri turret would be quite under armored for tier 8. So then maybe an improved armored plan 2 turret could be used as the upgrade turret. Put on an additional 25mm from those add on plates to make 100 front or go with 125 to match the front thickness in the Ho Ri, whichever seems most appealing I suppose. Add on another ton in weight and make that 720 engine a 725 engine instead.

Aside from the optional upgrade plan 2 turret, everything here are real components creating a realistically feasible tank for tier 8.

One more thing to point out is exactly how other tanks can be implemented will affect how or even if the Chi Ri Kai could be suggested for use. For example, the planned successor to the Chi Ri, the Chi Se is optional for tier 8. While there is very little to go with on the Chi Se, the cheaper Chi Ri II and it's hull might be the more realistic approach for the Chi Se. Work in progress, work in progress...