This post is based on the material found and published by SoukouDragon on US forums. As far as I know, he uses original Japanese sources from various magazines and literature, making his research quite accurate. I will quote him in this article at some points, most credits go to him.

Now, the basics: Ho-Ri tank destroyer is a project based on the Type 5 Chi-Ri hull. Type 5 Chi-Ri was the most advanced Japanese medium tank, developed by the end of the war for defending Japan from the invasion. It was better than the Sherman and there were several projects, including a Chi-Ri II, if I understand it correctly (various armament variants were proposed too, including a belt-fed 75mm and an indigenous 88mm gun). In its ultimate form, it would be roughly equal to Panther II I think. This is how the single prototype looked: It's very likely we will see the Chi-Ri in World of Tanks (tier 7-8) in the upcoming Japanese tank tree. Either way, the Ho-Ri was supposed to be an Elefant-inspired heavy tank destroyer, based on the Chi-Ri chassis. The "classic" drawing (also quoted by wiki) depicts it as this:

As you can see, it DOES resemble the Elefant in a way. According to SoukouDragon, there are two variants (just like there were two Chi-Ri hulls). Here is the wooden model picture and stats SoukouDragon found during his research: 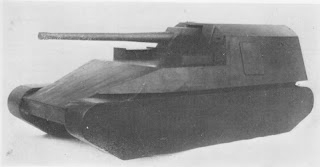 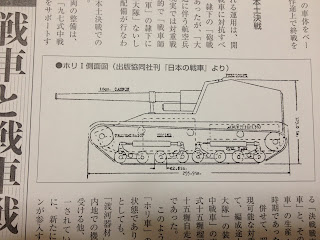 I will now quote SoukouDragon himself, because he describes it the best:

I have a gut feeling that this was the initial design conception and that later, for practical reasons, the Chi Ri hull was used for the elephant looking one we are all familiar with.

One thing to consider is that the 37mm seems to have an important contribution to the design rather then just being there as a leftover from using the Chi Ri hull.

1. It would be used to defend the tank from close range anti tank weapons.
2. To be used as a spotting rifle for the main weapon for long range shooting.
3. To shoot smoke rounds to provide cover for the tank.
4. The firing arc for the 37mm was +20 -15. Pretty nifty gun depression if multi gun support was available. 10 degrees to the left and to the right for a total of 20.

There does not seem to be any place for the 37mm cannon in the sloped version of the Ho Ri 1. If the designers wanted the 37mm to be installed, then they may have dropped the sloped design in favor for the Chi Ri`s 37mm. But in any case, it leaves the door open that both of the Ho Ri 1 TDs can be used. The slopped TD version could be part of the regular TD line, filling in a rather critical spot, or be used as a premium.

Unfortunately, the Maru magazine that I got this from and Haru`s 1978 book "Japan`s Tanks" don`t explain why there are two Ho Ri 1s. But nevertheless, both existed as projects with the Chi Ri based Ho Ri with the 37mm being closer to realization.


Another picture depicts the second version of the Ho-Ri tank destroyer, this time without the sloped frontal armor, but with the frontal 37mm: 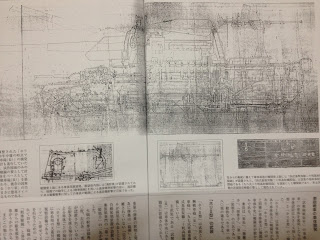 Most noticeable thing is the 20mm AA gun on top of the engine compartment. As far as WoT is concerned it does nothing. But I think it adds a rather cool look, like the AA gun on the IS7.

The 105mm cannon was specifically designed for the Ho Ri TDs. Like mentioned before, it had an auto loader and the rounds are single piece. To help with the increase influx of gas from the cannon during high RoF, a ventilation system was on top of the fighting compartment. There is also a periscope at the top of the fighting compartment. It is the close-up picture to the left of the machine gun picture. This periscope would be used in long range shooting. Well at least, that is an argument for the Ho Ri 2 to have good view range.

The Maru magazine didn't mention armor but the wiki has it at 125 front and 25 on the side.

Yea they still fit tier 8 and 9 and they have to. But they will be glass cannons, espicially the tier 9 TD. It is probably why the devs have mentioned the idea of a TD variant of the O-I for the top tier to help with armor. Their strengths will be firepower, good mobility, and good gun depression. Tier 8, the front armor is not terrible but it will be difficult to angle the front armor of 125(mm) because the side is so incredibly thin...25(mm).