In this article I will be looking at the modified Sherman Tanks of Great Britain, Canada, Israel, Yugoslavia, and other nations. Don't worry about other American versions right now.

Now you should all know the famous British version of the M4, the Firefly, or more officially the Cruiser Sherman VC. Fitted with the 17 pounder(pdr for short) the Firefly brought to the Sherman firepower that could destroy almost anything it came up against. The need for the Firefly arose due to the slow production of the British Challenger, so the Brits decided to cram the 17 pdr into the Sherman's turret that originally mounted the 75 mm gun. The M4's large turret ring and the 17 pdr's heavy but small breech made the conversion possible. Muzzle breaks, an enhanced recoil mechanism, and a new depression/elevation mechanism(-5 degrees to + 20 degrees--Darn those Brits for making the Sherman uncomfortable). 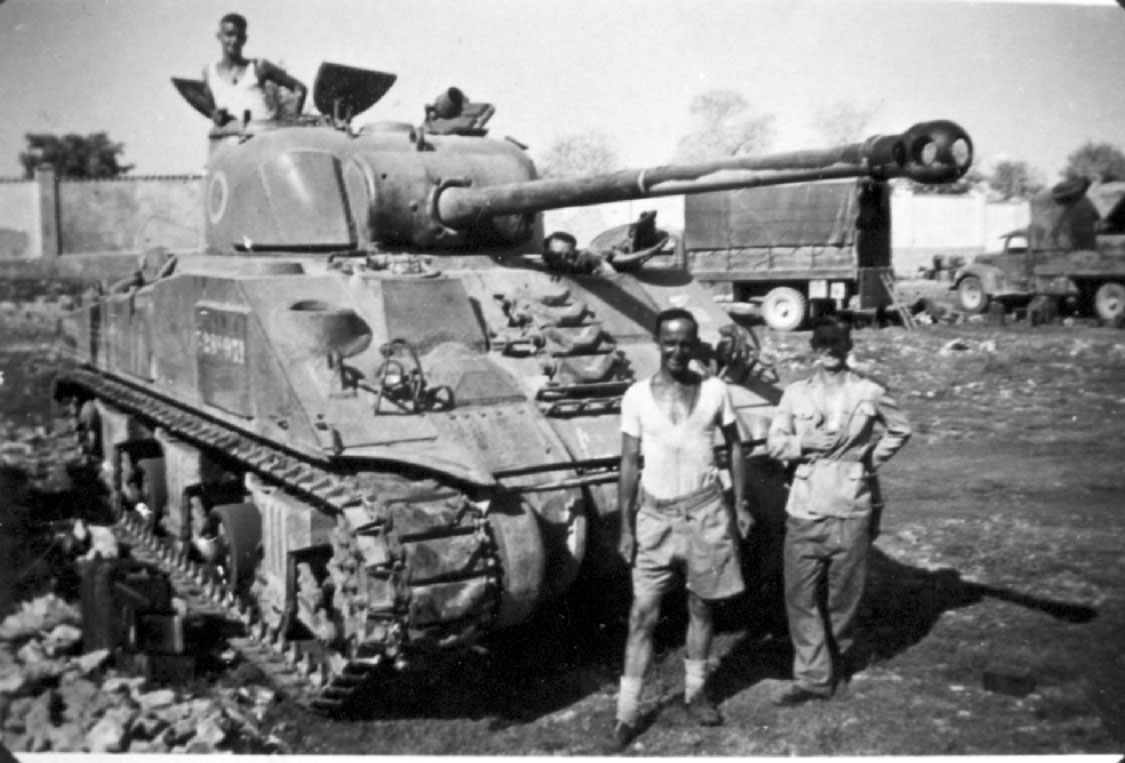 Here are some Kiwis in front of thier Firefly which is disguised as a regular Sherman.


The Firefly was successful when it was introduced in 1944 in France. The 17 pder was more than capable of destroying Panthers, Tigers, and even a Tiger II if the Firefly loaded an APDS round(I don't recall any Firefly vs. Tiger II engagements though).

Another interesting tidbit about the British and their Shermans is that the method of ammo storage practiced by the British was very poor and led to increase of fires when hit. The Americans solved their ammo storage problems very quickly, but not the poor Brits.


The Canadians licensed the M4A1 to create the Grizzly. The Grizzly only differed from the M4A1 by having slightly thicker armor and the unique track design but it was the AA version of the Grizzly that is noteworthy(there was a Grizzly Firefly though). The Skink used a modified turret that had 4 20 mm Polsten autocannons. The range of fire of these guns goes from -5 degrees to +80 degrees. A single Skink was deployed with the Canadian forces in 1945, by that time the Luftwaffe didn't really have a whole lot left so the Skink found a new job of cleaning out German soldiers from defensive positions.

In 1948 the Israelis got their first Shermans in 1948 by scrapping together some pieces from some British and Italian military dumps. The first couple Israeli Shermans proved quite capable versus their Egyptian opponents and as the Israelis received more Shermans from the British and the Americans they decided it was time to give the Sherman some firepower. Before the Israelis had a variety of 75 mm, 76 mm(the 76 mm armed Shermans were kept in service as the M-1), and 105 mm guns; the Israelis even used pre-WWI Krupp 75 mm field guns due to lack of armament. The first M-50 Super Shermans(or Ishermans---The IDF called it the M-50 officially) of Israel appeared in 1956 armed with the French 75 mm gun that was mounted on the AMX-13. The turret needed a new mantlet and a larger/heavier turret bustle in the back. Improved suspension was also added onto the Super Sherman. This new gun gave the Sherman a very reliable weapon that could knock out the Egyptian T-34/85s and Churchills with ease. Between 1956 and 1967 the Israelis developed the most powerful Sherman variant, the M-51 Super Sherman. The M-51 mounted a very powerful French 105 mm gun (same basic weapon as on the AMX 30, but shortened) which could penetrate upwards of ~360 mm of armor using HEAT rounds. In 1967 and even in 1973 the Super Shermans proved very valuable and the M-51 proved that it could knock out the latest Soviet MBTs such as the T-55 and the T-62. The Centurions, M60s, and the upcoming Merkevas meant the Sherman was done in Israel. Bringing a new meaning of carrying a big stick.


Israel exported some of the Super Shermans to Chile. This gave the Chilean Army the most dangerous tank in South America at the time. Some of these Super Shermans had their 105 mm guns removed in favor of a new high velocity 60 mm cannon, the new tank is called the M-60.

Egypt had a few Shermans of their own. The Egyptian used French supplied Shermans that have had the original turret removed in favor of the FL10 turret used on the AMX-13.

The Yugoslavians also got their hands onto the Sherman. The M-634 was a project using the V-2 engine from the T-34 in the Sherman, the new engine have the Sherman some extra horsepower and speed.

"and boom goes the dynamite"

Shermans continued to see service with nations up until the 1990s. They have seen service in Latin America, the Balkans  the Middle East, the Indian subcontinent, and Central Africa. The only continent to not see Shermans in combat is Antarctica(the least comfortable continent in my opinion).


Sources:
http://mailer.fsu.edu/~akirk/tanks/
Sherman: History of the American Medium Tank by Hunnicutt
Armour of the Middle East Wars 1948-1973 by Zaloga
http://forum.valka.cz