SS: Today, we have a guest article from SoukouDragon (US server) on one of the (confirmed) Japanese hightier tanks. Enjoy! 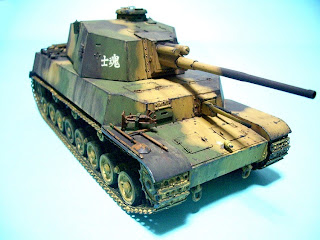 A Japanese Tiger? No

When Japan surrendered, American forces discovered Japanese late war military projects all over. One of such was the biggest Japanese tank U.S. forces have ever seen, the seemingly half completed Chi Ri, sitting there without a main cannon installed. The turret was huge. More than large enough for a 75mm cannon. There were some Japanese 88mm AA cannons so Aha! Just like the Germans, they must have been planning on putting these 88mm cannons in the Chi Ri! And behold, the idea of the Japanese Tiger was born.

Recently, in Japan, more research has been going on. In documents about the Chi Ri`s development, there has never been any mention of installing an 88mm cannon in the Chi Ri or on any other Japanese tank. But what these old documents have revealed the reason why the turret was so large. It was meant for a 75mm belt-fed auto loader. 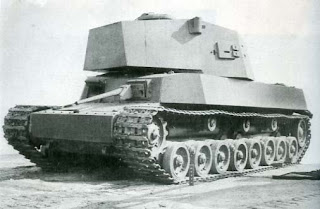 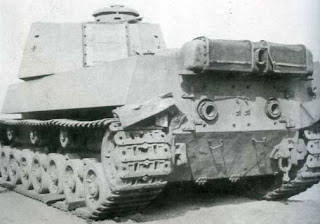 It could fool anyone into thinking that there was a lot of armor on the thing, like the Tiger. But no, it may be disappointing, but the front armor of the turret and hull was only 75mm. The side armor ranged from 25 to 50mm in thickness. Despite the size, it weighed only 37 tons. This is by no means armored like the 55 ton Tiger. The Chi Ri was not designed as a heavy tank; it was designed as a medium.

So a gigantic medium tank with modest armor…how is that advance? Sounds more like inefficient use of armor…

During 1943, by looking at the tank battles between Germany and Russia, there was fear that the Chi He and the Chi To could be underpowered by the time they would enter production. At this time, many technological inspections and planning have occurred for the Chi Ri. These included ventilation, transmission, suspension, 550 HP gasoline engine, and easy access to the engine for maintenance. Targeted top speed was 42kph. Improved ventilation was necessary because of the anticipated increased influx of poisonous gas when using the high rate of fire from an auto loading cannon. The main armament would become the Type 5 75mm cannon. It was planned to attach an auto loader to it. Here is a picture of it being tested with the single tray auto loader. 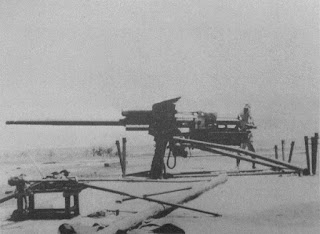 However, steps were taking to ensure an even more advance design could be made available.

In September 1943, a plan 1 and a plan 2 were outlined for the Chi Ri. The goal of plan 1 was to use the current technology developed so far to produce a finished Chi Ri within 1 year. Plan 2 was an ambitious plan to push the edge of technology. The Chi Ri tank discovered by the American forces was the Plan 2 tank. 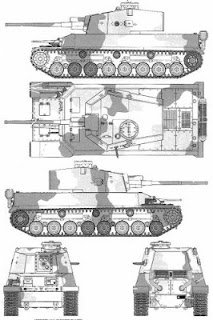 The biggest difference between plan 1 and plan 2 was the suspension and the turret.

There was a total of 6 suspension plans examined. Three plans from the Technology Research Institution (TRI) and three from Mitsubishi Heavy industries (MHI).

One plan from TRI was a common Japanese style coil spring suspension which was already proven to work on other Japanese tanks. The other two plans were staggered arranged road wheels much like the notorious suspensions found in German tanks like the Tiger and Panther. One with coil springs like this picture and another with torsion bars.

The three plans from MHI were 6 large road wheels. One was with coil springs and one with torsion bars.
Ultimately, the Japanese went with what they were used too.

The Suspension used very wide treads. The width was 600mm. For a 35 ton class tank, this would have produced a very impressive ground pressure value. The goal was a ground pressure of about 0.6 to 0.7 kg/cm². Compared to other tanks, this was a very good value.

Out of all these tanks, only the T-34/76 could match. This makes a very strong case for good hull traverse and low ground resistance. They must have been thinking about rice paddies.

In order to accommodate a load of 100 75mm rounds and to fit in a belt style auto loader, the turret was enlarged. The plan 1 turret would likely not be capable of handling this task, therefore the large turret was designed. To increase the speed of target acquisition, the turret would rotate by an electric motor, increasing the speed of turret rotation. Another advanced feature was the gyro-stabilizer for the 75mm cannon. It was demanded for the Chi Ri to be able to engage targets up to 2000 meters away so a long range observation device was installed. One other feature is that it was the first Japanese tank, and one of the few tanks in all of WWII, to have a turret basket built in.

Probably the most controversial feature was the secondary 37mm cannon. It was likely intended to be used for soft targets that would be overkill for the 75mm cannon and thus free up the 75mm for more critical targets.

In 1944, the belt fed auto-loading cannon was abandoned. Likely due to the anxiety of trying to create a belt system that would move 900mm long shells around within the turret. However the large turret was already designed. In its place, a single tray auto loader was to be attached to the Type 5 75mm cannon instead thus still maintaining a fast rate of fire. It is believed that very likely the Chi Ri underwent running and shooting trials in March 1945. However, the simpler Type 4 Chi To was selected over the Chi Ri for production. The likely reason why the Chi Ri was found armless is because the Chi To mounted the same 75mm cannon and thus the Chi Ri’s 75mm cannon was likely moved to a Chi To tank.

Adding the Chi Ri to World of Tanks

Here I will describe how the Chi Ri could be implemented into the game as a tier 7 medium tank.

For the needs of the game, a little more horse power would be needed. With the 800 HP H9 engine, there is a lot of potential for upgrades from the 550 HP point. Essentially, a suitable de-tuned value could be determined for balance purposes; as long as it does not exceed 800. A top engine with 675 HP would give the 37 ton Chi Ri an 18.2hp/ton rating.

Picture of the 88mm 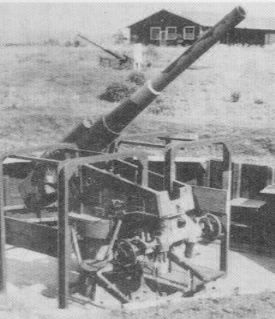 Strengths
High DPS with either the alpha hitting 88 or the rapid fire 75.
Good mobility.

The expected game style of this tank will be taking advantage of its high DPS potential. The 75mm belt cannon gives it insane DPS potential in a sustained brawl but loses out in long range shooting compared to other sniper capable cannons or peek-a-boo tactics with its low alpha and penetration. When wolf packing or against a distracted enemy, the 75mm belt fed cannon will decimate a target in short time. It will bully anything the cannon can penetrate. However heavy armor will nullify a Chi Ri tank armed with the 75mm belt fed cannon.

Something curious about the belt fed cannon is that it seems to be unknown as to how the crew could swap between HE and AP rounds with a linked belt system. In concept, the Chi Ri was designed as an anti-tank medium tank. It could be that all 100 rounds were AP rounds. That does present an explanation for why the 37mm cannon was put on, for it`s HE ammunition. But that is pure speculation on my part. Sadly as I researched into this tank, more questions arise. But anyway, if the belt-fed cannon was to be an AP only weapon, then it does make for a risky play style, but, I feel, a popular niche.

The 88 offers a higher alpha and marginally better penetration for more common brawl style playing. With the higher alpha it gives the Chi Ri the ability to peek-a-boo and premium rounds or the better HE rounds give it the ability to deal with heavier armor better than the 75mm cannons.

While the 88 was not planned for the Chi Ri, the very large turret would undoubtedly be able to handle an 88mm caliber weapon.

What this tank cannot do is run out in the open. It will be spotted. It can’t be sneaky, it is just too large. Its armor can also be penetrated by just about anything. The maximum 75mm armor is not even well sloped.