those who have followed my Czechoslovak tank series might have found the name of the tank "TNH" in the "medium tanks" section. This vehicle platform (the best known variant thereof being the light tank serving under the Czech name LT-38 or German Panzer 38(t)) had many offshoots, usually specifically designed for the customers who ordered them (Lithuania, Sweden, Iran and others). The LTP is one of the more interesting and exotic ones. LTP means "lehký tank, peruánský" (light tank, Peruvian) and it was built by ČKD/Praga specifically to satisfy the needs of the army of Peru. Basically, what happened was - the first "predecessor" of the whole series was the THN. It was a rather successful design, made for Iran, produced between the years 1935-1937. Of course, its success attracted other potential buyers. Peru was one of them and certainly one of the most distant ones, if not THE most distant one.

A picture of one Tanque 39. It was named after the region, which participated financially in its purchase The negotiations were held between 1936 and 1938 and were led by Col. José Tamayo from Peru. The most important demand of the Peruvian army was that the vehicles would be able to operate independently and without problems in high altitudes. Peru is a country with many mountains and the low air pressure in high altitudes could pose a serious problem. To compensate for this, the Praga engineers increased the air intake to the engine while using better compression ratios. The result was good - the vehicle could operate in any altitude up to 4500m above sea level without any performance reduction. The vehicle would also have to be light (mountains are no place for heavy or even medium tanks, at least back then they were not), with reasonable firepower and adequate protection for its time. Naturally, there was a question of who the vehicle would have to fight. Peru did not need a battle tank designed to take on hordes of incoming Panzers, rather than a nimble quick vehicle with enough firepower to knock out enemy infantry strongpoints and of course to serve as a COIN vehicle (counter-insurgency).

LTP offered a perfect blend of those parameters.

The performance characteristics were following:

(keep in mind that the rebels and enemy states the vehicle had to fight rarely had any armor at all apart from tankettes, let alone anti-tank rifles and anti-tank guns, Ecuador, that waged a limited-scale war with Peru in 1941 acquired its first Stuarts and Marmon-Herrington tankettes a year later)

After roughly two years of negotiations, an agreement was reached and 24 vehicles were ordered (plus the prototype) and brought in service under the Peruvian designation Tanque 39. Along with the negotiator, José Tamayo, first vehicles were transferred to Peru in Lima under the supervision of captain Hector Cornejo (technical supervisor) and his two assistents (one of who was a native American).

The technical trials in Peru were the place where the LTP legend was born. The prototype vehicle worked perfectly. In internal ČKD archives an incident was mentioned where - during the trials in the mountains at 3700m above sea level in September 1938, the vehicle driving on a mountain road next to a slope slipped from the slope and fell 5 meters, tipped on the turret. The tank proved to be extremely resilient - the damage was minor and the vehicle was repaired by ČKD technicians overnight - next day, the trials continued. This incident actually spawned a whole legend about the vehicle. It was told many times by many people and in time, people started to believe that the tank was tipped back on the tracks after the fall and continued running without any repairs. While a gross overstatement, these rumors contributed to the excellent reputation of Czechoslovak tanks in South America.

By the time the trials ended and Peru decided to order some vehicles, a full mobilisation was taking place in Czechoslovakia (it was the time when people still thought there would be a war with the Germans) and the vehicles, currently manufactured for Peru, were confiscated by the Czechoslovak army. After the mobilisation was cancelled, they were returned and in November 1938, first 6 serial vehicles were sent to Peru. 24 were made in total and the last vehicles arrived in Peru on 27.2.1939.

The tanks saw action for the first time on 19.2.1939 against a group attempting a coup d'etat. Their debut was a success and in June they were officially presented during a military parade in Lima. During the Peru-Ecuador border war in July 1941, the vehicles were successful again (12 were operating against Ecuador as a part of "Group North").  In 1946, more vehicles were ordered from ČKD, but that order was never fulfilled - only a certain amount of spare parts was sold to the Peruvian army in 1950.

And so the tanks continued to soldier on. In 1970's, they were used to fight the maoist rebels from the "Shining Path" movement and the last two remaining vehicles in operation were used until 1988 for patrol duties near Callaa. By that time they were completely worn out however and they were taken out of service to be used as military monuments. One of the tanks was recently sold back to the Czech Republic and is currently located in Prague military museum. My own photo of the vehicle (it's in very poor shape) 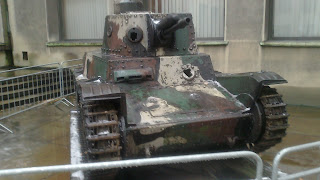 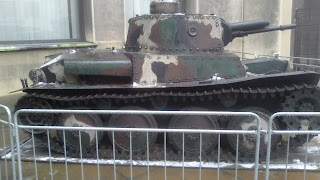 Posted by SilentstalkerFTR at 2:31 PM