To follow my last article the US still tried to develop a light tank to replace the M41 Walker Bulldog after the L Series of proposals. In June of 1954 a new Question Mark Conference, the 3rd of its kind, was held to discuss what new light tank design will join the US arsenal. Six designs were proposed, the TS-8, TS-10, TS-26, TS-32, TL-3, and TL-8. I will not discuss the TS-26, TL-3, and the TL-8 since they would use 105 mm recoilless rifles instead of a conventional tank gun, so it is easy to say you won't see them in WoT. A little info on the names: The S and the L in the designation denoted whether the design was meant to be a short-term or a long-term project.

The TS-8 and TS-32 were both conventional designs using the same 76 mm gun as the M41. The engines would be the AOI-470 and the AO-470, both would have around ~15 hp/t and should have some agility. These designs were very compact and should be very small. Frontal armor is only 12.7 mm thick.

The TS-10 was stranger. The TS-10 had a remote-controlled turret/gun pod with a 76 mm autoloader with 20 rounds in a magazine(The crew had to reload the magazine externally). The crew was dropped to 3 crew members from 4 in the TS-8/TS-32 tanks. Mobility should be similar to the other projects. The TS-10 should have some of the most comfortable gun depression values as well due to the gun pod design.

None of these designs from the 3rd Question Mark were chosen for development. In 1955 Cadillac designed 9 conceptual light tanks. Here, I will discuss the vehicles that were proposed with conventional armament  the TLC, TLD, TME(c), TME(b), and the TMG.

The TLC was 14 ton vehicle that was to use a 76 mm gun in an oscillating turret. The TLD was a 16 ton vehicle that was planned with a 90 mm main gun in a conventional turret. Both had no effective armor but would have good mobility. An early form of a light based(called Optar) range finder was also intended for use on the TLD.

The TMG wasn't really a light tank. It's weight of 30 tons might designate it as a medium. The gun on the TMG would be a 105 mm gun in an oscillating turret. Speed wouldn't be too quick but the TMG would still be very mobile. The same Optar range finder was to be used on the TMG as well.

Here is a table of the Cadillac concepts stats and some pictures of the models below.

I really want these little models.

I would now like to discuss the General Motors tank called the X-Weapon for the ASTRON project. ASTRON lasted from 1953-55 and was to find a new medium tank for the future. General Motors decided that armor would be useless and decided a very fast, lightweight tank would be better than a slower but more heavily armored vehicle(which were proposed by other teams working for the ASTRON project). The X-Weapon was armed with a non-stabilized T208 90 mm smooth bore main gun. Top speed should be ~80 km/h and it should weigh ~26 tons. The ASTRON X-Weapon was more-or-less the spiritual successor to the Hellcat, an ultra-fast vehicle with no armor and a good weapon. In 1955 the ASTRON program became intertwined with other US tank programs such as the T95 tank, the Rex tank proposals, and others which eventually led to the Abrams. I find this tank to be very smexy and should be very comfortable to play in WoT if the gun isn't an issue. 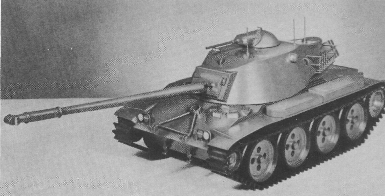 Here is a 4 way view of the ASTRON X-Weapon
Why did they choose a smooth bore? Why? Why couldn't they use a regular gun?
This tank is so beautiful.

I would really enjoy if WoT ever adds any of these designs. Most of them fit all the requirements to be implemented in WoT. The TS-8 and TS-32 look like solid tier 6/7 designs. The TS-10 would very interesting, would be best at tier 7 IMO. The Cadillac designs could almost create a new line of vehicles, personally I believe either the TLD or the TME(c) should be the tier 8 light after a tier 7 M41 Walker Bulldog. If I was to choose, I would have the TLD become the tier 8 after the M41. The TMG could be a faster and more comfortable T54E1 at tier 9. The ASTRON poses a problem because of the smooth bore, it would be a great addition if WG replaced the gun, but it shouldn't be expected.

Both authored by R. P. Hunnicutt

Stay in tuned for Part 3 among other things.