A "Short" History of Anti-Tank Rifles

Instead of tanks, I would like to discuss the Anti-Tank Rifles(ATRs) of the world. The ATR was designed to kill tanks, a job that most failed to due reliably. After it became clear that these weapons were more of a burden than a help they disappeared from the battlefield.

The first ATR originated in Germany, the Mauser "Tank-Gewehr" Model 1918. The Mauser 1918 was an enlarged Mauser pattern rifle with a very long barrel, a heavy butt, a bipod, and a 13x92SR T-Patrone round. It was very large weighing 39 lbs(17.7 kg) and was 66.13 inches long(1680 mm). The Mauser 1918 allowed German Infantry to battle against the Allied armored vehicles which were immune to most machine gun and rifle fire. The Mauser 1918 fire the 13 mm round at 913 m/s and could penetrate ~25 mm of armor at ranges up to 200 meters. It was a single shot design.

A little more detailed look at the ammo shows that the Germans actually copied Polish ATR ammo and started using Polish type ammunition instead of theirs after realizing the Polish ammo was clearly superior. The Germans also had developed a tear gas capsule which was a complete failure, no reports of enemy soldiers being exposed to the tear gas have ever surfaced. The Allies only found out about the tear gas round by capturing ammunition.

The SS41 is a very rare German ATR design which was actually developed by the Czechs in Brno. It was made in very small numbers by the Waffen SS and is one of the first bullpup designs that was ever used by any military. It had a 5 to 10 round magazine and a very awkward reload system(see below). This complicated the manufacturing and exposed the breech to more dirt and dust. It had sightly less muzzle velocity compared to the PzB38/39 and was obsolete by the time it saw combat in 1941.

Here is how you reload the SS41, brought to you by world.guns.ru:
"to open the breech, shooter first has to unlock the barrel from the breech by rotating barrel counter-clockwise; this is done by turning the pistol grip, which is attached to the barrel, right and up. Once barrel is unlocked from stationary breech, it can be pulled forward by pushing the pistol grip to the front. If the spent case is present in the gun, it remains stationary against the breech, held by extractor. Once the barrel is fully forward, the spent case is free to fall out of the gun. Barrel then is pulled rearward, and upon this movement it picks up the fresh cartridge from the box magazine, which is attached to the stationary stock / cradle at the angle. Once the barrel is in its rearmost position, enclosing the fresh round in the chamber, it can be locked to the breech by turning the pistol grip down. Now the rifle is ready to be fired."

The reason why I talked about the S-18/100 first is that the German Panzerbuchse Modell 41(PzB41) was a German modification of the Solothurn. The PzB41 made it into production due to the realization that the PzB38 and 39 would be obsolete within a year. The PzB41 fired a 20x138B round at 731 m/s which could penetrate 30 mm of armor at 250 m. The PzB41 however was a complete flop. The main Soviet vehicles including the T-34 were all but immune to the PzB41. The Italians used it in 1943 with limited success.

The Finnish developed one ATR of note, the Lahti Model 39. The Lahti was modified from a 20 mm AA gun and fired the same round as the Solothurn ATRs. The Lahti had a 10 round magazine and was suppose to fire semi-automatically, however it is entirely possible fire automatically with a cyclic rate of 500 rpm(which helped convert the Lahti bak into an AA weapon). This weapon was 88 inches(2232 mm) long and weighed 94 lbs(42.1 kg). The Lahti fired the 20 mm round at 900 m/s and should have superior penetration compared to the Swiss/German 20 mm designs. Only a couple of Lahtis saw service in the Winter War and were moderately successful versus early Soviet armor. By the time of the Continuation War the Lahti was useless versus T-34s and mainly used versus lightly armored vehicles and emplacements.

The British meanwhile developed their own ATR in the mid 1930s called the Boys Anti-Tank Rifle designed by Enfield. It was originally called the Stanchion but was later renamed the Boys after Captain H.C. Boys, one of the chief proponents in the weapon's creation. Issued in 1936 the Boys saw service in France, North Africa, and the Far East. The Boys fired a .55 caliber(13.99x39B) round at over 800 m/s, this allowed for penetration upwards to 23 mm at ranges up to 100 meters, it did this via a bolt-action system with a 5 round magazine. The weapon weighed 35 lbs(16 kg) and was 64 inches(1575 mm) long. The Boys was produced up until 1943 and was a staple weapon of the Home Guard. The Boys also saw usage versus weakly armored early panzers and Italian tanks in France and North Africa. It was also used by the USMC Raiders which actually reported the destruction of Japanese flying boats by the Boys ATR. The Desert Rats also carried the Boys ATR. Both Finnish and Russians also received shipments of Boys ATRs. The last known usages of the Boys dates to the Korean War when the Boys where converted to fire .50 BMG rounds and were successful long range weapons against Chinese forces, even later some saw usage in the Yugoslav Conflicts.

The Polish ATR which used high velocity lead rounds which performed much like HESH rounds. Maroszek Kb Ur wz.35. This ATR was developed in secret in late 1935 and over 6000 copies were issued to Polish Forces before German/Soviet Occupation. The Maroszek fired a 7.92x107 round which could penetrate 20-30 mm of armor at up to 100 meters at 1290 m/s. It held 5 rounds in a detachable magazine. This was more than enough to defeat German Panzer Is and IIs. The Polish tried their best to create the lightest ATR in the world, the Maroszek was 69 inches(1760 mm) long and weighed just over 20 lbs(9.1 kg). In my opinion the Poles created the best ATR ever made and could have been very successful if its use was more widespred. The Japanese also tried to produce an ATR but ended up making a small support weapon. The Type 97 was a huge weapon weighing upwards to 152 lbs(68.93 kg- almost as much as me) and was 82.5 inches(2095 mm) long. The Type 97 was an automatic(usually fired semi-automatically) weapon firing 7 rounds from a vertical magazine, these rounds were 20x124 mm rounds. The 20x124 fired at 693 m/s and could penetrate some of the USMC light tanks in the Solomon Islands and were reported to be in use in 1939-40 in China. The Type 97 was quickly put out of service and many were converted to the Type 98 which fired a more powerful 20 mm round and was mounted on a wheeled carriage.

Lastly we have the Soviet ATRs. The Degtyarov PTRD and the Simonov PTRS were both developed and put into production around the same time right after the start of Operation Barbarossa. The 14.5x114 mm round fired by both rifles proved very effective, penetrating armor up to 40 mm at 100 meters. The Dehtyarov PTRD was a much more simple design compared to its brother and was more reliable in combat.  These ATRs also made the usage of side skirts widespread among German AFVs and was one of the causes that led to the Panther II project in 1943. These guns were known to be used by the Chinese/DPRK forces in the Korean War and it is entirely likely that small numbers have seen action throughout the Cold War and into the Yugoslav Conflicts. The PTRD was a single shot weapon while the PTRS fired semi-automatically from a 5 round magazine. The PTRS weighed ~46 lbs(20.9 kg) and was 82.9 inches(2108 mm) long while the PTRD weighed ~38 lbs(17.3 kg) and was 79 inches(2000 mm) long. 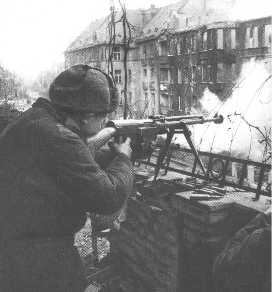 
Feel free to add/correct my info.