Not a direct translation, redacted some parts for better comprehension

On 12.5.1943, to preliminary projects of self-propelled guns were sent to the representatives of the artillery committee of the Main Artillery Directorate (GAU - Soviet artillery command) and of the technical committee of People's Commissariat of Arms (NKV - basically Soviet ministry of defence). First of them was the SU-2-122 (twin barrelled 122mm on T-34 chassis), the second project recieved SU-203 factory designation. It was designed by OKB-172 in Perm (OKB - experimental construction design bureau). According to its description, the task was to develop a heavy SPG "based on KV-14", carrying a 203mm M-4 mortar.
It's worth mentioning that when working on it, the designers didn't have a "free hand". According to the documents, the project was initiated by Major-General A.A.Tolochkov, with whom the factory design bureau agreed upon the prerequisities and demands, that formed the backbone of the design. 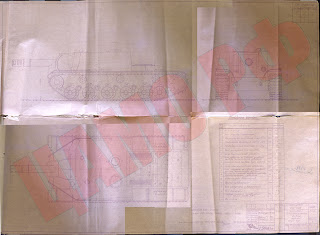 The "based on KV-14" character of the development can be attributed to the fact that the head of the designer group was A.F.Smirnov (in the SU-2-122 and SU-203 plans he's mentioned as the leader of the project). From the original design the vehicle was to be based upon, only the gun mantlet and a part of armor remained, the rest was a brand new vehicle, based on KV-1S. Because the targetting mechanism for the M-4 mortar was too big to leave room on the left for the driver, he was moved to the right side of the hull.

The problem with the commander of the vehicle, who in the original SU-152 sat on the right from the gun was solved simply: he became also a gunner. Inside the hull, there was enough space to store only 20 rounds for the M-4 mortar (these rounds were just as big as the ones for B-4 - 100kg each).

The technical commitee decision about this project came very fast. It was found out that increasing the caliber does not always mean increasing the firepower. SU-203 was designed with the destruction of fortifications in mind and it turned out that the ML-20 (the SU-152 main gun) was better suited for this task. ML-20 could penetrate 1,4 meters of concrete, M-4 only 80cm. In other words: it was not worth the effort.
Posted by SilentstalkerFTR at 10:47 AM