So, here I was browsing my favourite EU forum section *trollface* - and ran into this gem from today morning: 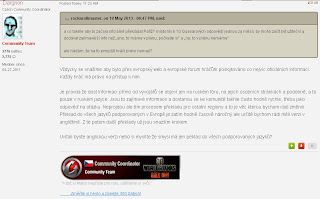 For the most of you, who don't speak Czech: Dargnon (Czech community organizer) basically says: "We want the European players to have as much info as possible.... bla bla bla.... because every player has the right to have an access to them."

Odd formulation. Anyway, it gets better:

"It's true that a lot of info from the developers shows up only on RU forums, or on their personal blogs and only in Russian. These are interesting pieces of information and they do get to the community rather quickly (SS: I accept standing ovations, thank you :) ), for example as answers to the questions. This info however doesn't go thru the translation process and that's something we'd like to change. Translations to all the languages supported by EU forums is very time consuming, but we'd like to have an official English version. It gets simplier after that. Would you like to have an English only version, or do you think the only thing that makes sense is to translate to all the languages?"

So, basically it took months, but Dargnon is saying what I was saying ages ago, when I was still arguing with Ecturd on the EU forums. Took you long enough. The only thing that makes sense in one English version. This post (which wouldn't be posted if not sanctioned, I doubt it's just a personal rant by Dargnon) basically shows WG EU is starting to cave in and eventually, there will be some official version of FTR.

Of course, Dargnon is wrong on one thing: it doesn't "get easier" after that. Typical example is the confusion about the "one map developed" from the last translation batch. I was in a hurry and translated it so that it can be interpreted in two different ways. What I meant was basically that one map is developed (as in, the developed already, the development was finished) and this map will come in 8.6. But the some people (notably the Czechs who are doing the translation of FTR to Czech, ironically enough) took it as "WG is currently developing only one map", which isn't true (there are two winter maps - "Stalingrad" (not sure it's a final name) and some open map "Tundra" from what I heard, plus one new "American" map).

Anyway, rejoice, folks, you might get "official FTR" at some point :)

Posted by SilentstalkerFTR at 11:54 AM