Warning: Long Read Inbound containing My Speculation and Hopes of the Future of America's TDs in WoT.

In my article "Fake American Vehicles" I pointed out some discrepancies between WoT and History that should be fixed.  The article included the T25/2, T28 Prototype, T28, and the T110E4. Here I will show you guys my version of the American TD Branch which has 3 full lines of vehicles.

The M2 AT was one of the first tank destroyers developed in America. It was a modified M2A1 Light Tank with new open turret housing a 47 mm automatic cannon firing 5 rounds. The 47 mm was an improvement over the 37 mm Browning that you can find on the Cunningham and the T2 MT. Penetration was quite poor and the project was cancelled in 1937. 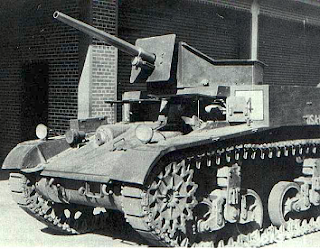 The T13 was developed as a light tank but lacked a turret. It was to be a little over 3.25 tons and was a tiny vehicle in general. The top speed is 56 km/h and armor was to be fairly tough. The guns on the T13 are lacking. Two 20 mm autocannons and the .50 cal were proposed. The T13 was cancelled in April of 1942. I would like to think the T13 would drop the .50 cal and have a 37 mm gun squeezed into it.

The T41 was practically a proposed improved T18 with sloped armor. A mock up was produced in early 1942 but the production on the M8 GMC halted any further development. In WoT you could guess the T41 will get a better gun such as the 57 mm M1. 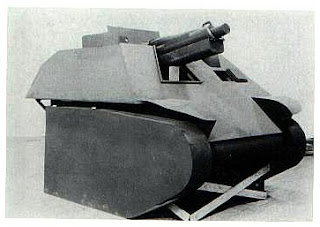 The T42 is the M18's grandfather. In late 1941 development of the T42 began as a GMC version of the T9(which became the M22 Locust). By the end of its development it evolved into a vehicle with Christie suspension and a new hull. The gun was to be the 37 mm but I would like to have something more for the T42, it would be nice to see the 37 mm w/ the Little John Adapter as the T42's top gun with ~90-100 mm of penetration. IRL it was unable to mount a 57 mm gun and the T49 project was started in Jan. 1942 due to that.

The T82 should stay the same.

The T56 is the brother of the T57 we know as the American tier 2 arty. However both the T56 and T57 were designed as tank destroyers IRL. The T56 was based on the M3A3 Stuart chassis and had a rear mounted 76 mm gun(3 inch M7) with a rather thick gun shield. A pilot was completed in Nov. 1942 and tested at Aberdeen. It wasn't a great vehicle(neither was the T57) and both projects were cancelled. I would like to see the M1A1 to be the top gun on the T56 in WoT. 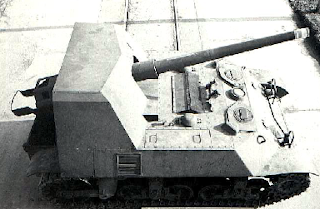 I would like to make some changes to the M8A1. The top turret is based off the M18's turret but there is no evidence saying it was ever mounted. I would propose the T50 turret be used. The T50 was a project to make a TD version of the M3 Stuart, the turret should fit fine on the M8A1. No real changes in performance should occur.

The T40 should remain the same, you could rename it the M9.

At tier 5 we will have 1 new tank, the T53E1, which is the most uncomfortable vehicle made in America. The 2nd pilot of the T53E1 should be the preferred version for implementation.

The T53 was a rushed project to mount the 90 mm M1 AA gun(M3 90 mm) onto the Sherman as a dual AA and AT weapon system. The first vehicle just had the gun mounted on the back on the M4 chassis with little modification. The T53E1 was slightly improved and featured a 360 degree turret/gun shield. The 90 mm was mounted in the rear and had terrible gun depression(the first pilot had none, and the 2nd pilot had -4 degrees of depression). The T53E1 failed to gain support as either a TD or as an AA weapon and was cancelled in 1943. The T53E1 was also very large and should be one of the tallest vehicles in WoT. The T53E1 will only compete at tier 5 due to the 90 mm gun being one of the best weapons of that tier, otherwise it would suck. 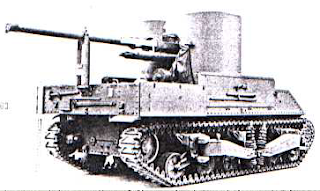 The M10 Wolverine is fine but the T49 has one historical issue: the turret progression needs to be switched. Simple fix for the T49. The closed turret couldn't mount a 76 mm gun but the open top(T67) could.

At tier 6 we will have something on par with the Dicker Max as a new tier 6, the T4. The T4 was a proposed TD that valued firepower over other stats. The T4 was based on a lengthened Stuart chassis and was armed with a 105 mm gun(T5E1). The T4 never got off the drawing board thanks to the M18 being favored by the Tank Destroyer Command.

The M18 and M36 should receive some minor changes. The top speed for the M18 w/ the stock turret should be about ~80 km/h and should be as much as a buff as the IS-7 speed buff is a buff. The M36 should be able to mount the GAA engine which will improve its mobility.

The T78, as I mentioned before, was a 90 mm GMC based on the T24(M24 Chaffee prototype) chassis combined with the M36 turret. This little project only lasted a month between July and Aug. in 1943. I am sorry for a lack of pictures for the T78 but there are none that I can find. As a tier 7 vehicle we can expect the T78 to mount a more powerful 90 mm such as the T15E2 that is the top gun on the T25/2 or the T54 90 mm gun that is a shorter and more compact weapon but has the same ballistics as the T15E2 and would fit better within the M36 turret.

The AT-3 was a postwar concept from 1952 and it is similar to the UE 57. It was to weigh a mere 16 tons and was to mount the 105 mm T140 gun(T54E1 top gun w/out the autoloader). It was a tiny vehicle with little armor and should have some of the best camo values of any vehicle. There are also two sets of tracks on the AT-3 that separates the vehicle in two. 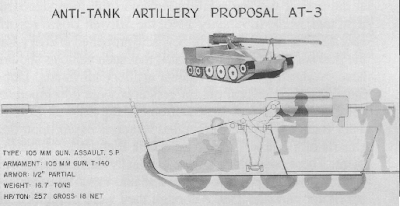 I have already mentioned in by other article about renaming the T25 the T23 AT.

The TS-31 was a concept from the 3rd Question Mark Conference in 1954. It was a casemate design with the M58 120 mm gun. The TS-31 was selected for further development which led to the T110 series of vehicles. In WoT the TS-31 should be a fairly solid vehicle being mobile, having a good gun, and has OK armor(it has a huge cupola weak spot on the right side of the superstructure) . 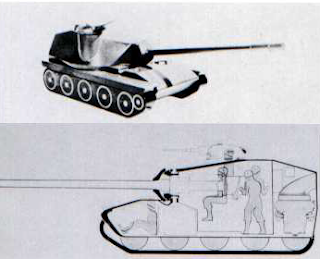 The T25E1 #13 is a heavily modified T25 medium tank(T23 chassis + prototype T26 turret). The T25E1 #13 was a test bed for various equipment including rangefinders after the war up until 1947. A proposed modification that will make the T25E1 #13 a tier 8 is a new T29-ish turret with the T5E1 gun. The T5E1 is already the top gun for the T32 and the T25E1 should have better mobility and better soft stats such as RoF, dispersion, aim time, comfort, etc.

The T28 Prototype will have a complete overhaul. I am fairly convinced that a model of a T28 Prototype has surfaced and is pictured below. This model is much more concrete than the T28 Prototype we have in game which is based off a napkin conceptual drawing. This model has nearly as much gun traverse as the T28 Prototype while being contained inside the casemate. The same guns should be used as well as similar armor values. Other stats can be played around with to find balance. 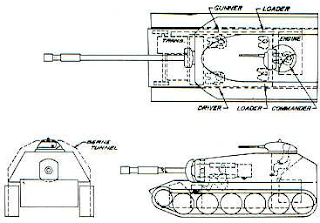 The TS-5 comes from the same conference as the TS-31. It was a shorter vehicle and seems to have ties to the T28/T95. I do not know the exact armor values but they should be very high. In WoT the TS-5 should at least have the same amount of frontal armor as the T28/T95. Side and rear armor should be about the same as the T110E3. Speed should be around 25 km/h(ballpark estimate, would be more if anything). The gun was planned to be a very large 105 mm smooth bore but the TS-5 has enough space to mount the 155mm T7E2 gun, another gun choice is a 175 mm gun that was proposed on the H3 project but that would be a major stretch  I have to admit the TS-5 might be the most unrealistic vehicle I have proposed here, but it is still an improvement over the T110E4 we have currently. 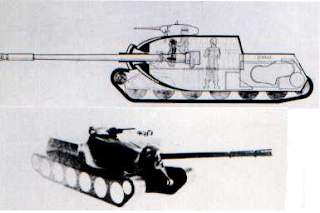 The H2 was actually a heavy tank but it would be similar to the T30 in play-style and WG can call it a tank destroyer if they want to anyways. It was proposed along with the H1 and H2 in the first Question Mark Conference. The H1 and H2 were practically the same vehicle but the H2 was planned with a T7 155 mm. In WoT this will be the T7E2 155 mm. The H1 could be represented by having the 120 mm as stock. The H2's hull armor is at a negative slope and should be slightly better than the M103 hull. The turret has very thick armor and should allow for somewhere in between -7 and -8 degrees of depression. It should be a good replacement for the T110E4 bringing a good combination of firepower, mobility, and turret armor. 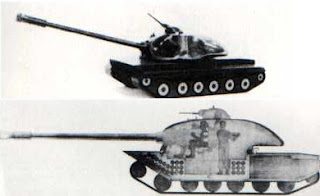 The T110E3 will have to be rebalanced due to it and the TS-5 for being so similar if the T110E3 isn't changed. The T110E3's armor will be cut back on the superstructure and only the mantlet and the nose on the hull will remain tough. The T110E3 will gain a lot of mobility with its loss of armor. The M58 120 mm should be the stock weapon with possibly the best DPM(8-9 rpm w/ 400 damage?) in WoT and -10 degrees of depression. The T7E2 155 mm should remain an option but has only slightly better DPM than right now and retains the -8 degrees of depression. The main change is that the T110E3 goes from being a heavily armored turtle to a DPM machine. Some other stats might need to be changed as well. Most of these changes(-armor and +120 mm and mobility) are also historical.

So what will all of this look like when it is presented in a tech tree? Well here you go. This might not be the final edition but it is fairly close. 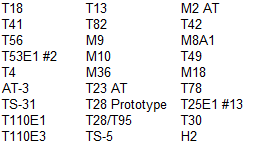