Based on some documents Yuri Pasholok came across, he designed these two tanks that could very well one day become British premiums. 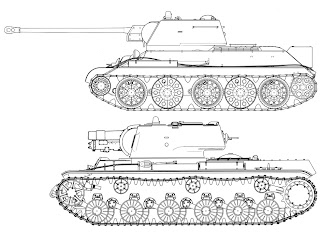 "Ensign, you scoundrel," you may interject. "These are obviously Soviet tanks! That's just some kind of silly gun on the T-34 Model 1942 and KV-1!"

As some of you may know, a T-34 and a KV-1 were tested in the US to find out what American and Soviet tank builders could learn from each other. Fewer people know that the same thing happened in Britain. While the Americans only liked some features of Soviet tanks, the British liked all of them. A lot. Aside from some minor complaints, they were ready to produce T-34s and KVs locally, with British guns. Let's take a look at what these tanks can do in World of Tanks.

The T-34 goes first. The British were planning to produce it with a 17-pounder gun. The gun in game weighs 826 kg. The S-54 on the T-34 weighs a whopping 1390 kg, so it should have no problems with overloading the tank or reducing its maneuverability.

The undeniable top gun on the T-34 is the ZiS-4, with 112 penetration and 85 damage. The 17-pounder has 171 penetration, 150 damage. This gun is comparable to the T-34-85's D5T-85BM, with more penetration and less damage. Obviously, the 17-pounder won't be a tier 5 gun, but a tier 6 premium T-34 Firefly is feasible, especially with preferential matchmaking to compensate for that reduced turret armour. Drop the ROF to 9-10, and it would be set.

The KV-1 is a little harder. Its gun isn't in the game, so that allows me to be a little creative. The rate of fire obviously won't be fantastic. The KV-2, with an M-10 howitzer (that has a rate of fire of 3-4 outside of a tank) has an in-game ROF of 2.5 RPM. The 6-inch howitzer the British proposed to put in the KV-1 has a ROF of 2 RPM. Inside a turret, and a small KV-1 turret at that, the RPM is going to drop like a rock. Even with its original 2 RPM, the tank isn't going to be very good.

However, there is a saving grace. The British put a very big emphasis on indirect fire, so their hypothetical KV would have the sights for it. The British KV could be an artillery piece like the leFH18B1. A somewhat armoured hull with a 2 RPM 152 mm howitzer in a fully rotating turret would be an interesting tier 5 artillery. Or maybe 6, since British SPGs are coming after the artillery trees are normalized.