Note: much credit goes to Thor_Hammerschlag for noticing the hull size differences.
As usual, don't expect anything published here to be implemented in WOT.

Today I got an interesting message from Thor, saying that there was something unusual on page 75 of "Special Panzer Variants" by Spielberger (btw, did you know that he actually worked as engineer for Porsche and was involved in the Ferdinand project?).

The page shows the E 50/75 hulls, however aside from the two well known Adler layouts there is another, slightly different one by Weserhütte: 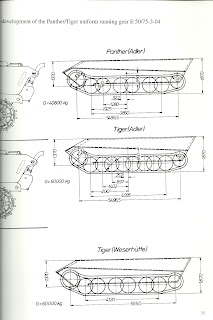 Not much is known about it other than the company was responsible for E 50 and E 75 but the interesting bit is that the chassis is about 15cm longer.
It is not known either if this was an early draft or a later development, however this extra space was likely to be enough to accomodate the planned rear drive transmission.

All in all, this is yet another shadowed corner in the already pretty obscure development of the E-Series.
I will further investigate but it's unlikely anything else will be found, especially as even Jentz and Doyle seems to have given up on this (or maybe Doyle is keeping any new data for the next issue).
Posted by Zarax at 10:35 PM