Silentstalker: This article was sent to me by the aforementioned author for publishing. If you like it, there can be more where this came from.

Edit: cleaned the worst typos, some are probably left

This is Commonwealth Uncommons. The goal here is to take a look and investigate some really uncommon and interesting designs from the UK and her Commonwealths. Today, it's Canada. I've got some probably unheard of guns, and some vehicles that might fit their way into a tank tree or premium vehicles.

I absolutely love weapons that are made and designed as a last resort, or their purpose is of arguable or debatable benefit, and you'll find that a lot of my research (particularly) into commonwealth designs tends to be a lot of stuff that was built “because they had to” rather than what they wanted. It's more interesting that way! I like the struggle to find a solution rather than simple procurement.

Named after “... a little fellow who throws a small stones with great speed and accuracy.”, the David gun was a a fairly simple idea, designed at a time when resources were of absolute importance. Make a gun that used existing 2-pounder ammunition and barrels and improve performance as much as possible. 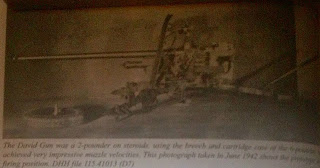 
The most impressive part of the David gun can be shown in a raw statistic- rounds would leave the barrel at 4150 fps (SS: 1264 m/s)! Compare this to the seemingly meagre 2650 fps (SS: 807 m/s) when the same ammo type was fired from the 2-Pounder Mk X. This was a true hyper velocity gun, firing at over 4000 feet per second- and, with the addition of the Littlejohn adapter and the Mk 1 Littlejohn ammo, that number increased to 5058 fps (1550 m/s)!

The gun managed to penetrate with the 149mm armor penetration while using the APCR ammo during point blank test fires on flat armor. No penetration performance of the shot with the Littlejohn was recorded (at least none that I could fine) but one could postulate a bit and ballpark the number at in the 170-180mm range, of course, this was at very short ranges.

Much like the David Gun, the Canuck gun was requested at a time when guns were at an absolute premium. The Commonwealth in its entirety was scrambling to find a replacement for the 6 pounder in order to keep up with German development, and several projects were started concurrently, such as the 8-pounder, 12-pounder, 75mm Vickers and 17 Pounder Projects. The Canadian contribution was the so-called “Canuck Gun” 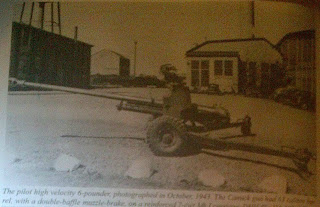 The gun was effectively a lengthened 6-pounder, stretched out from the earlier L/43 and L/50, to the L/63 length. Tests with the weapon showed a muzzle velocity of from 990 m/s with APCBC. Compare this with average of 792 m/s and 831 m/s for the L/43 and L/50 guns. Firing APCR the recorded penetration was 130mm at 30 degrees compared with the 100mm penetration of a L/43 shooting APCR with both shots at 400 yard. 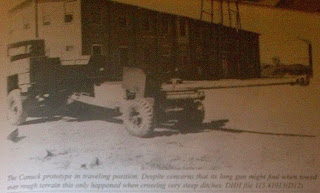 In World of Tanks, we get 105 and 110 with silver, 170 and 180mm with 'gold' round penetration (on the L/43 and L/50 respectively). I'd imagine the Canuck gun might be able to achieve 140mm and 200mm “gold” penetration, using ballpark figures. Wargaming's penetration figures are a little wonky on the 6-pounders (they're using APCBC for “AP” and using APDS figures for “APCR”) but at least we wouldn't be consistently wrong.

The Canuck was only slightly more heavy than the existing 6-pounder and as such could feasibly be mounted in just about any tank that uses a 6-pounder. It was also planned to test it in mountings in a number of tanks, supposedly it was predicted that it could be used to engage German Tigers and Panthers. The M10 or M4 tank or a SPG mounting on a Bren Carrier or Loyd Carrier were a few examples of considerations. I would particularly enjoy a RAMII in the tank tree with such a weapon.

In April 1943 plans were drawn up for a light-weight, low profile tracked 6 pounder to take either the 6-pounder or the QF Mk V 75mm (a bored out 6-pounder). 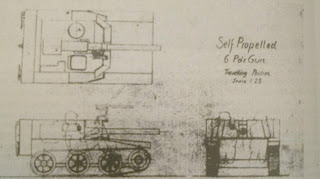 It was based off a universal carrier with one less roadwheel per side, powered by a 60 hp Jeep engine with the Jeep gearbox. It would have a crew of two and carry 70 rounds of ammunition. Total length would be no longer than 4.6m, with 1.3m high, with atop speed of 64 kmph, a gun traverse of 15 degrees in either direction, elevation of 20, depression of -7. 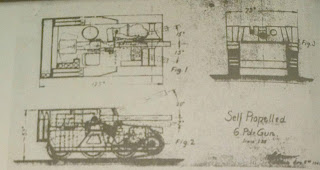 It was designed for airborne type operations, but due to the fact that even with its tiny size it failed to fit inside the Horsa gliders, it wasn't adopted. It was however, an extremely tiny tank!

The artillery users' committee considered its use as a replacement for a standard 6 pounder but this was seen as unfeasible, as the 2 man crew would severely limit the gun's rate of fire (a second carrier was suggested to carry the remainder of the crew and ammo). This would be suitable as a low-tier TD.

During 1942, there was a concern within the Canadian military about the supposed shortage of proper, effective armored vehicles, which were able to engage the rapidly improving german armor. Canadian Lt. General McNaughton made a request to mate the 25 Pounder Ram SP (later called the Sexton) with a 17 Pounder. 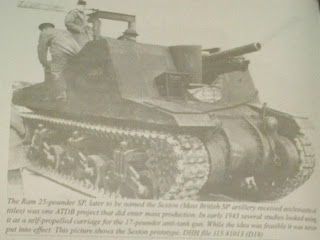 The concept was a sound one, early 17-pounders were actually built into existing 25-pounder carriages, without much modification to their recoil mechanisms- so why not simply mount it on a tank that had the same mountings? 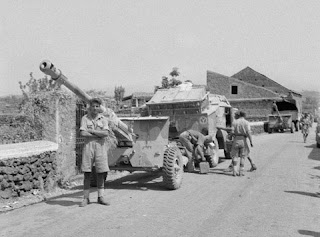 It wasn't long before a prototype was mocked up, and it turned out that the 17 Pounder was a little difficult to mount than previously expected. Once mounted correctly, the gun stuck out a bit too far from the front of the vehicle, exposing important mechanical parts to potential damage. The long gun and huge breech and recoil length kept the guns' traverse quite limited and required some significant changing of the internal crew layout of the Sexton.

There was also a plan to mount the 3.7 inch Anti-Aircraft gun (it had a superior HE round and supposedly slightly superior armour penetration at all distances) and it was claimed the two guns would be “interchangeable” with very little effort. According to documents it was less difficult to mount the 3.7 inch gun than the 17, the gun was shorter and allowed overall greater traverse. Mountings for the British pattern 3in Anti-Aircraft gun were planned as well, if weapons such as the 3.7 or 17-pounder could not be procured.

Source: Secret Weapons of the Canadian Army by Roger Lucy
Posted by Unknown at 12:19 PM