Hello everyone, this is a list of leaked official tank descriptions (you know, those short stories on top of the characteristics windows of each tank) from supertest I recieved this time from a source close to official translators, who decided to share upcoming vehicles. Some are known, some - less so. It is unclear as to whether (if at all) these vehicles will appear. The pictures were added by me.

PS: sorry for the weird formatting, blogspot makes a mess of it, no idea why.

The first prototype was manufactured in 1931 by the ACL company on the basis of the Char D1. Two prototypes were produced. Work on the vehicle was discontinued due to a faulty suspension and other unreliable parts.

This model represented France's last cavalry support tank. Development started in 1936, with 50 vehicles manufactured by Renault between 1938 and 1939.

This light tank prototype was developed by Citroën. In April 1935 the vehicle underwent trials and was deemed adequate. However, the AMR 35 tank project was preferred.

A modification of the AMX 13 with the Panhard EBR turret. The vehicle did not have an automatic loading mechanism. The vehicle was intended to fight in Indo-China. Five vehicles were built in 1954.

A modification of the AMX 50 with a welded forward body and a standard turret. Existed only in blueprints.

Developed in 1945 by the AMX company, this tank was heavily influenced by the German Panther and Tiger II designs. An order was placed for two prototypes, which were given the designation M4. Initially classified as a medium tank, the vehicle was later reclassified as heavy.

Development of this heavy tank started at the end of 1945. By the beginning of 1950, several prototypes had been developed, including the model with an oscillating turret and a 100 mm gun.

Development was started by the FCM company in 1916. Ten vehicles were manufactured by 1919. Several variants of the FCM2C were produced by 1940. In 1936 the French government requested design entries for a new heavy breakthrough tank, which would replace the Char 2C. Five companies proposed designs, the FCM company among them. A wooden prototype was constructed by 1940; it was destroyed in 1941.

Developed by the Lorraine company. Existed only in blueprints.

The Lorraine 37L was mass-produced from 1937 through 1940, with a total of approximately 480 vehicles manufactured. They were used as the basis for a number of experimental SPGs that never saw mass production.

The design was presented by the Renault company in 1937. The hull prototype was manufactured and the blueprint was developed, but the work was discontinued due to the outbreak of World War II. Developed in 1934 by the Somua company. At the start of World War II, it was considered one of the French Army's most modern and formidable tanks. After the Fall of France, the vehicle was used by the Wehrmacht. During the production period between 1938 and 1940, a total of 427 vehicles were manufactured.

In 1926 the FCM2C Champagne tank was upgraded with a 155 mm howitzer and was designated as the FCM 2C Bis. However, the previous configuration was restored the same year.

SS: the British vehicles lack descriptions, they only have names

Modification of the Grizzly tank, mounting the British 25-pounder field howitzer. Mass production was launched at the Montreal Locomotive Works in Canada, with 2,150 vehicles manufactured from 1943 through 1945.

Developed by the Alkett company in cooperation with the Krupp company. The first prototype was produced in February 1943. The vehicle was mass-produced from April 1943 through March 1945, with a total of 298 vehicles manufactured. Eight more vehicles were converted from the PzKpfw IV. First saw combat in the Battle of Kursk. The vehicle was used on all fronts until the end of military operations in Europe.

A proposed light tank destroyer weighing about 12 tons. Its most innovative feature was to be the ability to adjust the ground clearance, changing the vehicle's height from 1760 to 1400 mm. The vehice would be powered by either the Maybach HL 100 or the Argus engine. Development was discontinued in favor of the Hetzer.

The development of the E-25 was a part of the "E" program supervised by the Waffenprüfamt 6. The E-25 was developed by the Argus company (Karlsruhe, Germany) under the supervision of Dr. Herman Klaue. Existed only in blueprints. Tank destroyer on the basis of the PzKpfw 38 (t). The PaK 40 or the PaK 36(r) gun was installed in an open cockpit. Entered service at the end of 1942. The vehicle was mass-produced until the middle of 1944 and was in service until the end of the war. Known as Hornisse before 1944, the vehicle used the same chassis as a heavy self-propelled gun Hummel. First saw combat in the summer of 1943 on the Eastern front. A total of 494 vehicles were manufactured.

Developed on the basis of the PzKpfw VI Tiger. The first prototype was manufactured in the fall of 1943; it was demonstrated to Nazi leaders on October 20th. The prototype passed trials and participated in the crushing of the Warsaw Uprising. A total of 18 vehicles, not including the prototype, were produced.

Experimental tank destroyer on the basis of the prototype of the VK 3001(H) heavy tank. Two vehicles manufactured in 1942 fought on the Eastern Front. 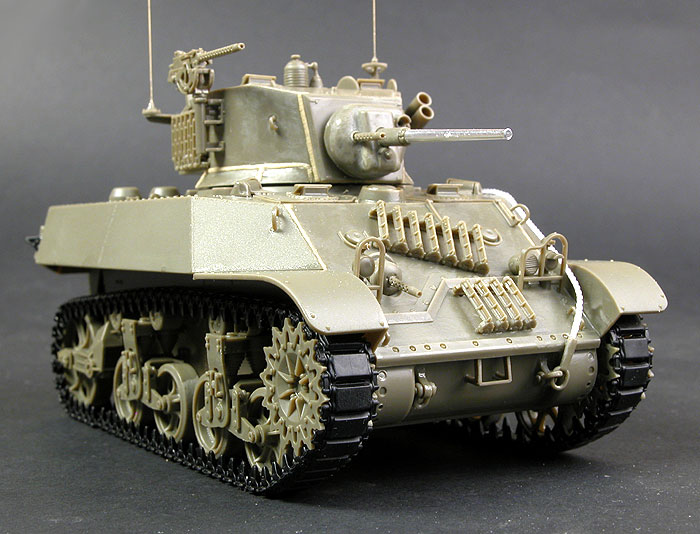 The M3A3 was a further development of the M3 light tank, featuring a redesigned hull of welded construction. Development was started in April 1942. The changes added two tons to the vehicle weight but made the fighting compartment more spacious, improving crew performance. The M3A3 was mass-produced from January through September 1943, with a total of 3,427 tanks manufactured. Of these, 2,045 were exported to Great Britain, where they were designated the Stuart V. 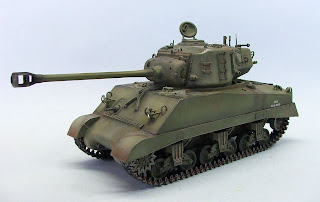 At the end of World War II, consideration was given to a redesigned and upgraded M4 Sherman. A larger and stronger turret ring would have allowed mounting of the M26 turret and a 90-mm gun. However, the M26 was chosen for mass production.

A variant of the M4 medium tank with angled hull and turret. It was developed by the Detroit Arsenal in August 1942. The changes were intended to improve the tank's protection without increasing weight or degrading other technical characteristics. Existed only in blueprints.

Development of the M1921 tank began in 1919. By February 1922, the Packard Motor Company manufactured a prototype. The tank featured a number of innovations, including a commander's cupola and peculiar tracks with wooden inserts. The vehicle was never mass-produced, but further experimental vehicles, the T1 and T1E1, were developed on its basis. 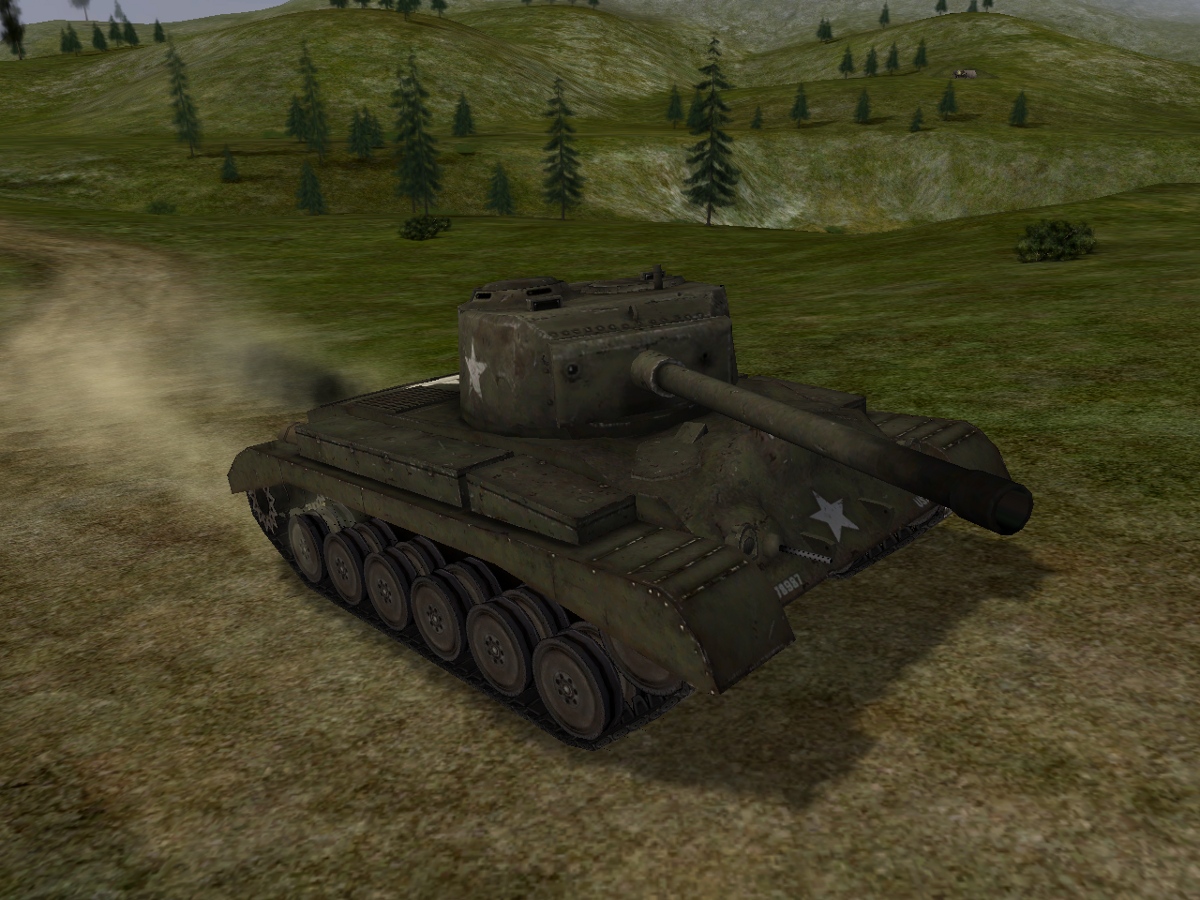 Development was started in April 1943. A prototype was produced in August 1944. Unlike its predecessor, the T23 tank, the T23E3 featured torsion-bar suspension. The vehicle never entered mass production nor saw service.

Experimental self-propelled gun on the M3 chassis. The Baldwin Locomotive Works Company started the development of the T24 in the fall of 1941. By November, the prototype was completed. The vehicle passed trials, but never saw mass production.

Developed in 1941 at Plant No. 183 under the designation A-43. A new vehicle was intended to replace the T-34 tank. The vehicle was to be equipped with torsion-bar suspension, diesel engine B-5, a new transmission and a reinforced to 60 mm front armor. The project was begun in April 1941. Development was led by I. S. Behr, lead engineer of Plant No. 183. Three different versions of the vehicle were proposed, varying in armor, armament, combat load, and speed. The estimated production date for the prototype was early 1942. However, when the German invasion forced the evacuation of the facility, development was discontinued.

A light tank destroyer on the basis of the T-60 and the T-70. The initial plans were drafted in the summer of 1942. In 1943, development was halted due to emerging difficulties in engine production and the realization that the main gun would be inadequate against increasingly heavy opponents.

The Object 416 was a medium tank developed by the Construction Bureau of Plant No. 75 starting in 1949. An early prototype was completed by March 1950. Due to problems with the turret, the prototype was not operational until the end of April 1952. By the summer of 1953, the prototype was tested and upgraded. The vehicle passed trials, but never entered mass production.

Development of the vehicle was started in July 1943. The prototype was constructed in October 1943. The vehicle never entered mass production. Developed on the basis of captured German StuG III and PzKpfw III vehicles in 1943. The modifications were made at Factory No. 37 in Sverdlovsk, with a total of 200 vehicles manufactured. Developed in 1931–1932 under the supervision of N. V. Barykov. The vehicle was mass-produced from 1932 through 1939 at the Kharkov Locomotive Factory. It was the only mass-produced five-turret tank. In the middle of the 1930s, attempts were made to upgrade the vehicle. Most of these vehicles were lost during the first days of the war. The T-35 tanks were last used at the Battle of Moscow. A total of 2 prototypes and 61 mass-produced tanks were manufactured.
Posted by SilentstalkerFTR at 11:46 AM