Hello everyone, I'd like to bring your attention to two little-known designs, that could easily serve as an EU tree tier 1 vehicle: Praga MT and Praga YNH. 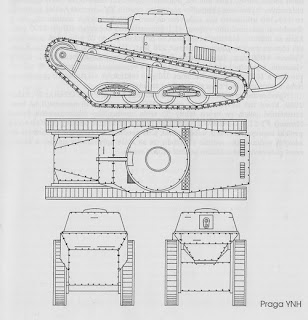 In the early 20's, the newly-formed Czechoslovak army was built according to the European standards. Unfortunately, that wasn't always a good thing. New ideas adopted slowly - and the idea of a tank was new in general. In early post-WW1 Czechoslovakia, tanks were regarded by the older generals and soldiers (some of who actually had vast experiences from the Legions, fighting in Russia) with suspicion. Indeed, the idea of a vehicle providing fire support for the infantry was given mostly to armored cars (and trains), most of which were produced in Pilsen by Škoda. These cars - although having nowhere near the terrain passability of a tank - were reliable, easier to manufacture and cheaper than tanks.
Still, the wartime successes of tanks could not be denied and the idea of a tank slowly seeped into the minds of the military staff. The first tanks, adopted by Czechoslovakia were the French surplus FT-17's. From 1922 to 1924, Czechoslovakia bought 7 of these vehicles, which then remained the mainstay of Czechoslovak armored corps for years. They however were used only for training or for military parades. These vehicles were used extensively and remained in service until mid 30's. By that time they were totally worn out and were gradually scrapped. A few stayed as "non-usable" with the army until the surrender to Germany. Although never firing a shot in anger, the FT-17 tanks influenced the early postwar Czechoslovak designs heavily.
First attempts to make an indigenous fighting tank took place in 1922, when Škoda offered the Ministry of defense to produce modified licensed FT-17 tanks. This offer was not accepted, as the ministry was concerned about the license issues.
From 1923, the Czechoslovak army bought and was using several Hanomag WD-25 and WD-50 tractors. Škoda and Breitfeld-Daněk also bought the license for these vehicles and used their suspension to produce Kolohousenka series of vehicles. The Praga company also however constructed its own small catterpillar tractor in 1925 - two prototypes were built under the designation of Praga MT ("Malý Traktor" means "small tractorů in Czech). Generally, the whole MT vehicle (especially the suspension) resembled the one of Renault FT-17. First prototype was taken for army tests on 10.5.1925, second on 7.7.1925 and the tests were performed until April 1927 by 51st Artillery Regiment in Brandýs nad Labem. After the successful tests, the vehicles were accepted for service and served with Milovice tank batallion until 1933, when they were decomissioned due to them being worn out.
Despite the opposition of certain "oldschool" officers and thanks to the success of the artillery tractors, the army started to show more and more interest in tanks. In 1926, an order was given to the Army Technical institute (VTU) by the commander of the army, gen. Syrový, to develop an indigenous light tank. A series of demanded specifications was also issued by the army - these included for example 15-20km/h speed, 12-15mm armor, 6-8ton weight, short 75mm armament or the ability to drive for 6-8 hours straight. One of the most pressing demands of the army was to make the vehicle run on gasoline-benzol-spirit mixture known as "biboli", which would allow the vehicle to be fuelled completely from Czechoslovak sources. This order has been passed to the Czechoslovak company ČKD, the owner of the Praga construction bureau.

Praga took the army demands under consideration - but before the order even arrived, another indigenous tank project was designed here, based on the aforementioned Praga MT tractor. The design dated to 10.2.1927 and held a designation of "Pancéřový tank Praga MT" (armored tank Praga MT), where MT no longer stood for "malý traktor", now it stood for "malý tank".
The suspension remained practically the same, but the chassis was prolonged and the engine was moved to the back from its original middle position. A fully traverseable turret was mounted where the engine was earlier. It was fitted with a 37mm Puteaux S.A. gun or a heavy machinegun, much like the FT-17. It is not known how thick was the armor exactly, but it can be estimated that the armor would provide protection from small arms only, given the vehicle's low weight. It was propelled by a 32hp Praga MN 4-cylinder engine and it could move as fast as 15 km/h. While not a complete disaster, this project was immediately considered obsolete. A prototype was never built, it stayed on the drawing boards.

As the second decade of 20th century came to an end, the demands on tanks started to stabilize, as more and more nations, armies and companies gained valuable experience in their construction. It was the same with Praga engineers. After the unsuccessful Praga MT proposal, the designers focused on the army order from 1926. Combining their own experience and the world trends in tank development, they came in 1929 with a light tank project, designated Praga ÚV (útočný vůz = assault vehicle), or Praga YNH (as it was sometimes designated). It wasn't a heavy vehicle: it was to weight 7 tons. The armor was projected as 15mm thick in the front and 12mm on the sides. The (rounded) turret was 15mm thick. It was to have a crew of three (commander, gunner and driver) and it was to be propelled by a 55hp Praga N V4 engine, allowing it to move as fast as 25km/h. It was supposed to be equipped with a Vickers 44/60mm gun (ČKD was an owner of the license for these guns) and with one machinegun.
This project was introduced to VTU in early 1930. However, despite being more advanced than the MT project, it still had many construction elements (and flaws) of the FT-17. The army was not interested in this project, because it didn't fully correspond to the 1926 demands and also because a new set of demands came in 1930 and the Škoda development moved ahead in the meantime. Posted by SilentstalkerFTR at 4:45 PM