Part 5 will be the final part of the Czechoslovak tank tree series. In the previous parts, the most important and unique vehicles were displayed. This last part will deal with some of the more obscure vehicles and with how it would all fit together. 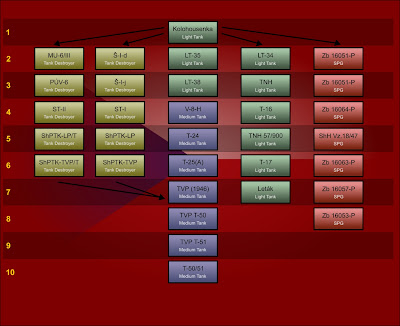 This is how it would basically all fit together (click the picture for bigger version). It's not perfect, but it would work. If you are interested in details, refer to the individual parts.

As Billy Mays would say: "But wait, there's more!". It is possible to make the tree with following additions:


- tier 8 light tank, Leták 85. Basically, there are two versions of Leták: one with straight frontal armor and one with segmented "pike nose" frontal armor. The latter one could serve as a tier 8 LT. The goal was to make it as much compatible with the Soviet designs as possible (for example by using the same engine as T-34). The following version could be also armed with the Soviet 85mm gun.

- alternative Soviet medium branch - most Soviet designs, license-produced in Czech republic were modified - some more, some less, but the differences were there. Probably the most different is the T-34/100, which is NOT the LB-1 T-34/100, so popular on WoT forums these days. This was an indigenous modification, proposed by Konštrukta Trenčín (a Slovak company) from 1953, there were two variants with slightly different turrets (never reached serial production, as it had some flaws and it was generally easier to just start producing T-54's later on. There might be a separate article on Czech tank modifications later on from me. Also, as you can see, the Leták vehicle would be compatible with this alternative branch, as it was historically constructed to use the Soviet components

- tier 10 artillery - this was achieved by simply pushing the whole branch one tier up. Two vehicles were added: SD-76M (Czechoslovak version of SU-76M in its SPG configuration) and Turán (105) - a Czechoslovak post-war construction, an attempt to mate a 105mm howitzer with leftover Turán chassis.

This is how it would look "on paper": 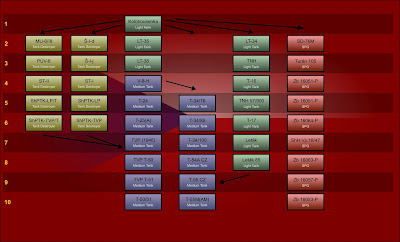 There is a broad scale of vehicles I haven't implemented in this tree, including the whole Škoda T-2X line (T-21, T-22, T-23M), the LT prototypes, the "heavy" tanks (T-III, Š-III), obscure prototypes and stuff, that was simply weird (Atypický tank Tatra).

Let's have a quick look at some of the vehicles, that could become premium tanks. Please note that as the proposed Czechoslovak tree has no heavy branch per se, it's kinda pointless to make heavy premium tanks, as there are no regular heavies to train the crews for. They could however be used for the EU tree.

Škoda Š-III was a from the early 30's (first drawings are dated to 1931). The work however took quite some time (until 1936). The vehicle was very bad - underpowered, the engine overheated, undergunned and by 1940 (when the Germans took over the prototype) totally obsolete. Roughly 18-19 tons (two different prototypes), 180hp-220hp engine, 32mm armor, 25km/h, A9a 47mm cannon. One prototype was taken over by Germans and probably scrapped after 1942. Looked like this:

Tatra T-III was an alternative design from Tatra (the roman III number means "heavy" in Czechoslovak tank designation), designed as a heavy breakthrough vehicle in early 30's. The prototype was ready in 1936 and it was designed to hold the same turret as Š-III. Tests were conducted in early 1937 and the two prototypes turned out to be plagued with faults and broke down all over the place. The army didn't accept the vehicle (by 1938 it was totally obsolete) and the prototype got to Germans, who tested it. 16,4 tons, 16-32mm armor, 276hp engine, 35 km/h, 47mm gun. Only turretless hulls existed AFAIK. Tiger 75 - after the war, Czechoslovak army used one captured Tiger I vehicle as a weapons testbed. Notably, it was equipped and tested with the 75mm A18 gun with an autoloader (the gun intended for the ill-fated T-25 project). No pictures exist as far as I know. Could work as a tier 6 heavy.

Oh yes, and there's also "Atypický tank Tatra", an ugly vehicle based on the T-III suspension. The basic idea behind it was that in any usual tank, the driver can't see shit and has to rely on the commander to tell him what to do. So the engineers in Tatra came with a brilliant solution - put every crewmember into the turret and the driver on the roof (he'd sit in the small cabin designated 7 on the drawing):

The sensitive parts were armored quite well: for its 16 tons, the vehicle had up to 50mm of armor and a 47mm gun. Luckily, this vehicle stayed on the drawing boards.

Škoda T-21 (Š-IIc) was a mediocre medium tank from 1937. 16,7 tons, 237hp engine, 50km/h, cca 30mm armor (10mm on the back), 47mm A9 cannon. Could make a T4 premium medium tank. Several axis countries (Hungary, Romania, Italy) tested it, but most found it unsatisfactory and the vehicle prototype was returned to the Škoda company. T-21 was also license-manufactured in Hungary later under the designation "Turán". This is how it looked: Škoda T-22 was a slightly improved version of the previous vehicle, made by Škoda in 1941 after the failure of the T-21 - it was one ton heavier, had a 250hp engine, but it was a bit slower. It wasn't a bad tank per se, but it came too late, it was obsolete by the time it was introduced (late 1941), it was also plagued by a huge number of technical problems, causing the Germans to lose interest in its development. A variant thereof was the T-23M prototype. The main difference from the T-22 was a different steering system (not hydraulic, but mechanical, servo-assisted). Just like the T-22, it was plagued with problems, which caused the Germans to stop the development. The prototype survived the war and it was presented to the new post-war Czechoslovak army, but by then it was terribly obsolete (47mm A11 gun, 50mm armor, 18 tons) and was scrapped soon afterwards. All of them could make nice lowtier medium prototypes.

S.U. ("Střední Útočný", "Medium Assault" also designated Š-II) could also work as a tier 2 light premium tank. It was the predecessor of the famous LT-35 from 1933. It was designed as a response to the LT-34 and tested in 1934 by Czechoslovak, Romanian and Yugoslav army. Results of those tests are not known, no army bought this vehicle - but it paved the way for the LT-35. It weighted 7,5 tons, had 8-15mm armor, a 109hp Škoda V4 engine and it could reach 30 km/h. It was armed with a low-velocity 47mm A2 cannon (later 37mm A3). It was armed with Schwarzlose machineguns - a lot of them stayed on Czechoslovak territory after the Austrian Empire dissolution and they were used deep into 30's. Picture: Panzer IV and Panzer V Panther could both serve as Czechoslovak medium vehicles. Panzer IV was pressed into service in 1947 under the designation T-40/75 - only long-barrel variants were used (in 12/1949, the army had 82 Panzer IVs in service, 21 of which were Ausf.G, 43 were Ausf.H and 18 were Ausf.J). There were even hybrid models - one had Ausf.J hull, Ausf. D turret with 75mm L/48 installed. None of these vehicles were improved by the army (there were projects to for example use ČKD steering system, which was deemed better than the original German one), as it was decided these tanks were only temporary. Last of the vehicles were pulled out of service in 1955/1956 and in 1955, 45 were sold to Syria. Turrets from scrapped or damaged Panzer IVs were also used as fixed structures for border protection, there were plans to use them on river boats and armored trains. Czech Panzer IV also appeared in war movies. The picture is from 1966: A picture from "Liberation of Prague" movie An interesting moment: destroyed Panzer IV in the movie. Yes, it was a real working Panzer IV and yes, the moviemakers really destroyed it This Panzer IV was sold to Syria Panzer V Panther was not actively used by Czechoslovak army as a frontline vehicle, but several dozen were restored in 1949-1952 and stored in warehouses as second-line unit equipment in case Czechoslovakia gets attacked (under the designation T-42/75). By 1952, 32 Panthers were refitted and stored this way, but after that, the licensed production of T-34/85 was underway and there was no need to use captured German vehicles anymore. A lot of Panthers were stripped and used as improvised "Bergepanthers", or engineering vehicles. Last of the Panthers were pulled out of the reserves in 1959, some were sold to civillians and at least one Panther was used this way in the 70's (with a Soviet V-2 engine instead of the ogirinal Maybach).

Here, a Bergepanther helps to dislodge a train, that was pushed into the river by flood in 1958: There are quite a few options for the premium light tanks. Most aren't very interesting, as they form lowtier failed alternatives to their more successful competitiors. Namely, the Praga P-IIb, T-11 (an improved LT-35 for export - Afghanistan (cancelled), Bulgaria),  T-12 (also designated Š-II-j, an improved LT-35 for Yugoslavia from 1937, different turret, only prototype), T-13M (upgunned LT-35 prototype), T-14 Personally, I am not a fan of premium artillery vehicles, but there were several candidates, mostly Russian designs used in Czechoslovak army, or some indigenous designs such as the (possible high tier) 240mm "Kominík" self-propelled mortar designed in 1957.

Again, there are more options here - Czechoslovak SD-76 (licensed SU-76), SD-100 (licensed SU-100, produced from 1953 till 1957 in ČKD Prague - 771 were made, out of which 460 were used by the army and the rest was exported. They served till early 60's, when they were gradually pulled out of service and sold to other countries. Czechoslovak export SD-100's, sold to Syria and Egypt, fought during Suez Crisis in 1956, the Six Day War and the Yomkippur War).

Another interesting possibility is the StuG III re-armed with Soviet 85mm gun (unknown, which model exactly) - there was a project for that, stayed only on paper though. The same goes for 85mm Hetzer. Another interesting project was the VOSS I and VOSS II. VOSS I was a 1941 Škoda project to mount the Czechoslovak 75mm A16 gun on the T-21/22/23M chassis and use it as a tank destroyer. The development was scrapped very soon, but the original drawing was found in the Škoda archive. A wooden mockup also existed. VOSS II was the similiar vehicle with the 150mm S.I.G 33 instead of the 75mm gun. Well, that's it. I hope you enjoyed the series :) Let's hope some Czechoslovak vehicles make it to the game and we'll get to drive some in World of Tanks.

Posted by SilentstalkerFTR at 4:02 PM