yesterday it has been sort-of confirmed (well, confirmed again) by Storm that Wargaming has not abandoned the tier 7 light tank Aufklärungspanzer Panther idea. As an upgrade to the VK2801, it sort of fits - it's big, heavy and cumbersome. Let's have a look at this vehicle. 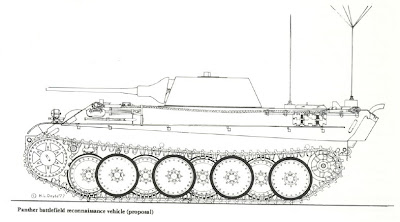 Not a lot is known about the recon Panther. It was a project from early 1942. W.Spielberger in his book "Panther and its variants" (Panther und seine Abarten) states:

"Also worth mentioning here is a recommendation by the Ministerium für Rüstung und Kriegsproduktion from 1942, calling for the Panther to be built as a recoinnaissance vehicle along with the planned Leopard combat recoinnaissance vehicle. The turret under consideration had originally been developed by Daimler-Benz for the 8-wheeled Panzerspähwagen ARK. With somewhat increased armor, it was to be used on both the Leopard and Panther recoinnaissance vehicles."

So, as you can see, it was basically a Panther hull with the Leopard turret. It was to be armed with a new 50mm gun, using the KwK 39 L/60 barrel - the contract for development of this gun was awarded to Krupp and Rheinmetall in January 1942. First units were scheduled to be manufactured in October/November 1942, but the development never really continued, it stayed in the "that's a cool idea" phase, much like other German projects. And that's basically it. Not much else is known for sure. We can however look at the planned properties of this vehicle, based on the research.

What would be the point of even proposing such a massive vehicle. Books don't mention this specifically, but after consulting some people, who are big fans of the German vehicles, we came up with following conclusions:

- existing Panther plants, making a Panther based vehicle is cheaper than building a new plant just for that one tank
- the Panther hull was only marginally more expensive than the Panzer IV hull (note that by 1945, Panzer IV's were scheduled for phasing out and were to be replaced by the Panthers)
- the engines and drivetrains were already there also

Historically, the Panther belongs BEFORE the VK2801 (VK2801 was a later project), therefore we can theoretize it will be heavier (otherwise putting it on tier 7 instead of 6 makes no sense), which means the hull will most likely have the full armor of the Panther.

The turret is more interesting. Spielberger mentions a Leopard turret, while Hilary Doyle (in his Panzer Tracts 20-2) mentions several types of Leopard turrets. The most common variant is already in World of Tanks. Doyle mentions that the turret is very similiar to the Sd.Kfz.234/2 turret (a heavy armored car with a 50mm gun). The turret had 50mm frontal armor sloped at 20 degrees, the sides are 30mm thick at 30 degrees. It's quite possible the ingame AP will use this as a stock turret (quite sure in fact, because the Leopard turret is the most historical option) and the VK2801-ish turret as an upgrade. Second option is the Schmalturm (unlikely, this would make the Panther practically a clone of the medium one). Third option is the Beobachtungsturm (from the artillery vehicle, I'll get to that later).

The gun - all we know it was supposed to be a 50mm L/60 - Doyle uses the KwK 39/1 designation. Its (ingame) properties are unknown, but unlikely to differ from the KwK 39, because most of the work was focused on pressing it into the smaller turret. It's also unlikely that the vehicle will be armed only with a 50mm gun. I think that when we look at other tier 7 light tanks, we can expect the (unhistorical but necessery at this point) 75mm L/70 gun. Personally, I very much doubt the 88 will make an appearance, as this would require a massive turret (some sort of Schmalturm), making the vehicle basically a copy of the medium Panther. L/70 seems to be an acceptable compromise.

Engine - well, this is where the big difference will assumingly lie. I think we can assume the original stock engine to be the HL210/HL230 (650-750hp). The top engine - my guess would be the HL234. This 750hp (Spielberger states 850hp) engine was used in Panther II variant under the designation Gerät 544. Now, I am not sure it would fit into the AP, but we can definitely expect stronger engines than the ones of the medium Panther. Another option would be the MB507 (850hp) Panther variant, considered for Panther Ausf.G. A rather exotic option would be the GT 101 gas turbine (1150 horsepower).

How does it fit together, what can we expect ingame?

Please note that this part is a pure speculation. Basically, what we can expect would be a very heavy "light" tank, possibly a passive scout.

First, let's have a look at how the vehicle will move. Let's take the 8.3 (!) VK2801 as a comparison (because not everyone had the possibility to test the 8.4 one). The VK2801, in its top configuration, has roughly 26,1 hp per ton (this influences the acceleration a lot, but also the steering to some extent).

And what about the Aufklärungspanzer Panther? Let's say it'll have the Leopard turret, 50mm gun, a 750hp engine (eg. a somewhat stock variant).

Well, it seems like the Aufklärungspanzer Panther is not THAT bad, even though it sure looks big and heavy. If we upgrade the engine even more (HL234, 750kg, 870hp ingame), we'll get at 23,3hp/ton and that's really not terrible. A fun fact: if Wargaming decided to go wild and install the GT 101 jet turbine engine (450kg, 1150hp), we'd get whopping 31hp/ton.

What is NOT the Aufklärungspanzer Panther

There was one more proposal based on the Panther chassis, shown in Doyle's Panzer Tracts 20-2: the "Artillerie-Panzer-Beobachtungswagen Fahrgestell Panther". Basically it was an armored artillery spotter post based on the Panther hull - there were several turrets considered, including a modified regular Panther turret with a 50mm KwK 39/1 L/60 gun, or a special Beobachtungsturm (I mentioned in the turret section). Most turret options were however equipped with a mock-up wooden gun. The vehicle was equipped with very advanced series of optics, including a rangefinder, so it can be expected the viewrange of such a turret in WoT would be very high. This is how it looked: 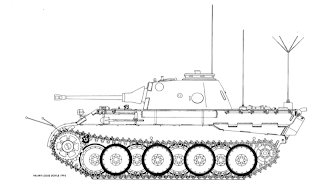 And here a closeup of the turret 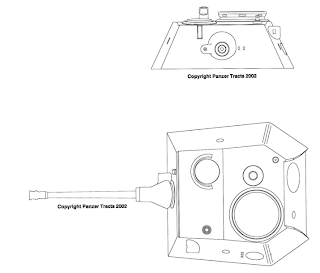 Hard to tell, how will WG implement this vehicle. Could be a relatively decent tank, could be a disaster. Let's hope it's the first.
Posted by SilentstalkerFTR at 11:23 AM